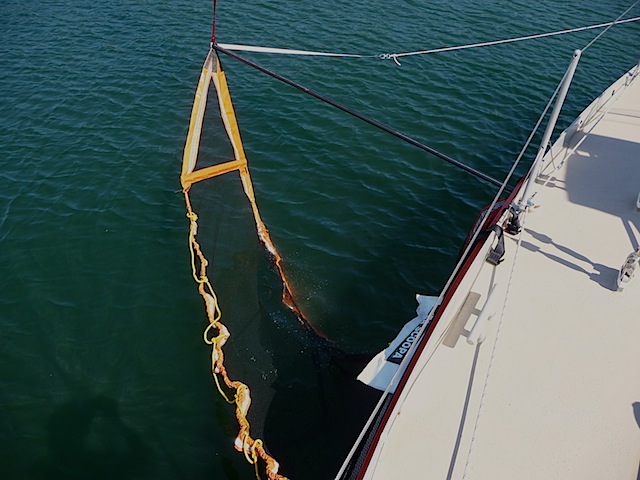 YOU MAY RECALL we ran some SAIL magazine MOB drills aboard Lunacy back in early June. Hopefully you also read the article that ran in the comic in the August issue (which, of course, came out in July) and have viewed the video posted on the SAIL website, narrated by yours truly. Since then I’ve been in touch several times with Robert Wright, inventor of the Sea Scoopa, one of the MOB recovery products we tested. In light of the comments he has made, I thought it wise to expand my evaluation of the Scoopa here on the blog.

First, I can only reiterate: this is the only MOB recovery product I’ve ever seen that truly does make it possible for you to retrieve an unconscious or completely incapacitated MOB victim and bring them aboard a boat with high freeboard without putting someone in the water to help them. 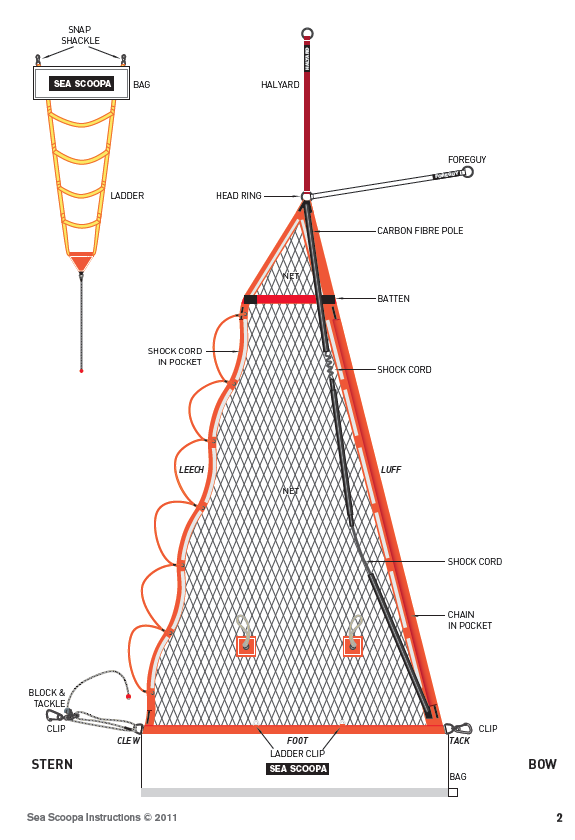 Essentially, the Scoopa is a small trawl net that is deployed alongside a boat with a small carbon-fiber outrigger to hold it open (see photo up top). When stowed, the net and the outrigger pole, which breaks down into segments that are strung together with an internal shock cord, fit into a long turtle bag. This can be folded into thirds and stowed away somewhere convenient; when deployed for use it is strung along the top of a boat’s topsides thusly: 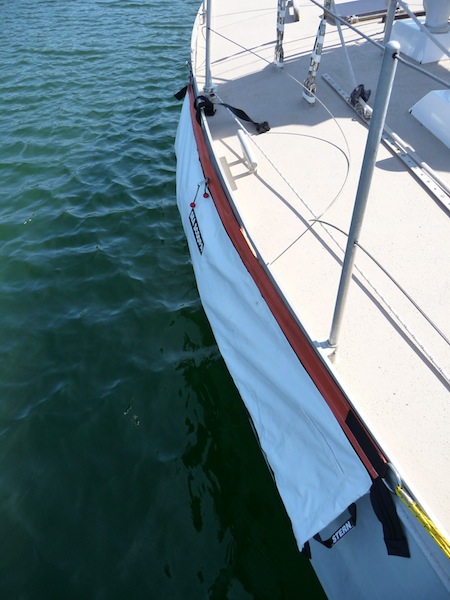 To use the Scoopa, you zip open the turtle bag and attach two lines to a pair of strops fastened to the end of the outrigger pole–a foreguy, to control the pole’s fore-and-aft orientation, and a hoisting line, which on most sailboats will be a topping lift or halyard. By first raising the hoisting line a bit, you can quickly stretch out the segments of the pole so that they lock in place together. Controlling both lines you then lower the pole so that the net is set perpendicular to the boat with its leading edge, which is weighted with heavy chain, sunk into the water.

During our tests, conducted in very calm conditions, we set the outrigger pole more or less parallel to the water and had no trouble scooping up SAIL staffer Adam Cort, who was very buoyant, as he was wearing both a PFD and a drysuit. Bob Wright advises, however, that the pole normally should be set lower than this to ensure that the net’s leading edge is sunk low enough to capture less buoyant victims. The instructions say the end of the pole should be set 300mm (about a foot) above the water’s surface. It is also important, however, that the pole end doesn’t get caught by waves, so it may well be necessary to raise it a bit if conditions are rough.

The critical part of the process, of course, is getting the victim into the net. To do this the recovering boat must be maneuvered directly alongside the victim in the water, with the boat carrying about 1-2 knots of speed as the victim is scooped up. On the one hand I think you’ll find it much easier to control a boat and come alongside a victim with some way on, rather than having to stop the boat right next to them. On the other hand you must be very careful to have the boat’s engine in neutral during the final approach, so that there is no chance of catching the victim in a spinning propeller.

In an ideal scenario the helmsman will be able to steer the boat and control the engine while at all times having the victim in view. Lunacy, though she is a high-sided boat, has a flush deck and narrow stern and is steered with a tiller equipped with a hiking stick and has her engine controls well offset to one side of the cockpit, so this was no problem for us. On some larger cruising boats with wide sterns and single wheels on centerline pedestals, the position of the helmsman may be more problematic. 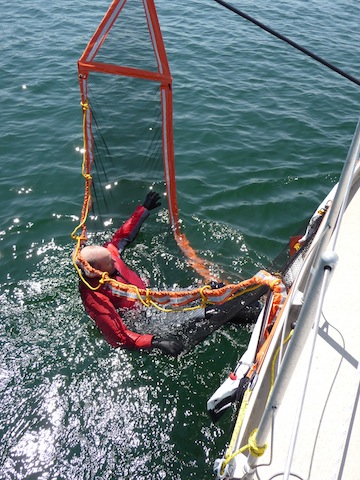 Again, in the calm conditions we had, scooping up Adam was a piece of cake. In rougher conditions it would certainly not be so easy. Bob Wright notes, however, that in his tests he has had “100% success” recovering victims in winds as high as 30 knots.

Once the victim is captured in the Scoopa’s net, he or she is brought aboard by parbuckling them horizontally up the side of the boat. To do this you must simultaneously take tension on the hoisting line while easing the foreguy, so it is a good idea to have both controls led to the same place if you don’t have a lot of crew aboard. As the victim is rolled up to the boat’s gunwale in the Scoopa’s net, the shock cord inside the outrigger pole is stretched very taut as the segments of the pole are pulled apart. The tension on the cord during our test was so great we were afraid to bring Adam all the way to deck level lest the cord snap. Bob Wright advises, however, that the shock cord is a special solid-core “SOLCOR” cord manufactured in New Zealand and insists that there is in fact no risk of this happening. 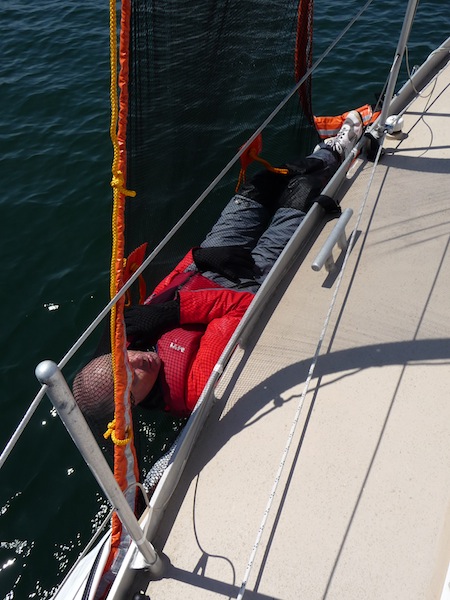 Our bottom-line impression of the Sea Scoopa is that it is very effective, well designed, and well made. Its main drawbacks are that it is bulky and heavy and that deployment is complicated and a bit involved. As I noted in the magazine, this is certainly not a piece of buy-it-and-forget-it gear you can leave in a locker until it perhaps is needed someday. It took us nearly an hour to rig our Scoopa for the first time, as we had to install various strops and shackles along Lunacy‘s toerail to get it properly positioned and tensioned. Once these adjustments are made, the unit can be deployed much more rapidly (Bob claims it can be done in as little as two minutes), but still, to be most effective the Scoopa should be stored on deck, all ready to go, which may not be practical on many small-to-midsize yachts.

Most importantly, it is very necessary to practice deploying and using the Scoopa before you ever need to use it for real.

The other big drawback to the Scoopa is that it is not at all cheap. Bob quoted me a price of $3,200 US, with an extra $300 for the optional boarding ladder, which made it by far the most expensive piece of MOB recovery equipment we tested.

The price, of course, seems rather high in that this is a piece of gear you pray you will never need to use. On the other hand, if you ever do need it, $3,200 will seem a very small price to pay for being able to efficiently save someone’s life.