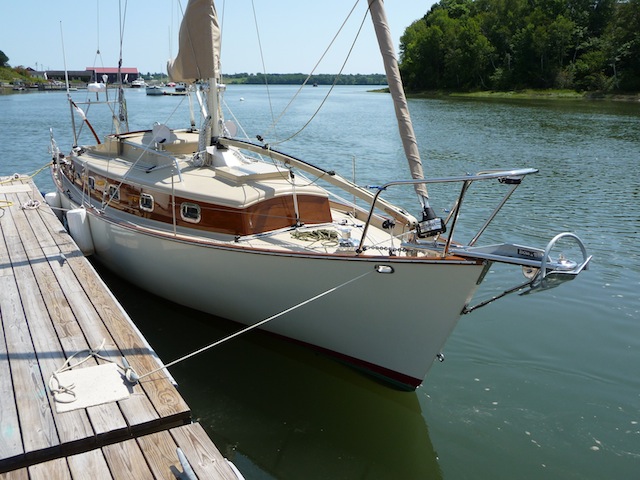 AFTER I FINISHED UP my solo mini-cruise last week, I paid a visit to the Lyman Morse yard at Thomaston, Maine, and at long last laid eyes on Petrel afloat. She’s the brainchild of designer Jay Paris, a colleague at SAIL, who has been fiddling over her creation for almost three decades now. I first met her in utero, in a shed behind Jay’s house in West Bath, about 12 years ago, and I have to confess I never thought I’d see this day.

Jay’s basic brief to himself was for a small ocean-capable shoal-draft cruising boat with narrow beam and a long waterline. After inspecting her, I remarked that Petrel looks more-or-less like a sharpie, and Jay didn’t really quarrel with that. Her hull, built by Walter Greene back in 1983, is wood-epoxy over an Airex core. Dimensions are: 32′ LOA; 27’6″ LWL; 8′ Beam; 6’9″ Waterline Beam; 2’9″ Draft (board up); 5’6″ Draft (board down); 7,950 lbs. Design Displacement; 8,500+ lbs. Actual Displacement.

She is chock full of all sorts of clever little custom details, some of which you’ll get a sense of from these pix: 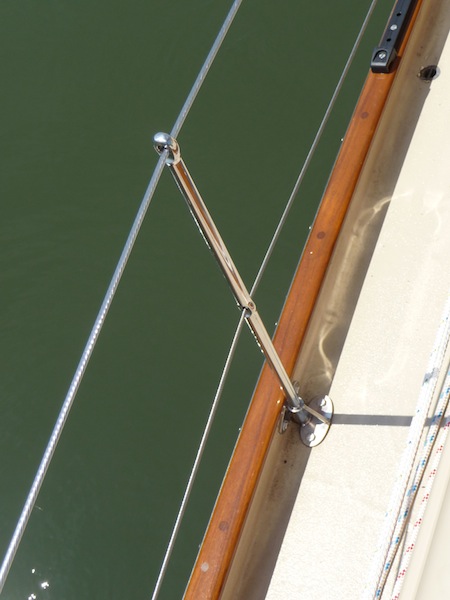 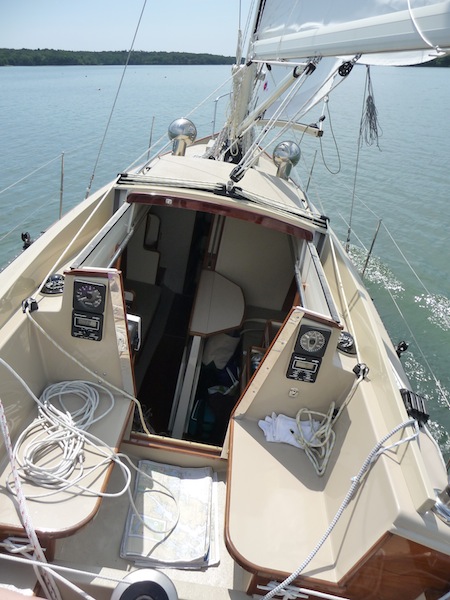 Clever under-the-dodger seats for staying out of the weather (the dodger itself has yet to be fitted). Note the exotic Stowe instruments, which are also almost 30 years old 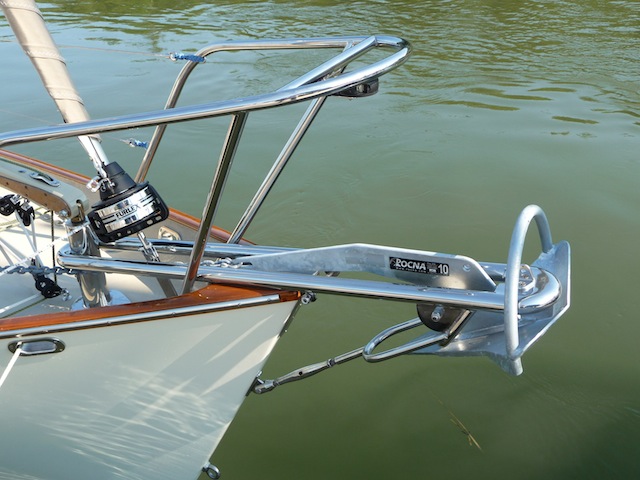 Custom stainless steel bowsprit perfectly configured to receive a Rocna anchor. An A-sail or large headsail can also be tacked down here 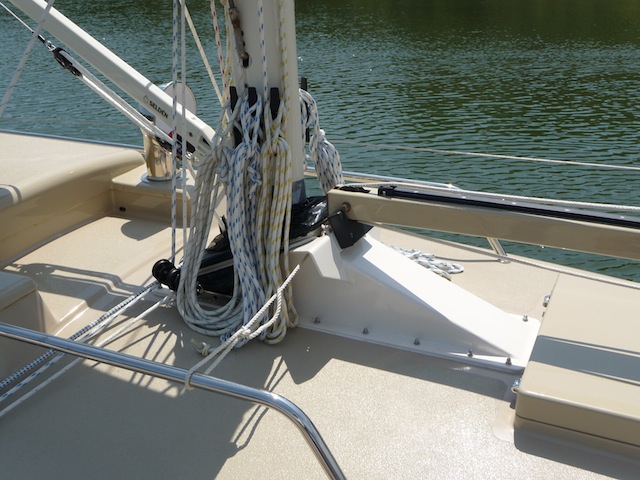 Mast partners designed so the keel-stepped mast can be stepped manually. The mast is a lightweight semi-custom carbon-fiber spar by Selden. The mainsail boom (not shown) is aluminum. The jib-boom is foam-cored wood 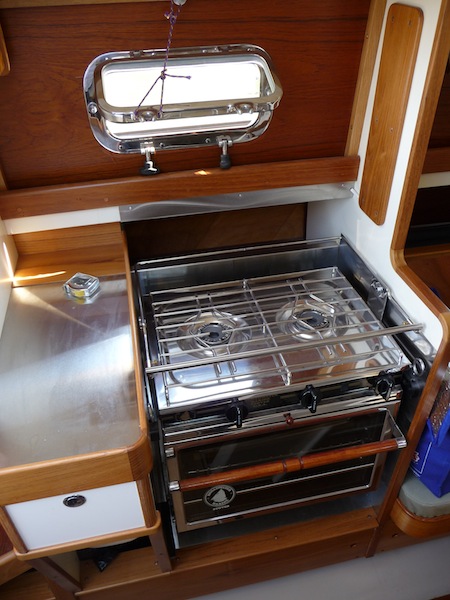 Companionway galley to port. The stove is on a custom mount that pops out a few inches to increase clearance when cooking at sea 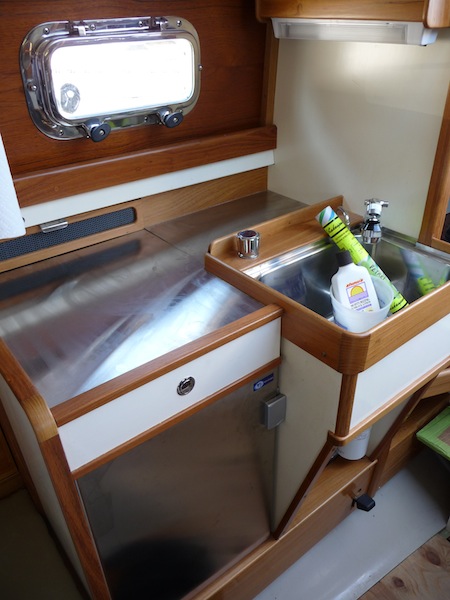 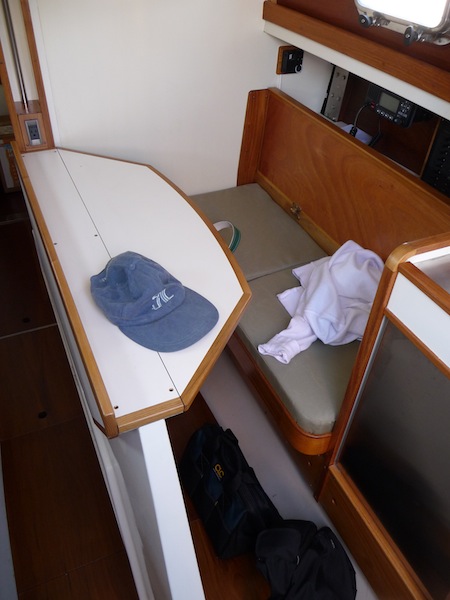 Saloon to starboard. The drop-leaf table is mounted on the centerboard trunk, which is fabricated out of copper-nickel, a naturally antifouling metal 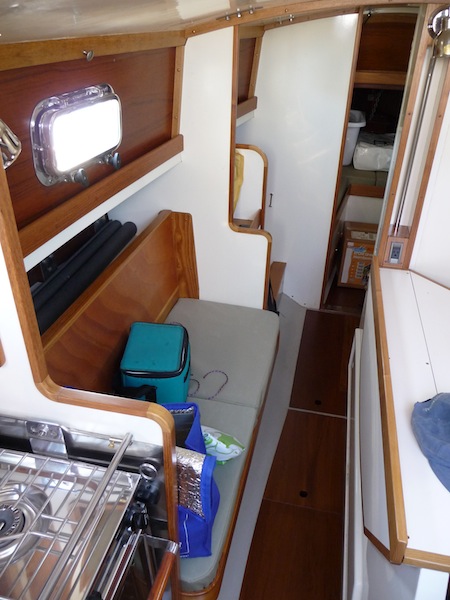 Saloon to port. There is also a small head and a full-size V-berth forward

I spent a few hours with Jay and his bride Phyllis sailing Petrel on the St. George River south of Thomaston. She is a very slippery vessel. Though we had only working sails set (the mainsail and a small club-footed jib), she performed admirably in the light conditions we had. Sailing closehauled in 10-12 knots of apparent wind our best speed was about 5.5 knots over the bottom; downwind in 3-5 knots of apparent wind she kept moving at 2-3 knots. 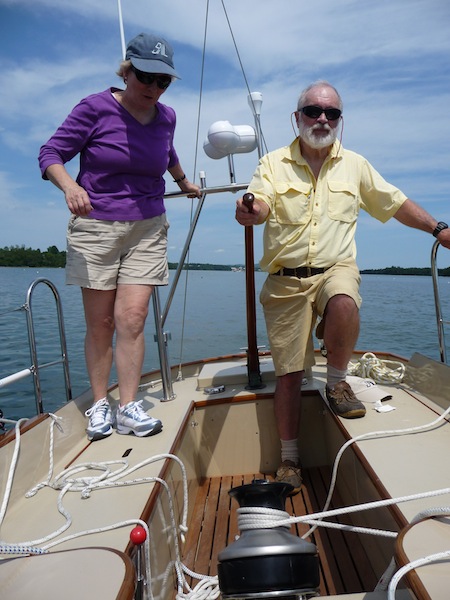 Jay at the tiller, with Phyllis kibitzing. The tiller, a gift from a friend, is from a 1951 Rhodes Whistler 36 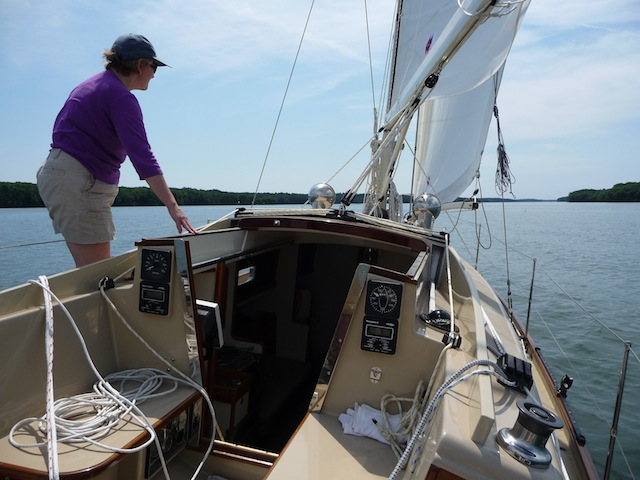 Close-reaching in a zephyr. Most all lines forward are led aft to the cockpit 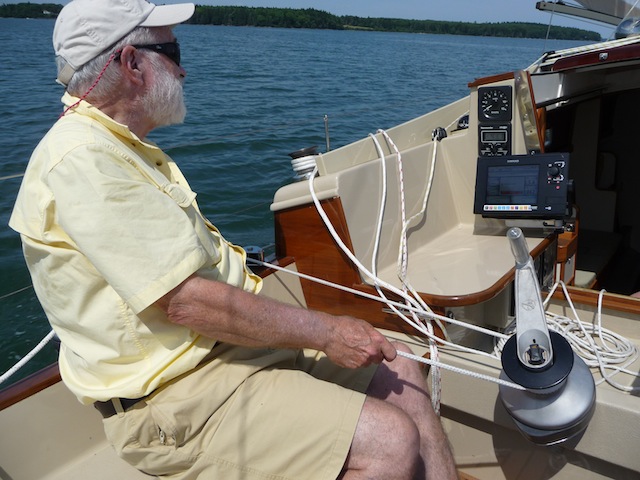 Jay trims the jib. Headsails are trimmed on one central three-speed primary winch. The double-ended mainsheet is trimmed on smaller winches mounted either side of the cockpit. There are also two small coachroof winches. All winches are designed by Jay and were built by Aeromarine. Note also the position of the chartplotter, which is on a custom bracket that flips out and around from inside the cabin, allowing for cockpit navigation while keeping the companionway clear

What impressed me most was how closewinded Petrel was. Strapped down tight she was fully powered up at an apparent wind angle of about 28 degrees, but we could pinch as high as almost 20 degrees and still keep her moving efficiently. Her wake was exceptionally clean (Jay himself remarked on this several times, with self-evident pride).

This is what she looks like under the water with her board down, per a half-hull model Jay had made:

Note that her rudder was redesigned after the model was made and actually looks like this. Plus there’s a little skeg in front of the prop to help shed pot warps: 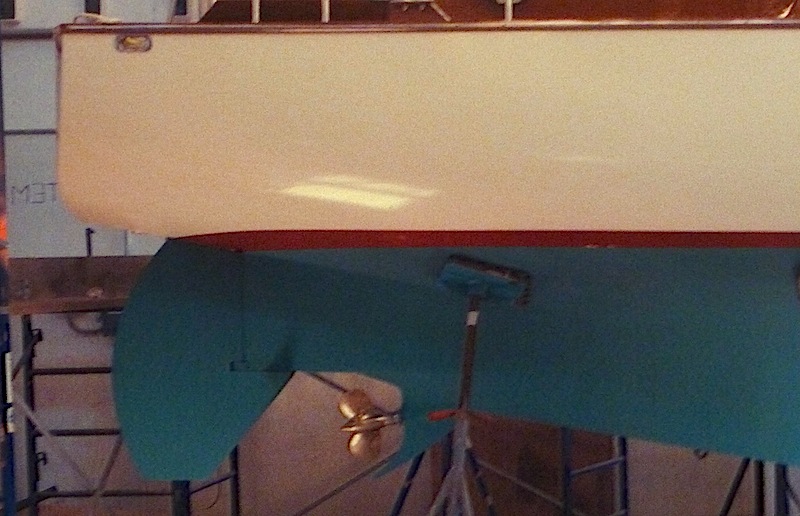 If you’d like to inspect Petrel yourself, she’ll be on display in the water at the Maine Boats Homes & Harbors show in Rockland starting tomorrow and through this weekend. Be sure to tell Jay I sent you.

ALSO SEEN IN THOMASTON: While searching for a toilet prior to our sail we took a little wander inside one of the big sheds at Lyman Morse and found this little weapon, SpeedDream27, hull number one of a prototype for a radical 100-foot speedster that aspires to the title of world’s fastest monohull: 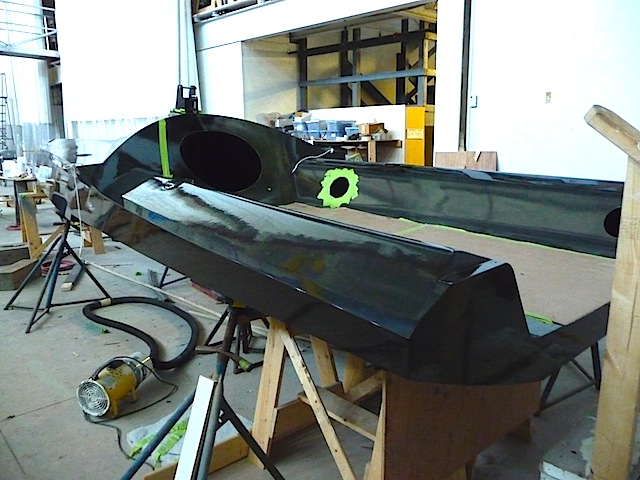 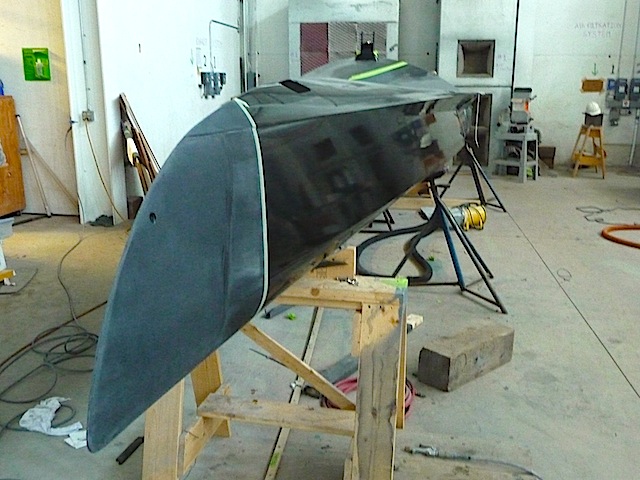 Down on the docks we found this gorgeously bright work of art (yes, the hull topsides are bright, too): 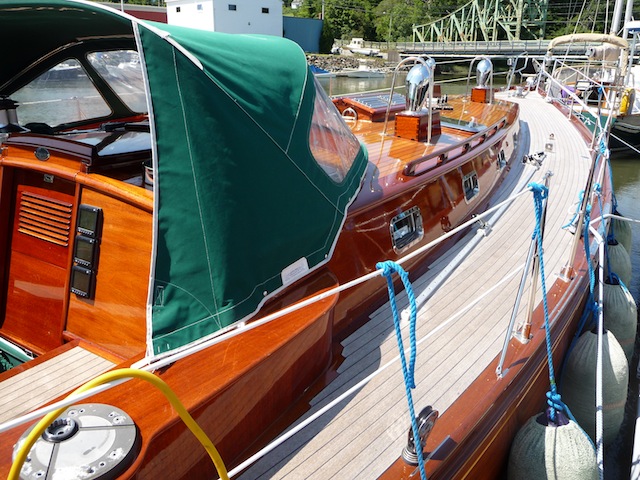 Finally, sitting on the hard waiting for a new owner, here’s that trimaran I was telling you about last week: 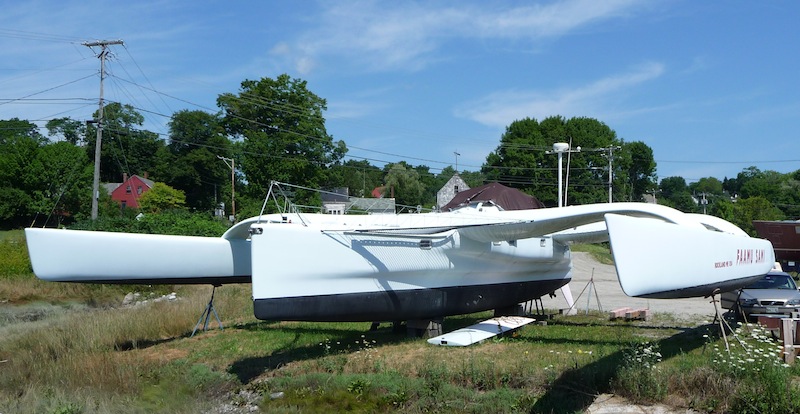 How’s that for a coinky-dink???

UPDATE: Here are a couple of more pix I’ve recently received of Petrel sailing on the St. George, taken from off the boat by Bill Henderson, a buddy of Jay’s who met us in a skiff at Broad Cove: 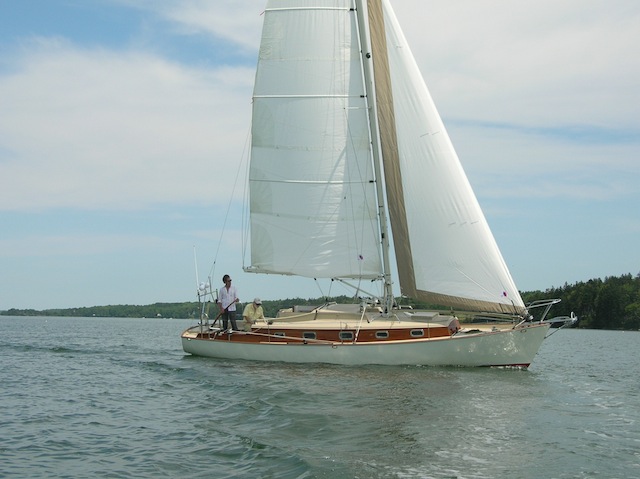 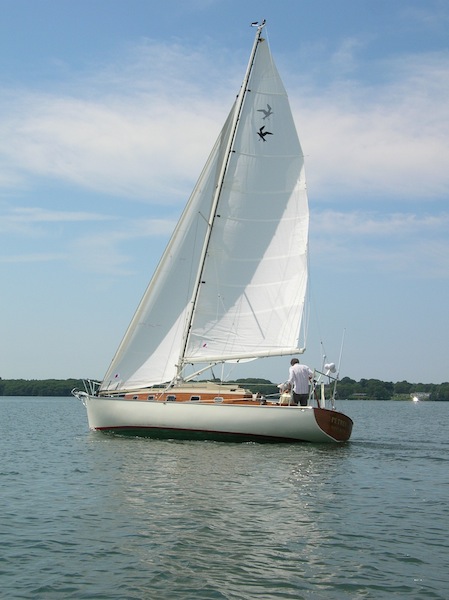 I should have mentioned earlier that the rig is not yet complete. She is supposed to be a yawl, with a little mizzen stepped behind the antenna arch on the stern.