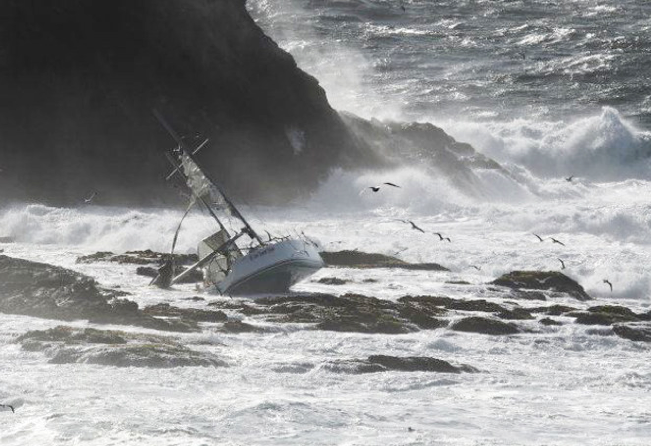 THE INDEPENDENT PANEL APPOINTED BY U.S. SAILING to study this year’s Farallones Race tragedy, in which five crew died after the Sydney 38 Low Speed Chase was capsized and driven aground by breaking waves while rounding the Farallon Islands off San Francisco, has released its final report. I urge you to spend some time examining it. The panel has done a very competent and thorough job and are to be commended for their efforts.

That said, I’m not sure I agree with their most important recommendation, or lack thereof. Having concluded, quite reasonably, that the cause of the accident was the crew’s failure to stay in deep enough water while rounding Southeast Farallon Island, the panel reasons in a rather cursory manner that a recommendation that the race committee set a course in deep water is not appropriate.

The relevant language, in its entirety, reads as follows:

The panel considered recommending placement of an offset mark or that the race committee set a course outside the 4-fathom shoal. However, we rejected these recommendations on two grounds: 1) it places an unacceptable burden of responsibility on the race committee to declare a specific distance off-shore safe when under certain circumstances a similar result could occur and 2) in any off-shore race, there are many similar shoal areas and points, which would have similar conditions and similar dangers. It is impossible to set rounding distances at every dangerous point. Sailors must be trained to the standards of seamanship to avoid such dangers. (See Appendix J.)

Decision-making regarding the course selection made by individual sailors participating in a race is an important aspect of the strategy central to the attraction of the sport. The panel believes that these decisions could be better balanced against potential risks if sailors were more aware of the likelihood of encountering breaking waves while traversing a shoal area. While there are no guarantees of absolute safety, risk levels can be greatly reduced by prudent seamanship.

A few illustrations from the referenced Appendix J give a good sense of the track of Low Speed Chase going around the island relative to those of other competing boats. 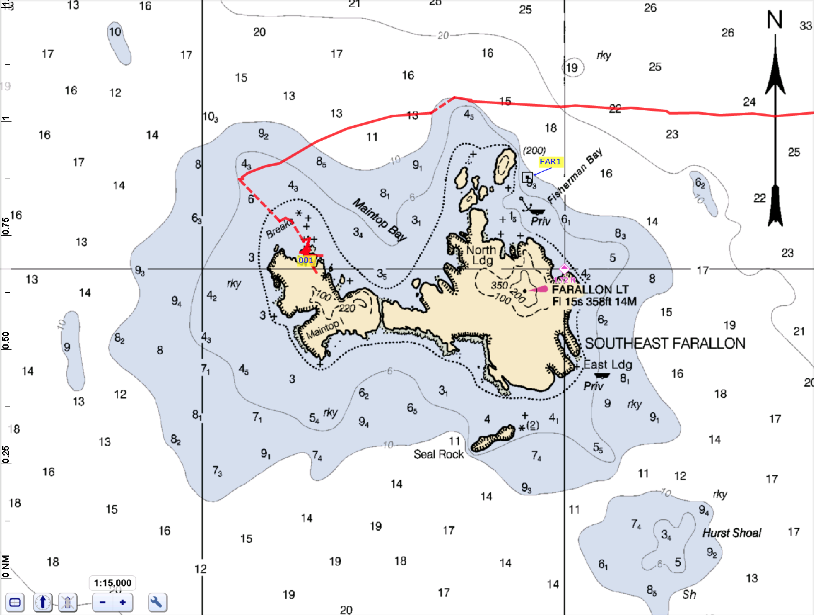 Track of Low Speed Chase in this year’s race 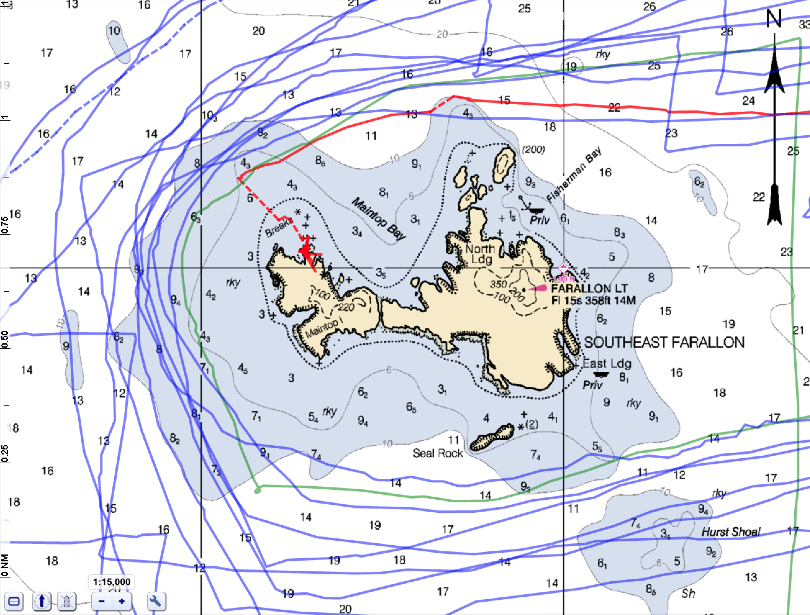 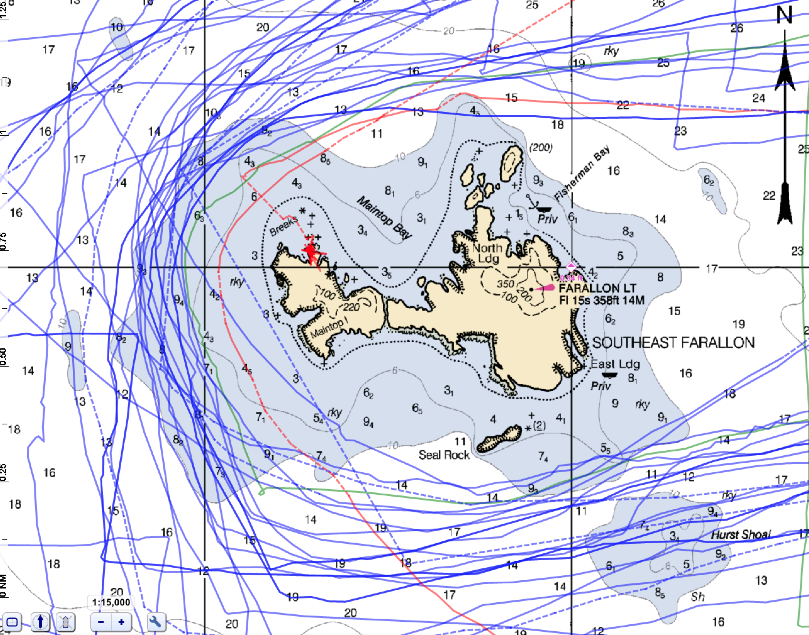 Tracks of various boats in Farallones races from 2009 to 2012, showing how most boats stayed outside the 6-fathom contour. Note the second red track, passing closest to the northwest corner of Maintop Island, which is Low Speed Chase‘s track in the 2011 race

What I find particularly perplexing is the panel’s statement that it would be an “unacceptable burden” for the race committee to determine a safe distance to stand off while rounding the island. First, the evidence seems clear as to what the common practice is (stay outside 6 fathoms). And second, the panel elsewhere in its report describes several accepted methods for calculating the depth of water in which waves are likely to break.

In reaching its hasty conclusion, the panel also fails to note that there are in fact other offshore races where race committees set course boundaries to protect participants from compromising their safety in the heat of competition. For example, waypoints for races through the Southern Ocean have been set to keep boats clear of ice. Or, as a much more modest example, competitors in the Downeast Challenge, from Marblehead, Massachusetts, to Rockland, Maine, are prohibited from using Muscle Ridge Channel, a rock-strewn shortcut, in their final approach to Rockland.

It seems to me the question of whether such a boundary is appropriate in Farallones racing is the single most critical and pertinent issue raised by the fate of Low Speed Chase. It is the one proscription that would certainly have prevented the accident, and there are good arguments to be made that such a proscription is entirely appropriate in a race like this.

Not that there aren’t good arguments to be made in favor of letting competitors set their own course and take their chances, as the panel urges. All I’m saying is the matter deserves a lot more discussion and analysis than the panel was willing to devote to it.

Next up, we should be getting a report soon on the Aegean tragedy in the Newport-Ensenada Race. A real mystery that one, and I look very forward to learning more about it.

(Photo up top by Sophie Webb)