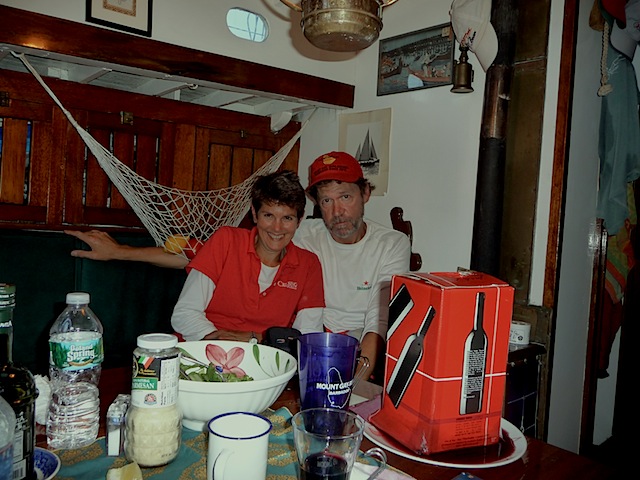 BACK IN THE LATE NINETIES when I quit my job as an associate editor at Cruising World, Elaine Lembo was hired to take my place. We’ve been good friends ever since. We usually have furtive encounters in vans running between BWI Airport and Annapolis in October and swap all kinds of juicy gossip about sailing magazines, particularly the ones we work for. This year for the first time we had our furtive encounter in the proper way, aboard a boat, in a fabulous anchorage in Maine (Ridley Cove, just south of Cundy’s Harbor), in company with Elaine’s partner-in-crime, paramour, and common-law husband, Cap’n Rick Martell.

I was aboard Lunacy; Rick and Elaine were aboard their vintage Crocker ketch, Land’s End. Can you guess which boat we decided to have dinner on?

We discussed the history of Land’s End at some length. She was built for brothers Henry and Alfred Lee Loomis in Lynn, Massachusetts, in 1935, who may or may not have some sort of family connection to the late great yachting journalist Alf Loomis. Elaine and Rick found her more-or-less derelict and have spent much of the past 15 years restoring her. 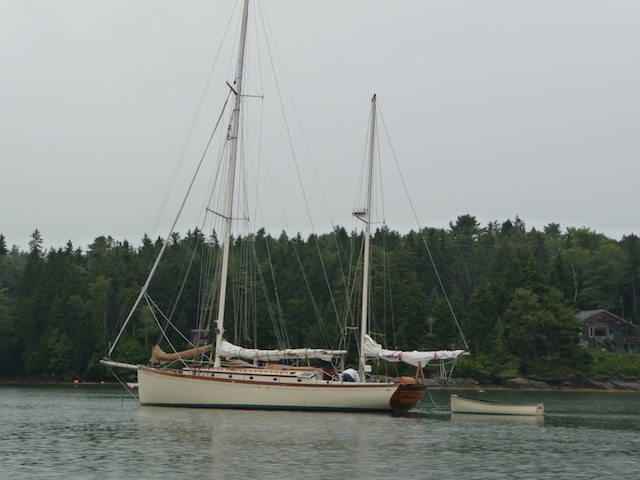 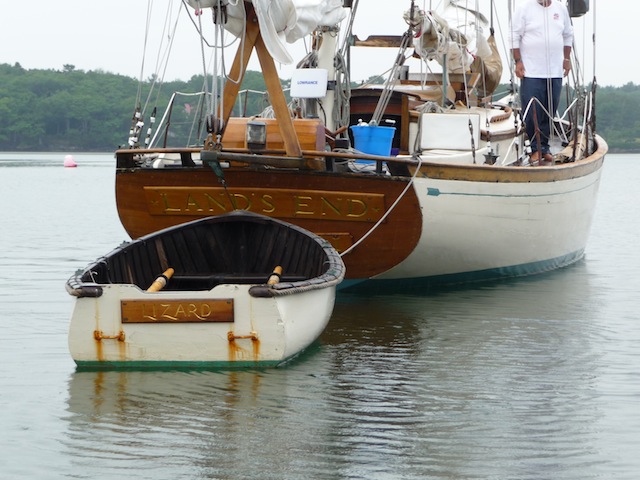 The dinghy, of course, is named Lizard 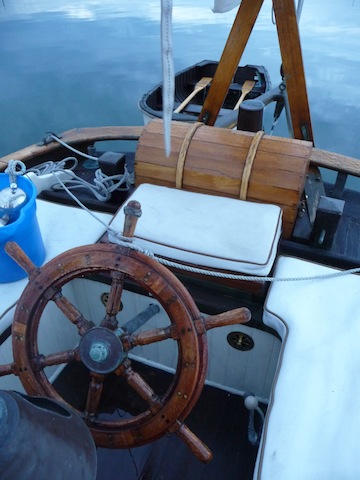 That looks like a rum cask behind the wheel, but really it’s a propane locker 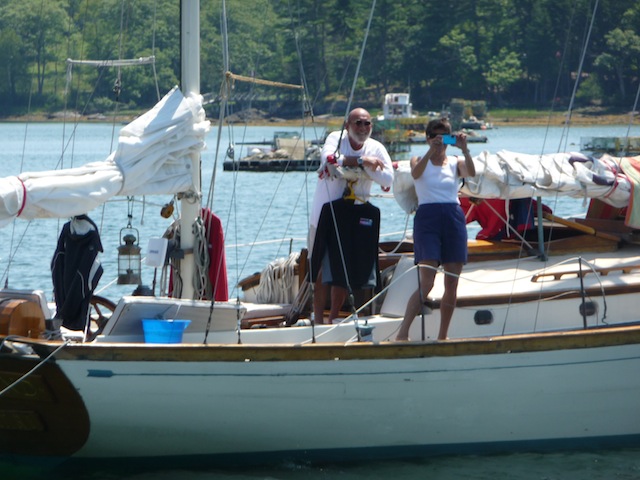 We also discussed the state of sailing journalism, particularly as it relates to our respective publications. Details of this conversation are, of course, highly confidential, but we can share certain important general conclusions we reached:

2) We are glad we don’t have the jobs of our immediate superiors.

Rick and Elaine have never cruised Maine before, and have never before taken Land’s End so far from her home in Rhode Island. For some reason, they are very intent on visiting the town of Friendship. I told them about the horrible reputation Friendship has on the midcoast, and they assured me they’d heard all about it. “Hateship” people call it, but they want to go anyway.

To drive the point home, I told them the story of a certain Wealthy Personage who had a fabulous custom trimaran built in Friendship some years ago. Came the day of the launching, and they hauled the tri out on a mudflat at low tide. The builder, new owner, and assembled guests then went off to have a celebratory lunch together while waiting for the flood tide to float the boat.

When they came back at the appointed hour they found the tide was up, but the boat wasn’t floating, because someone had gone out with a hand drill and drilled 50 holes in the hull.

True story. I had it from the Wealthy Personage himself. He was so pissed he sat down and whittled 50 pine plugs then and there, stuffed them in the holes, pumped out the boat, and took her away, swearing he’d never again return to Friendship.

Elaine and Rick were appropriately horrified, but are confident their boat will not receive the same treatment.

PS: The tri is currently for sale, in case you’re interested.