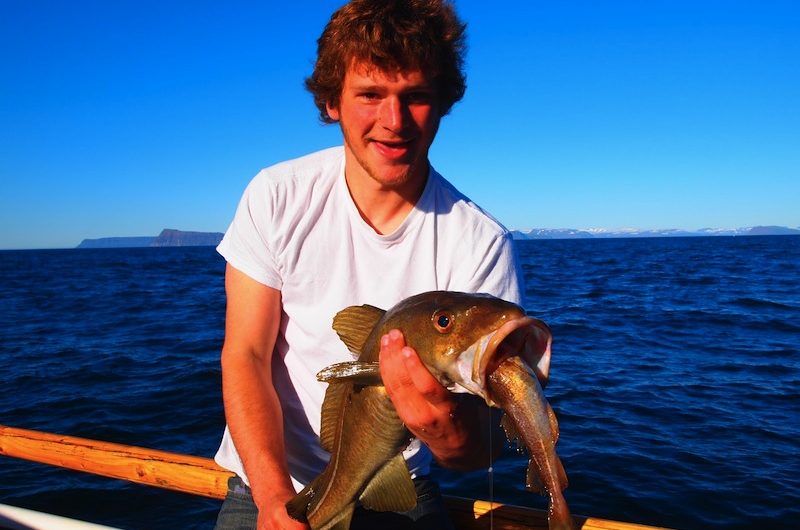 JUST IN CASE you guys haven’t been following my cousin Nick’s cruise to the east coast Greenland like I told you to, I thought I’d import an entry from the ship’s blog so you can get a taste of how things are going aboard S/V Teddy. Nick, unfortunately, came down with the shingles, but is recovering; meanwhile, he and the crew have had little trouble catching cod to eat. The text that follows is by Nick; the fantastic pix, evidently, are by Ben Yeager.

Took 4.5 days to cross the Denmark Strait to Greenland. Little or no wind for the middle half – a damn lot of motoring.

We entered the ice field 3x. By ice field I mean vast regions of concentrated floes & bergs. The Danes (the colonizers of Greenland) call this the stori, the until recently impenetrable ice fields coming down from the polar basin year round. This pattern dramatically changed in the past decade, due to global warming I guess, and small boats like mine can enter a month or two a year. Two locals told me that 5 sailboats come in each year, in August.

Sailing through the ice fields is a totally new experience. Luminous blue & while floes all around as far as one can see. Seals basking on floes or in the sea, a hurtful expression on their faces. Whales rising to the surface. Ice-fog misting the whole, then suddenly rising to show the horizons white with the ice field.  The occasional colossal berg amid the flat floes. 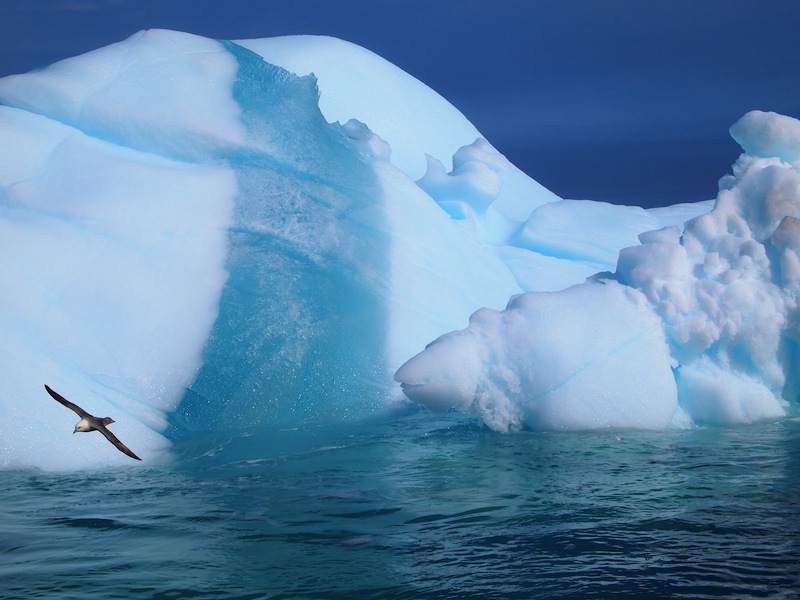 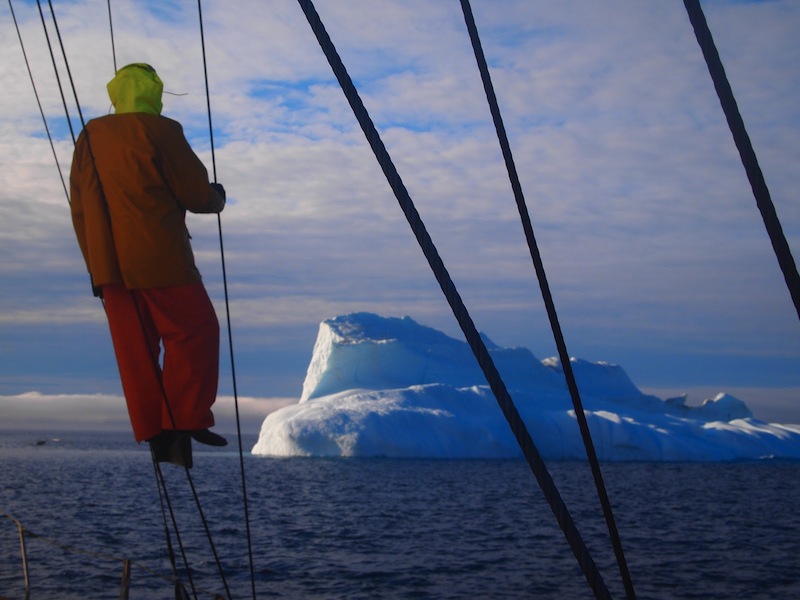 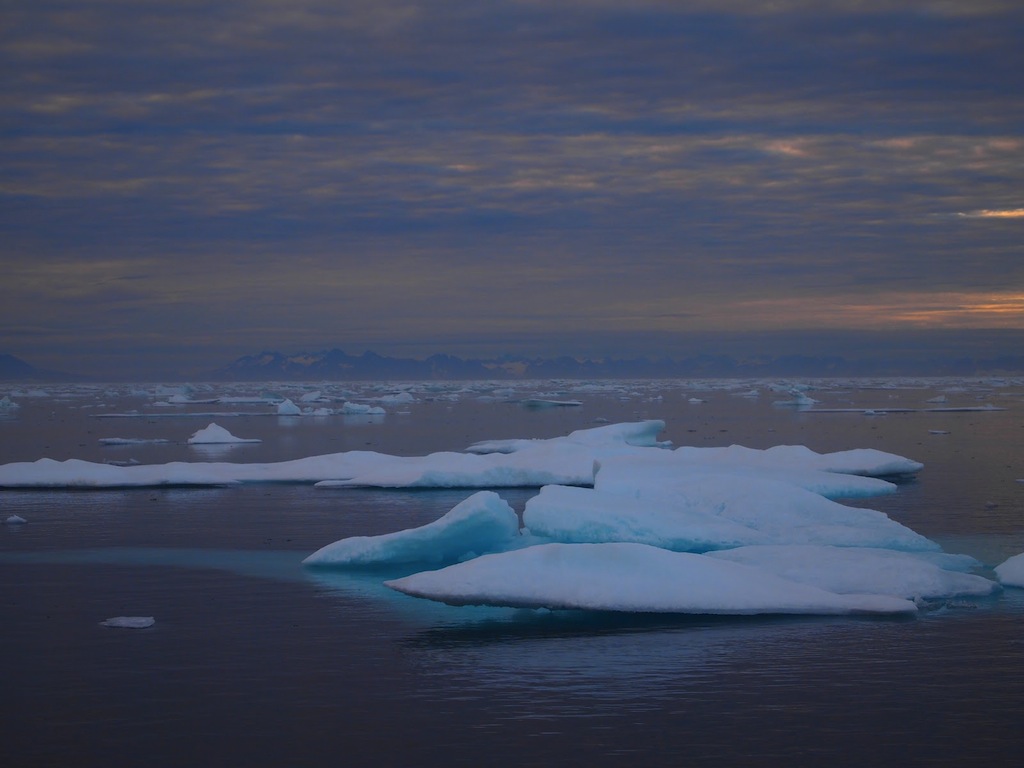 At all times the barometer was steady, the sky settled, the wind calm to breezes.

Sailing through the floes is like no other experience in sailing. For me. Total utter concentration, seeking out passages ahead, where to go, where not, passing floes with feet or inches to spare, or knocking off floe edges when I had to squeeze between two. Running over small stuff. A constant vigilance, like downhill slaloming, or racing over boulders. I felt very comfortable with doing this, totally enjoyed it & had total confidence.

The first time we entered the floes for fun, took half a day to get out. The second time we entered, found it thickening too much, bore off towards lesser concentrations & to the edge of the ice field, followed the edge for a long time, then reentered a third time & passed clear through to black waters 30 miles off Greenland & clear all the way in. Probably 50 miles in all sailing through the ice fields. 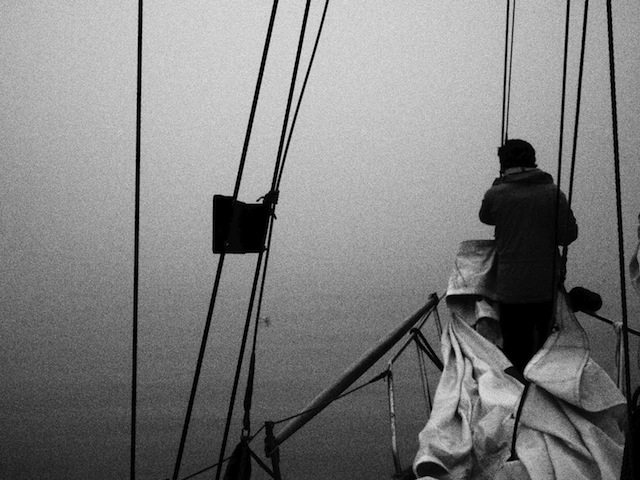 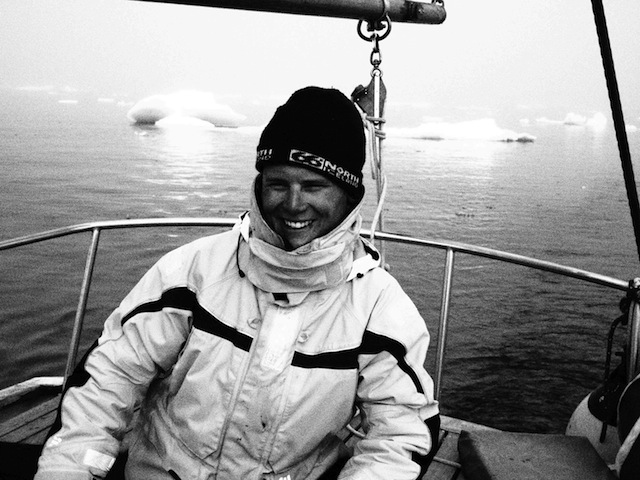 What a great way to sail.

Very dangerous, yes. The barometer & the steady conditions, the knowledge of where the ice field ended (behind me or to one side), and the very strong steel hull of Teddy, made me OK with doing  this. I look forward to discussing the dangers of these conditions with experienced sailors.

We sighted Greenland far far away, when the ice-fog suddenly lifted. A shocking view, an immense & far-off sharks mouth of raggedy teeth, up & down the the whole coast & receding far far inland in fading ranks. These mountains steeper & far more jagged than sharks teeth. Rising to 4000-6000 ft. A powerful moment that the 3 of us had long sought. This was my 3rd attempt to sail to Greenland. 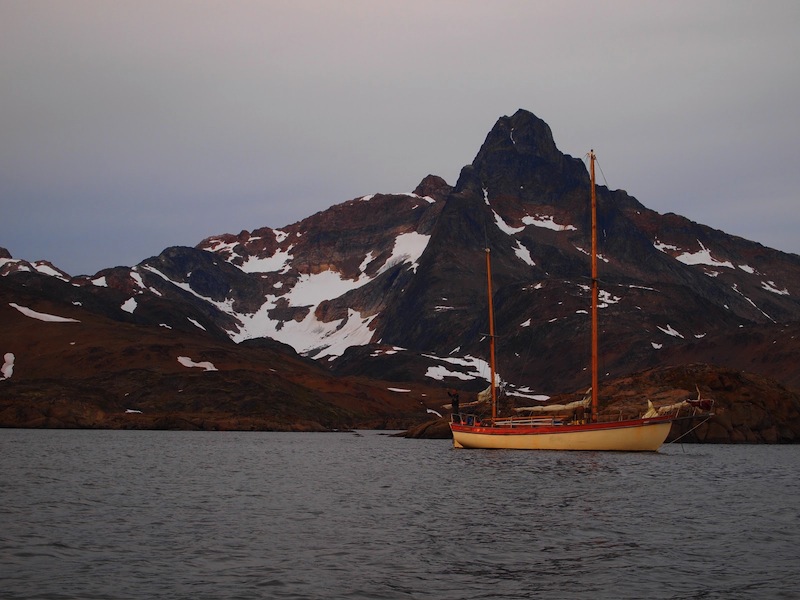 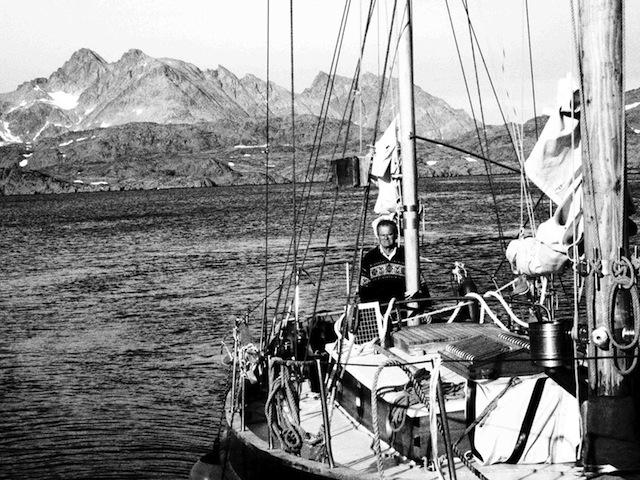 This is written at Ammassalik, now known as Tasiilaq. Near the airport of Kulusuk which connects w/here by helo.

1500 Eskimos here. I mean Inuit, is that more correct politically? I love looking at  their faces & shapes. Talked with a few, not too many speak English – they tend to be bilingual in Inuit & Danish. There is a calmness, a sparseness of ego, a deep sense of respectful boundaries between people. This compared to the Americans & Irish I have known. 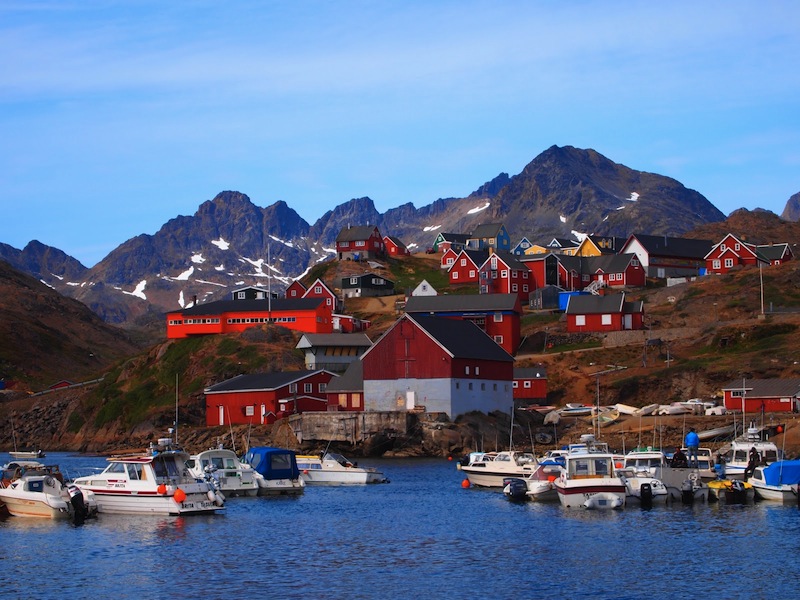 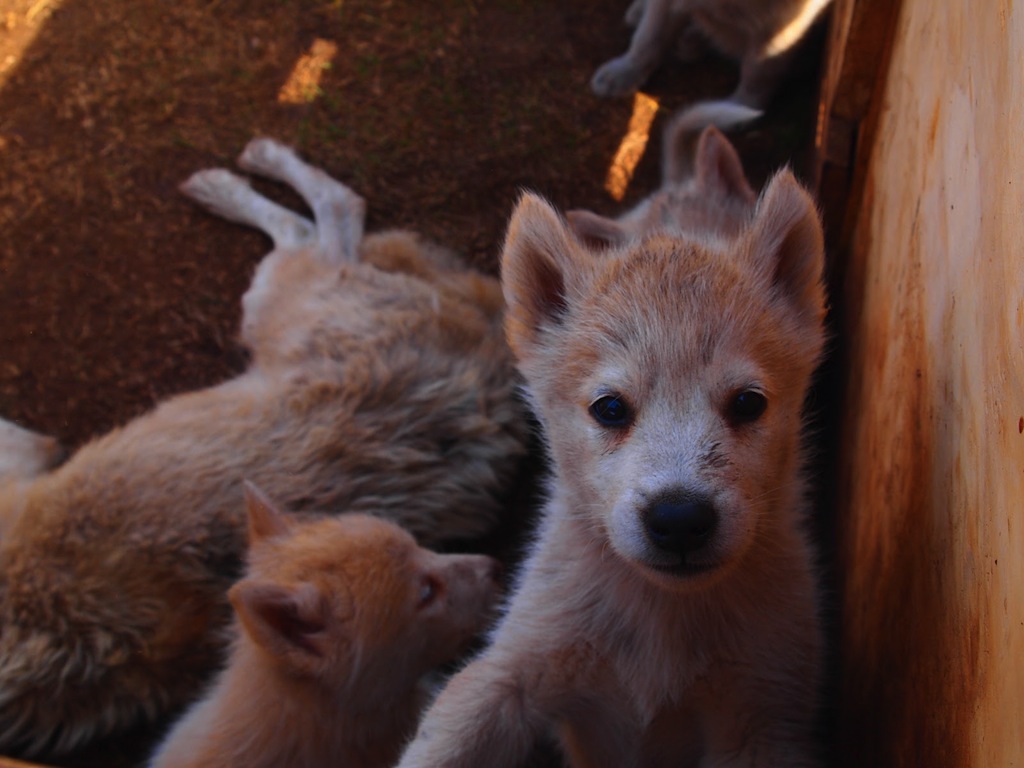 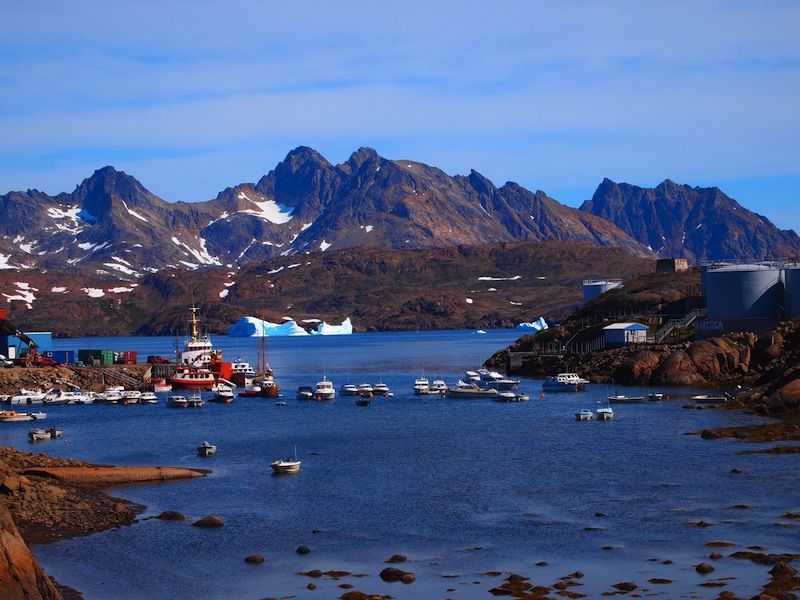 Have swum in the sea & in meltwater streams, delicious.