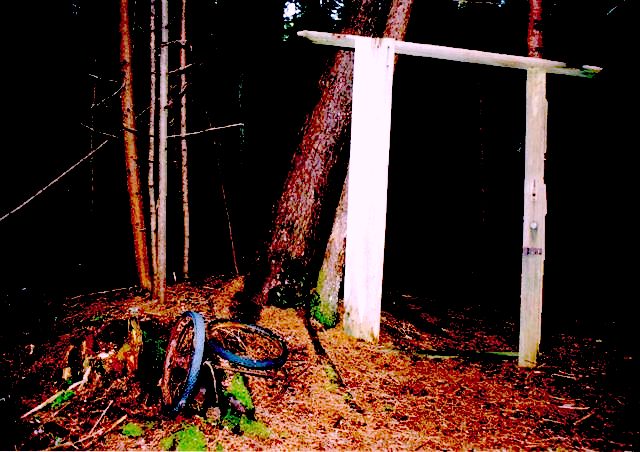 On returning from a solo cruise to Mt. Desert Island in Maine some years ago, I stopped and anchored for the evening next to an uninhabited islet off the northwest corner of Swans Island.

At least I thought it was uninhabited…

The sun was already low in the western sky, but I thought perhaps there was just enough daylight left for an expedition ashore. The tiny island beckoned to me. I hurried through my chores–rigged a snubber line on the anchor rode, snugged the sails down for the night–and then jumped in my tender and pulled for a thin stone strand I could see at the foot of a low cliff that ringed the island’s shore.

Facing the anchorage there was a shallow ravine that cut through the cliff, up which I scrambled once I shipped my oars and secured the tender. At the top of the ravine I found a well-worn trail leading inland. And just a few yards down that trail I found a doorway standing alone at the edge of the forest that stretched across the middle of the island.

Doesn’t the child in all of us yearn for such an invitation? I had waited my entire life for a moment like this. Like Alice poised on the rim of her rabbit hole, I stood a moment, then stepped very deliberately through the door into what I hoped was a new dimension.

As soon as I passed through the door I heard voices. Angry, chattering voices. And a few yards further on, directly beside the trail, I found a squirrel sitting on a log. I sensed instantly it was not a normal squirrel. When it saw me, it did not flee, but instead started screaming at me like a spoiled child. I tried to frighten it, waved my arms and shouted at it, but the squirrel held its ground. I threw a stick at it, and the squirrel jumped into a nearby tree, where it crouched on a branch and continued shrieking at me. On examining the log where the squirrel had been sitting, I found a strange pile of shredded fungus. 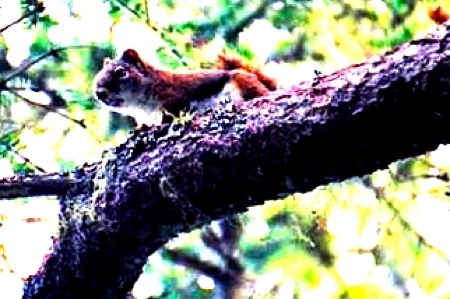 I continued down the trail and discovered some amazing things. Elaborate constructions of forest detritus and abandoned junk. 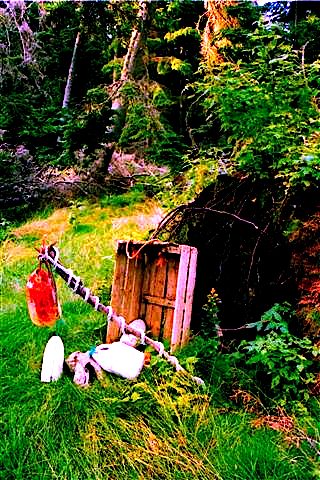 Curtains of lobster buoys hanging in a tree. An empty tin throne erected upon a dais of rock. A ladder to nowhere. 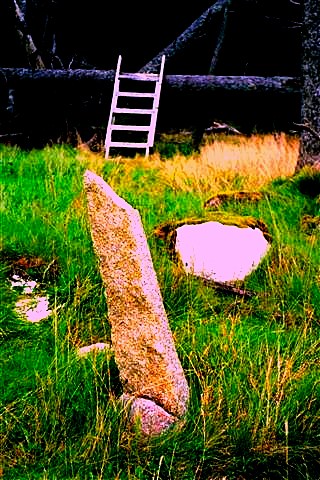 And all the while, as I marveled at these things, there were squirrels crouched on tree branches around me, chattering in protest.

In the end, after I hiked the whole trail, which led in a circle around the island back to the stone beach where I had landed, I found some mushrooms in the grass with bites taken out of them. Looking around, I noticed there were partially eaten mushrooms everywhere. Finally, it dawned on me: all the squirrels on this island had been eating these mushrooms. 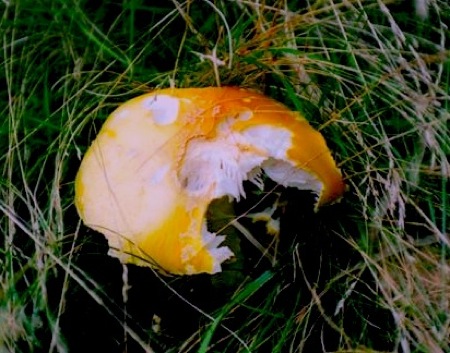 I’d like to report that, like a good little Alice, I immediately sampled a mushroom, had visions that laid bare the inner workings of the cosmos, and so, like the squirrels, became proficient at installation art.

But no… instead I rowed quietly back to the boat while admiring the pine-studded silhouette of the island and the blossoming stars in the twilit sky that framed it. And as I rowed I thought, not for the first time, that the best moments when cruising are made of small adventures like these.