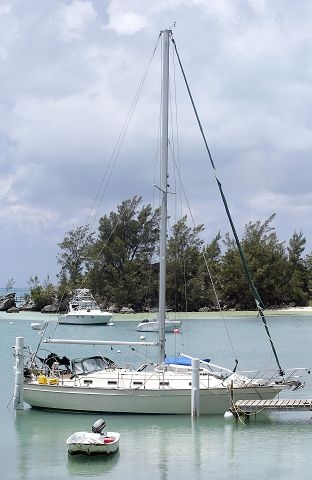 HERE’S A POSTSCRIPT to a sad story. Triple Stars, the Island Packet 380 from which cruiser Jan Anderson was lost overboard last November, was towed into Bermuda last week by a fisherman. The boat has been adrift ever since Jan’s husband Rob abandoned it about 285 miles northwest of Bermuda, after a search for Jan was called off. As you can see in the photo up top, taken at Ely’s Harbour in Bermuda last Thursday (by Glenn Tucker, for the Bermuda Royal Gazette), the boat looks to be in reasonably good condition. At the time she was abandoned, there were reportedly problems with her autopilot and in-mast furling mainsail, but she was otherwise operable.

Triple Stars was last seen on March 14 when the cruise ship Prisendam spotted her adrift. She was spotted again by a Bermudian charter-boat skipper, Peter Rans, off Bermuda last Wednesday, and was towed to shore by Andrew Card, a commercial fisherman. 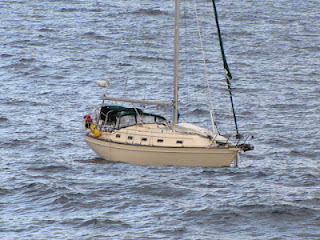 Triple Stars, as seen from the deck of Prisendam in March

The Andersons were participating in last year’s NARC Rally and were 10 days out of Newport en route to Bermuda when the accident that cost Jan her life took place. As was reported here on WaveTrain, rally organizer Hank Schmitt, prior to the accident, criticized volunteer weather-router Herb Hilgenberg for advising the Andersons to stay well north of the island, in spite of having a following wind, so as to avoid strong weather. Subsequently, I published a post discussing the question of whether Herb’s advice is overly conservative (an opinion shared by many skippers I know). Ever since then, Herb’s fans have been attacking Hank and me in online forums, especially since Herb has suggested he may retire because of what was published here.

You can read a representative exchange (the only one to which I’ve bothered to respond) here.

For the record: as of this moment Herb has announced on his website that he won’t be routing boats for much of August and may not operate during parts of September and October. I should also note (again) that Herb had been making noises about finally retiring long before last fall.