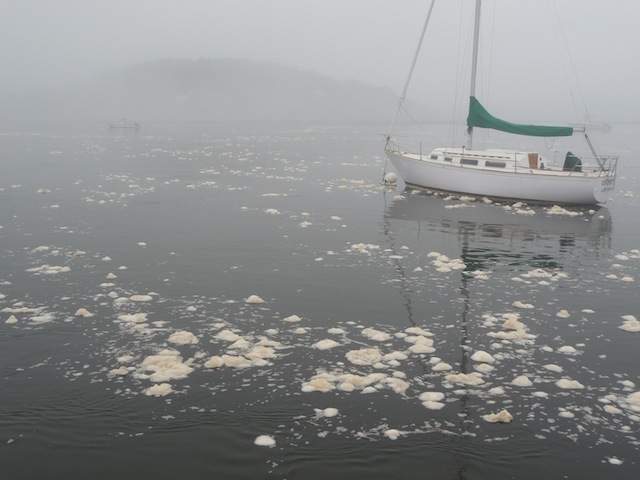 CLARE, LUCY, AND I (sans Una, who was off jet-setting in SoCal) packed ourselves aboard Lunacy this past Wednesday and were off from Portland none too early, heading east across the whole of Casco Bay, bound for Popham Beach and the mouth of the Kennebec River. I was afraid our late start would leave us in the end struggling against the full might of the outgoing tide as we entered the river mouth… and so it was. What I hadn’t counted on was having to do this in zero visibility.

Crossing Casco we had fair visibility, two miles or more, with intermittent bursts of sunshine, but as soon as we turned the corner at Small Point the previously disparate fog molecules closed up in very tight formation. As well as I know the river mouth, it is arguably the most treacherous on the Maine coast, and I would never have attempted coming in in heavy fog on anything other than a slack tide, but for the modern miracle of the electronic chartplotter. Even with the assurance of knowing exactly where we were at all times, it was a nerve-wracking experience. With the autopilot steering, our course over ground varied madly by 20 degrees or more from moment to moment as the current yanked our bow first one way then the other, and it took a great deal of concentration to keep the average course true. 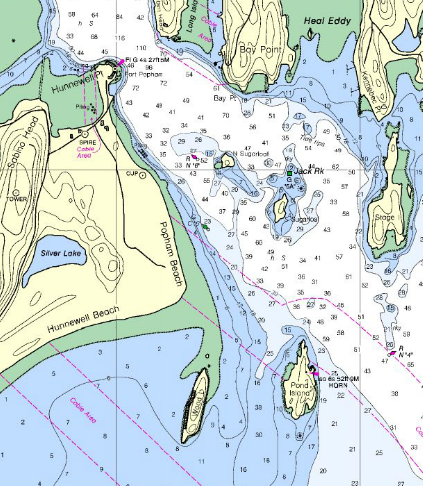 The most nerve-wracking bit was the conclusion, after we crawled through the river entrance and had to turn across the full force of the current toward where I thought the moorings behind Fort Popham must be located. I was pretty sure my memory was accurate, but still was greatly relieved when a familiar silhouette finally emerged in the gloom ahead of us. Osprey, a Sabre 28, has been lying on the same mooring at Popham every summer since I was in high school. When I was young, and she was new, I admired her intently, but never have I been so glad to see her. As you can see in the photo up top (taken after we picked up the empty mooring next to her, and after the fog had thinned quite a bit), she has been well maintained. All the sea foam in the water around her should also give an idea of hard the Kennebec runs at maximum ebb tide.

We entered the river under power, of course, but previously, while crossing the bay, we did get to do some sailing for brief bits when the wind filled in. To make the most of it, I tried flying the staysail with the big new screecher, which worked rather well. 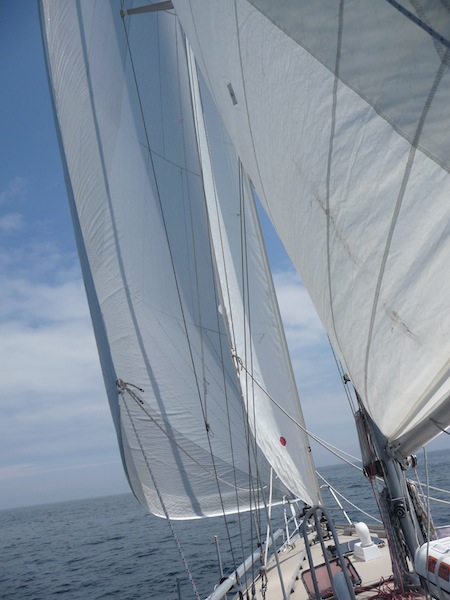 This was also my first chance to use the new Selden reversible winch, which was something of a disappointment. In light to moderate conditions, handling the mainsheet, which runs off the boom through a four-part tackle, the winch would not consistently ease the line in rewind mode. It may be that between the tackle and the light wind there simply wasn’t enough load on the sheet to pull line off the drum. Or the problem might be that the handle is not working quite right. When I inspected it, I found the little pin inside the stud (which actuates reverse gear on the winch when you depress the button at the top of the handle) was a bit sticky. 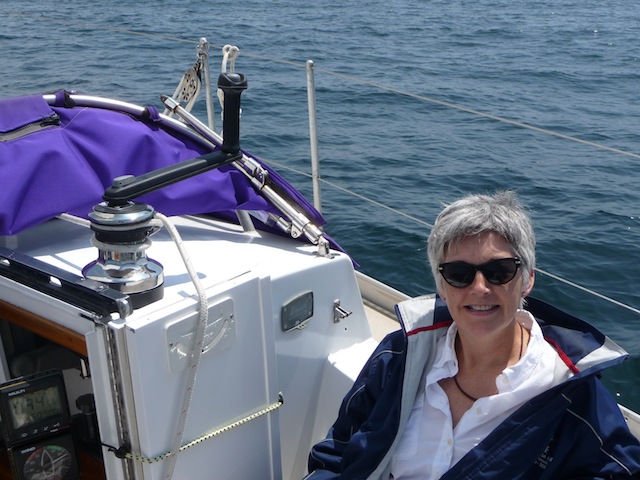 In any event, the winch (seen here posing with Clare) worked just fine as a regular winch, and I had no trouble easing the mainsheet the old-fashioned way. 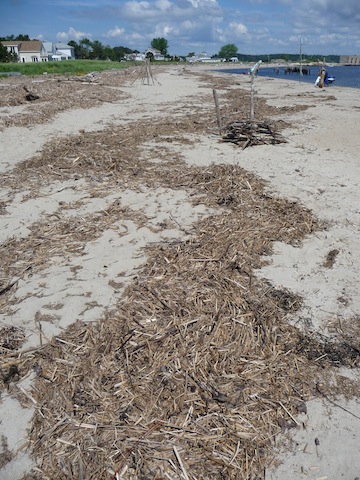 Another thing we noticed: there is an awful lot of debris and driftwood in the water this year. (I noticed this, too, while sailing across the Gulf of Maine with Brian Harris on Amhas late last month.) You can see here the vast slew of schmutz and debris we found while walking on the beach at Popham.

The following day, Thursday, we took a spin up the river to Bath aboard my buddy Kurt’s sexy bow-rider runabout Sea Squirrel: 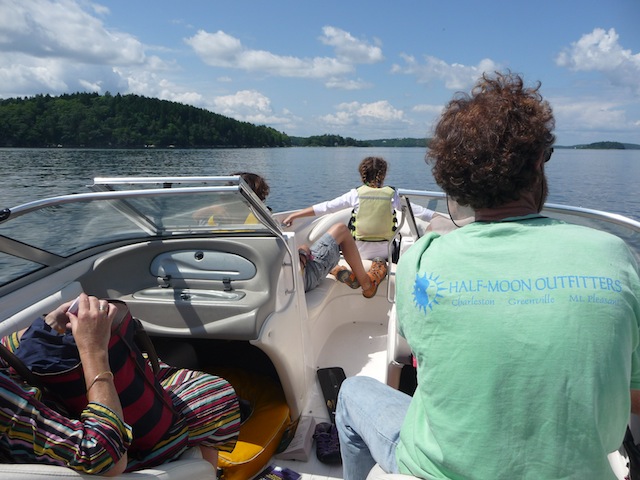 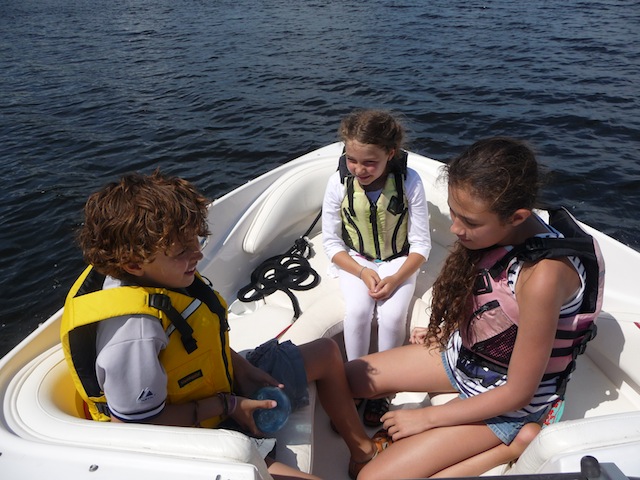 A gaggle of kids in the bow. From left to right: Jack, Lucy, Sophie 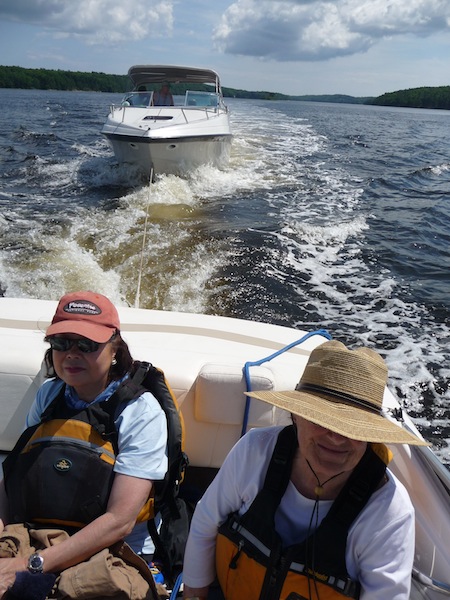 A pair of wise grandparents, followed by the folks with engine trouble we towed upriver 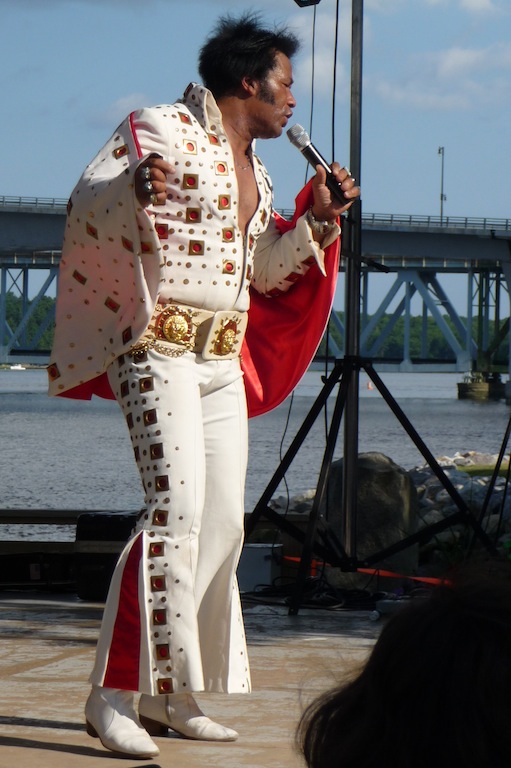 Our reward: a black Elvis impersonator performing on the waterfront in Bath!

On Friday we sailed Lunacy around Small Point to Sebasco, and Kurt and his chilluns came along for the ride. 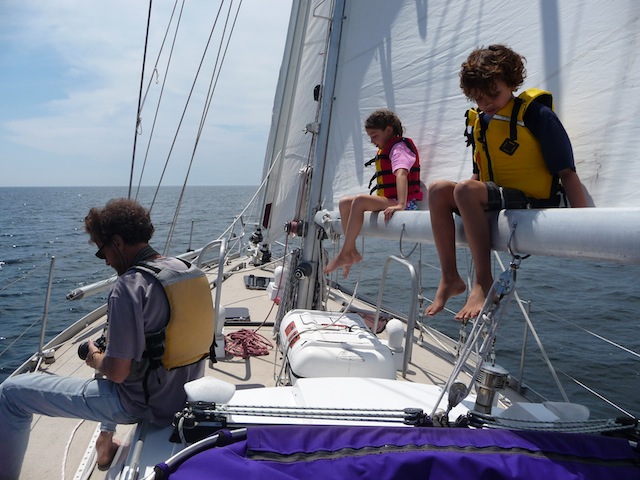 From left to right: Kurt, Lucy, and Jack on deck 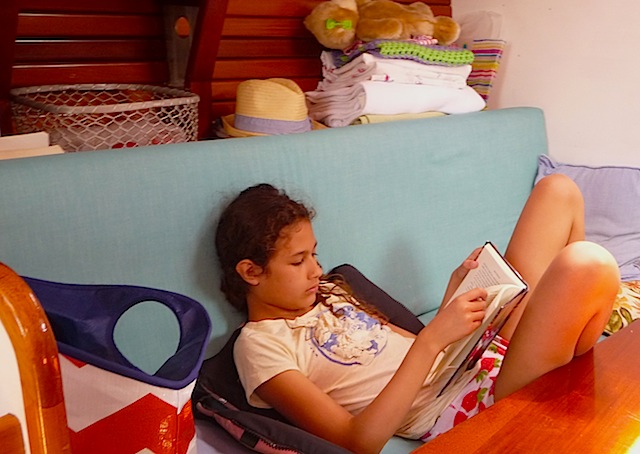 Meanwhile, down below, Sophie enjoyed a book 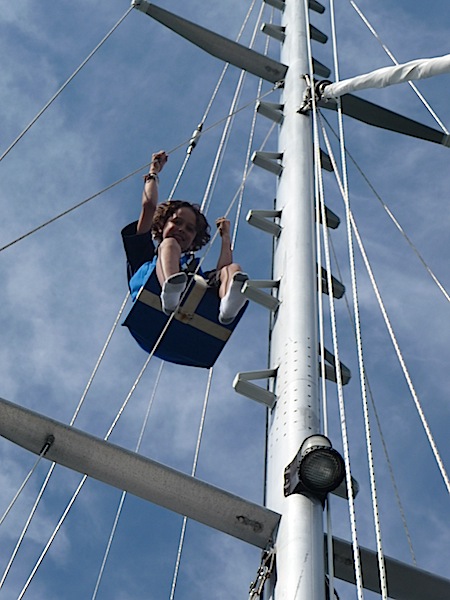 After we reached Sebasco, I amused myself hauling children up the mast in the bosun’s chair. This is Jack, who went all the way to the top… 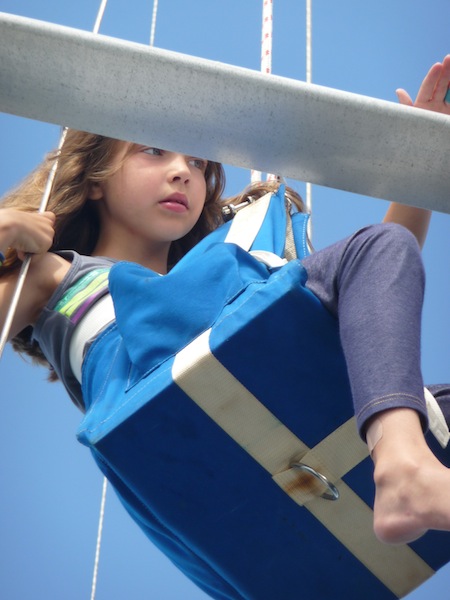 And this is Lucy, who went a ways past the first set of spreaders.

On Saturday we sailed sans Kurt & Co. from Sebasco back across Casco Bay to Great Chebeague Island, where we anchored off one of our new favorite destinations, the Chebeague Island Inn. (Yes, we had a fine dinner, and Lucy made friends with a gaggle of girls who were staying there.) 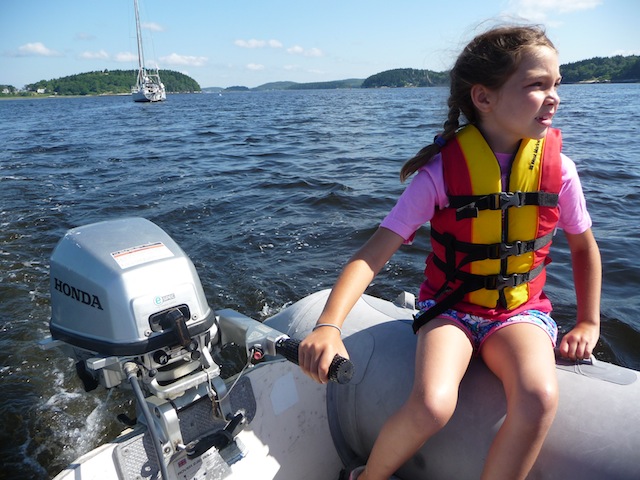 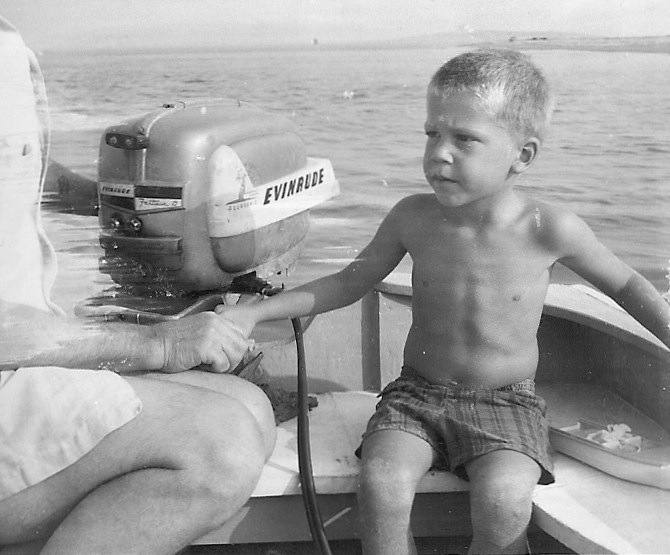 Thus following in the wake of her dad, who first learned boats in a similar manner on the Kennebec many many years ago.