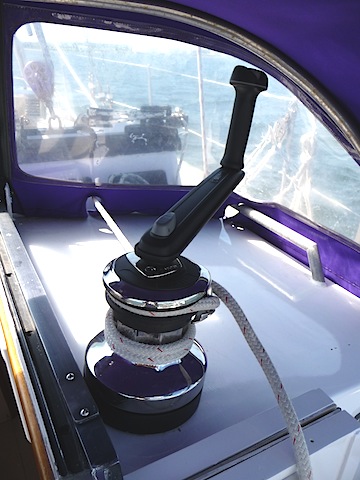 EVER SINCE THEY WERE INTRODUCED in Europe almost two years ago, Scott Alexander at Selden Mast has been urging me to install a Selden reversible winch on Lunacy. Only problem was he couldn’t get me a winch. Well… they finally started shipping these puppies across the Pond this past spring, and now at long last Scott has sold me one. I spent the morning yesterday installing it, a process that was only a little bit more involved than I hoped it would be.

Although Scott had suggested I replace ALL the winches on the boat with Selden winches (he is a salesman, after all), I opted just to replace the mainsheet winch, which sits on the coachroof beside the companionway. The mainsheet, of course, is a line that gets played a lot–trim, ease, trim, ease, ad infinitum–so a reversible winch (you can ease it without taking the line off the winch) should come in very handy here.

Job one was removing the old Enkes winch. On taking out the little overhead panel inside the cabin under the winch, I instantly discovered a complicating factor. There is a vertical T-frame (remember, the boat is aluminum) running directly under the area where the winch is mounted. This restricted access to the nuts on the mounting bolts under the winch, and it took a little creative fiddling with wrenches and vice grips to get them all off. 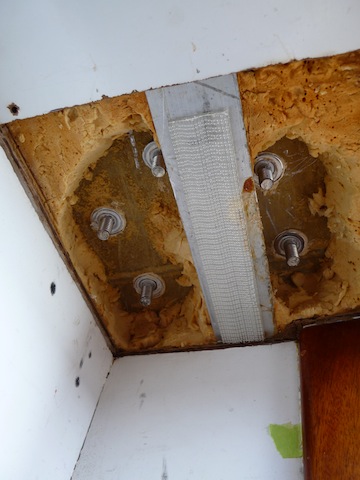 Old winch bolts with T-frame running down the middle. The nuts closest to the frame were hard to get off

Having removed the nuts, I next had to break the grip of the adhesive sealant that had been used to bed the bolts. After removing the winch drum so I could better see what I was doing, I took a thin butter knife from the galley and used it as a wedge, driving it under the winch base with a hammer. Eventually, I managed to cut through enough of the sealant around the bolts that I was able to pull the winch free. 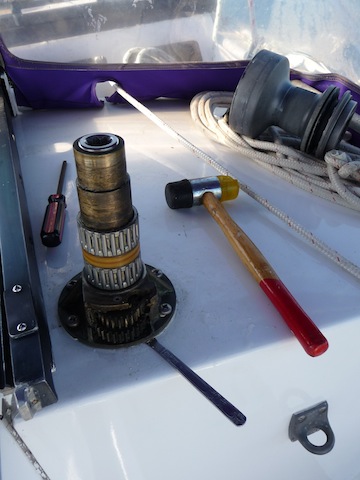 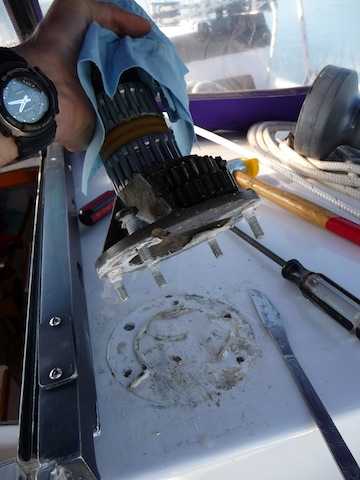 After cleaning away all the old sealant (I used lamp oil as a solvent), I took the mounting template for the new winch and started playing with positioning possibilities. Here I encountered another complicating factor. The old winch could be oriented in any direction, because its self-tailing arm is completely adjustable and can set anywhere on the winch’s circumference. This had made it possible to position the winch so that all five of its mounting bolts landed either side of the frame under the winch.

But the new winch ideally can be oriented more or less in only one direction, because its self-tailing arm is fixed in place and needs to be in a certain position relative to the line running on to the winch drum for optimal hands-off line-easing action. The third complicating factor, of course, was that I wanted to use as many of the old mounting holes as possible.

In the end, I found it was not possible to position the new winch anywhere near its optimal orientation relative to the mainsheet while having all five mounting bolts land clear of the frame underneath. The best I could manage was getting four bolts in and using one old bolt hole. 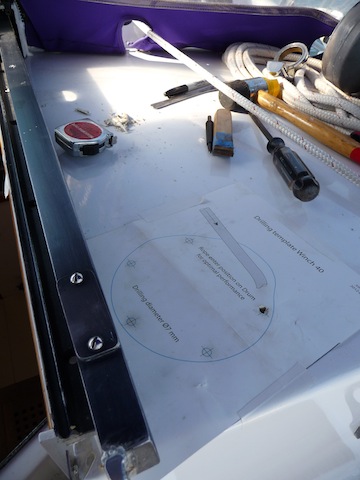 After I finally deduced all this, I taped the template in place and drilled three new holes in the coachroof. I then dry fit the new winch. (Note: one nice feature of these Selden winches is that you can snap the mounting bolts into the base without taking the winch apart.) 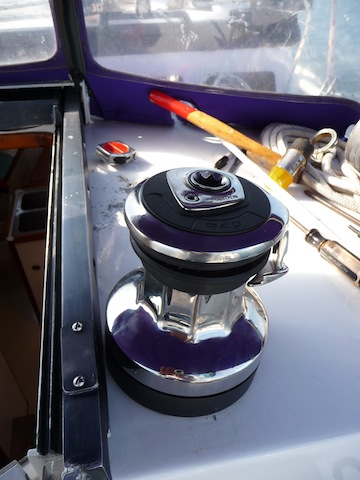 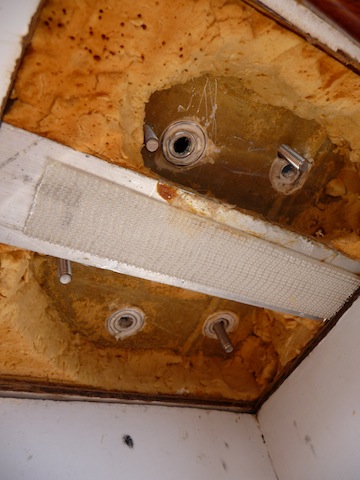 For the final installation, I first taped over the four old holes I couldn’t use again and filled them with sealant. I then cut out a thin sheet of plastic to insert under the winch so as to completely insulate it from the aluminum coachroof underneath it. Besides bedding the bolt holes with a bit of (non-adhesive) sealant, I also installed plastic instead of steel washers under the winch so as to insulate the nuts. 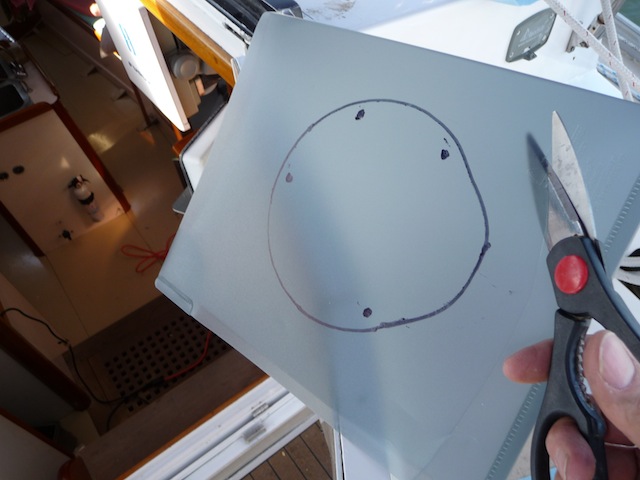 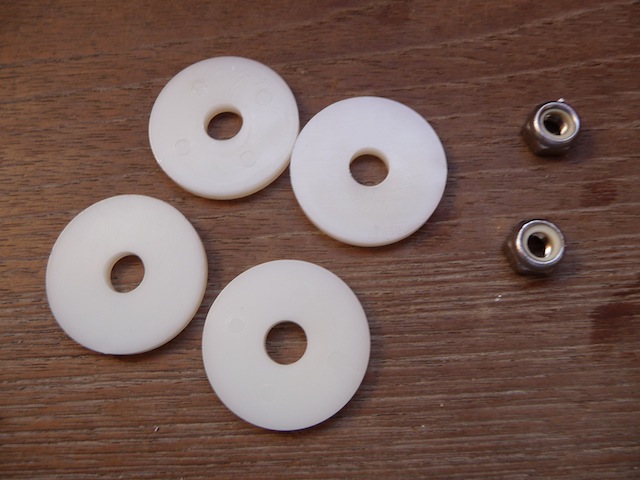 This is the game when working on an aluminum boat. You needn’t worry so much about spreading loads when mounting hardware, like you do on a fiberglass boat, but you do need to keep the hardware from touching the boat, which, as they say, is a pain in the ass of a different color.

You see the final result in the photo at the top of the post. Unfortunately, I didn’t have time to go for a sail yesterday to try the new winch out. But I did raise the mainsail on the mooring and played with it a bit to see how it worked.

The positioning is perfect. It’s easy to load the line into the self-tailing arm (it captures the line both leading into and out of the self-tailing jaw), and the reversing mechanism performs flawlessly. To trim a line you grind clockwise for high gear, counter-clockwise for low gear (as on any two-speed winch); to ease the line you press a button with your thumb on the winch handle, cock the handle slightly counter-clockwise to engage reverse, then grind clockwise to feed line off the drum.

Can’t wait to try it out for real. This summer for sure I’m going to a real main-trimming monster.