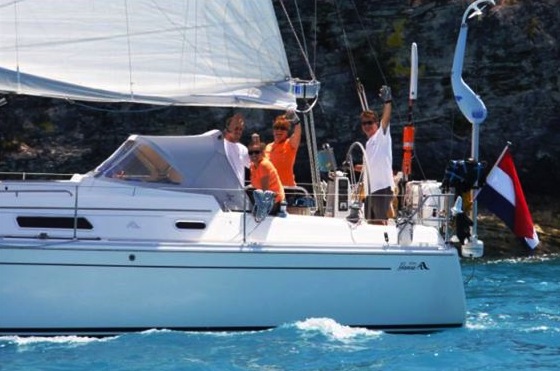 I’VE BEEN MEANING TO SHARE more about my time in Bermuda visiting the ARC Europe fleet, but I hadn’t thought I’d end up having to write a post like this. You may have heard the news over the weekend: one of the 33 boats that departed St. Georges for the Azores last Wednesday was abandoned on Saturday after striking a submerged object believed to be a whale. Fortunately, no one was lost or injured. The boat, a Hanse 370 called Outer Limits (pictured up top slipping out Town Cut on Wednesday), belonged to an amiable Dutchman, Joost Gehrels, who I happened to interview the evening before his departure.

I was interested in Joost primarily because he was the only European in the fleet who had cruised the U.S. during his time on this side of the Pond. (The others, of course, spent all their time in the W’Indies.) He also seemed to have the most interesting crew, which he’d put together at a website called findacrew.net.

Joost bought his boat new in 2007 and in 2008, after selling his interest in a retail phone business in Holland, sailed to the Caribbean from Europe with the ARC. He spent three seasons there, then sailed up to North Carolina last summer and started a cruise with his Canadian girlfriend that took him as far north as Boston. Highlights included spending July 4th in New York Harbor (“The most beautiful fireworks I’ve seen in my life!”); attending his first baseball game in Boston at Fenway Park (Red Sox v. Yankees, and the Sox won in the bottom of the 10th); and weathering the fall-out from Hurricane Irene on Chesapeake Bay.

Joost stored his boat in Maryland over the winter, then returned from Holland this spring to prep for his transatlantic back to Europe. His lively pick-up crew consisted of an Italian woman, Marta Cappiello, who had previous transat experience; an American woman, Diane Ferrero, who also had a lot of sailing experience; and a young American man, Andrew Siess, who had no sailing experience, but lots of adventuring experience, including stuff like bicycling solo to Patagonia.

Joost and Co. had a bumpy, but successful ride out from Hampton, Virginia (only a handful of ARC Europe boats started from there; most left instead from the BVI), and quickly made a favorable impression on the whole of the ARC Europe fleet once they reached Bermuda. Unfortunately, they were just two days out of St. Georges when the proverbial sh*t (their boat) hit the metaphorical fan (a whale). 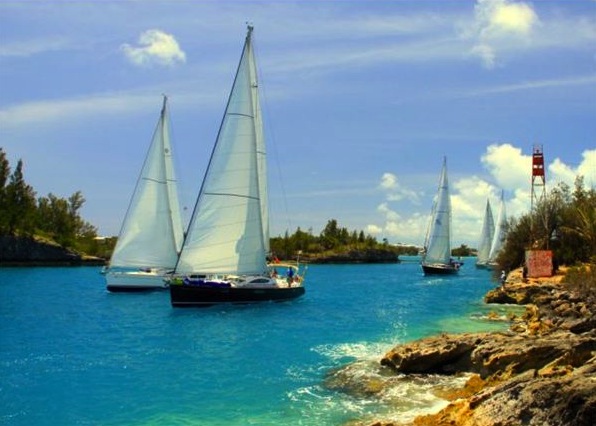 This is the account Rally Control sent via e-mail to the rest of the fleet:

RCC Bermuda Radio at around 1030UTC on 18 May contacted Rally Control in the UK to advise that a mayday call had recently been placed by one of our rally yachts Outer Limits in approx position 34.021.1N 058.055.4W

They had struck a whale and were taking on water from the bow and required immediate assistance. Outer Limits were also able to speak with Bermuda Radio from their sat phone to pass further details.

At approx 0010UTC on 19 May the merchant vessel had reached the latest position for Outer Limits and all 4 of the crew were safely transfered onboard. Yacht Halo at this time was then asked to stand down.

The yacht Outer Limits is now abandoned but taking on water and Bermuda Radio will be issuing navigational warnings to that effect.

At approx 0120 UTC rally control was able to speak with the skipper of Outer Limits, Joost Gehrels, via the merchant ships phone and he and all his crew, Marta Cappiello, Diane Ferrero and Andrew Siess, are safe and well although understandably shaken. They have been able to contact their friends and family ashore and inform them that they are OK. The are now currently bound for the ships original destination of Cagliari, Italy with an ETA of 28 May. 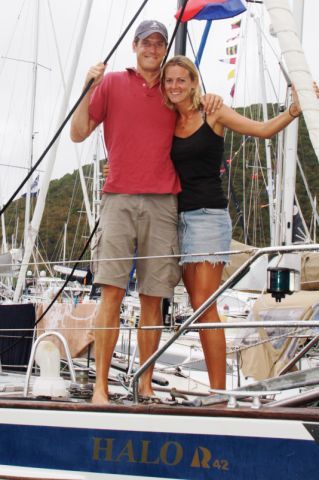 Mike and Alexandra Bayley, doublehanded crew aboard Halo, a Hallberg Rassy 42, who responded to the Mayday call from Outer Limits

The one significant particular that the rally organizer, World Cruising Club, added to this in their public press release was:

Whilst the yacht’s emergency pumps were able to contain the leaks, skipper Joost Gehrels doubted that the boat could safety return to Bermuda and issued a MayDay to request immediate assistance.

As always, it is impossible to develop an informed opinion about incidents like these without having been on the scene. But I do wonder if Joost might possibly have saved his boat, given that last sentence.

The inimitable Don Street, who is never shy about sharing his opinions, sent around the following e-mail on this incident to various magazine editors first thing this morning:

I would like to know what bilge pumps they had

ost important what hand powered bilge pumps they had.

We hove to under missen alone and Dale Mitchell combination mate and cook, served a roast beef dinner complete with  yorkshire pudding roast  potatoes, all eaten in civilized fashion off Iolaire’s gimbled table.

Wine was served but the  wine bottle’s center of gravity is  too high so that  resided in the  lee bunk and  we had to drink our wine out of short glasses as again  the  center of  gravity of wine  glasses is  too high to use  them on the gimbled table.

We sprang a leak(eventually traced to a broken stem bolt an area of the boat  we did  not  touch during  the rebuild) and started leaking like a sieve.

We discovered that all was well if we  pumped 5 minutes out of every 30.

The gale moderated so we got under way but  the  wind  was still NE, so it was a dead beat  to windward to Horta.

The  three best helmsman rotated 3 hrs on 6 off, the three other crew rotated 3 on six off standing or rather sitting doing pumping watches.

Thus  we were taking in 250 gallons an hour but it was not a serious problem.

We did this for about 48 hours until we reach Horta.

Once in Horta we brought Iolaire on to the ramp (no hauling facilities then in Horta) semi dried out, tide about 2′ knocked out the offending bolt, checked the bilge found a bronze rod the same size 3/4″, made up a new bolt, knocked  in the new bolt and problem solved.

How many modern boats can easily HAND PUMP 250 gallons an hour day after day?

To give you some sense of what we poor sailing magazine editors have to put up with, I have not altered a word of Don’s missive. But he raises a valid point. Back in the days when all boats were wood, having large-capacity manual pumps aboard was considered an absolute requirement. Nowadays, in the era of fiberglass boats that don’t normally leak very much, you don’t see them so often.

Which leads to another question. These boat-lost-after-striking-whale stories now seem quite common. But shouldn’t a modern ocean-sailing boat, particularly a cruising boat, be able to hit a soft, blubbery object like a whale at a speed of 5 to 7 knots without springing a major leak????

(All photos are courtesy of World Cruising Club)

UPDATE: World Cruising Club advises that notice of the Mayday call from Outer Limits was received at 2230 UTC, not 1030 UTC, as reported above.