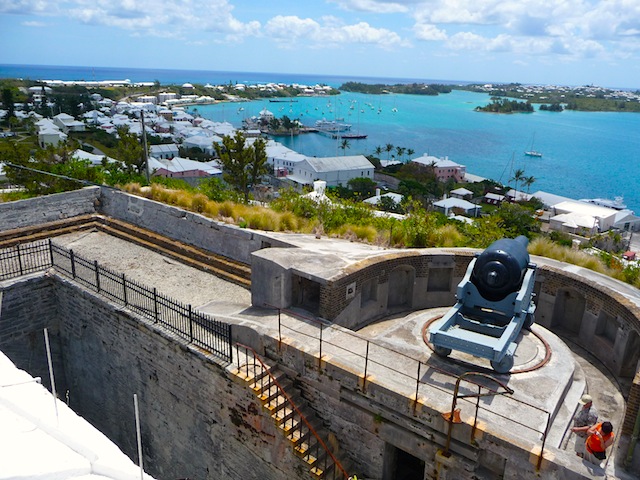 The view from on high. Bermuda Radio’s perspective on the world

I FLEW HERE INTO BERMUDA on Sunday to catch the start of the World Cruising Club’s ARC Europe rally, which departs tomorrow afternoon for the Azores and Lagos, Portugal. It is not the first time I’ve flown to Bermuda, but this will be the first time I’ve both flown into and out of Bermuda, as I normally come (or leave, or do both) by boat. Which means I normally get to chat with the guys at Bermuda Radio (ex-Bermuda Harbor Radio), who are keenly interested in the comings and goings of anything that floats within 50 miles of the island. Over the years, in answering their interminable questions about my intentions and the gear I have on my boat, I’ve developed a great deal of respect (and even affection) for these fellows, so when I learned that the WCC had organized a tour of the Bermuda Radio facility I begged to tag along. For anyone who ever sails out to Bermuda, this a bit like getting to visit the Wizard of Oz.

Along with 14 ARC sailors, I was transported up to the top of the highest hill overlooking St. Georges Harbor, where we climbed up various stairways and across a very deep moat into an old fortress that now houses a small, but fabulously equipped communications center. Inside we were introduced to a trim Irishman from Cork, Denis Rowe, who serves as Bermuda Radio’s Chief Maritime Operations Controller. 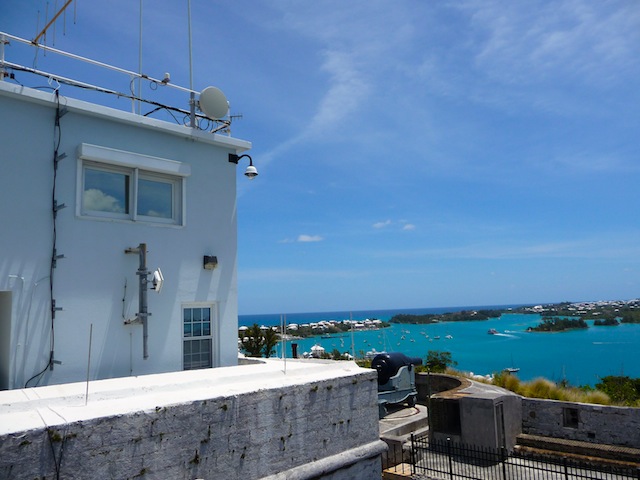 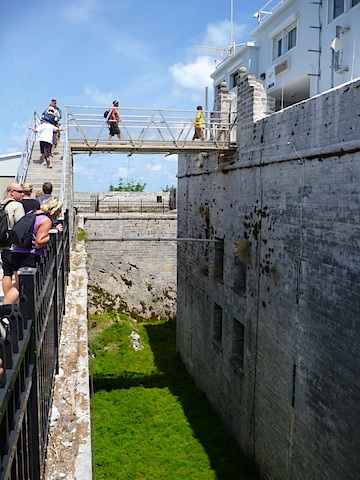 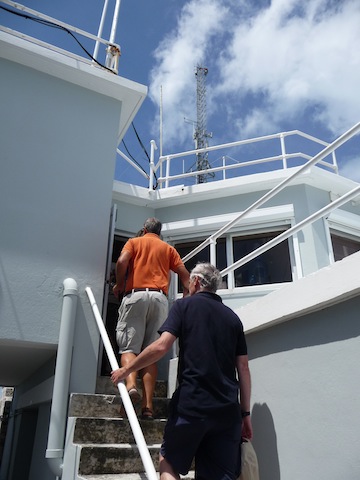 Off to see the Wizard

All told there are just nine Bermuda Radio staff (of whom currently five are Bermudian), who stand a series of one-man eight-hours watches 24/7. While on watch, each radio operator is responsible for managing all vessel traffic within 50 miles of Bermuda, all port operations, and all SAR operations involving any vessel within 200 miles of Bermuda or any Bermudian-registered vessel (or aircraft) operating anywhere in the world. They are also responsible for managing any aircraft emergencies that take place in Bermudian airspace at night while the airport is closed. 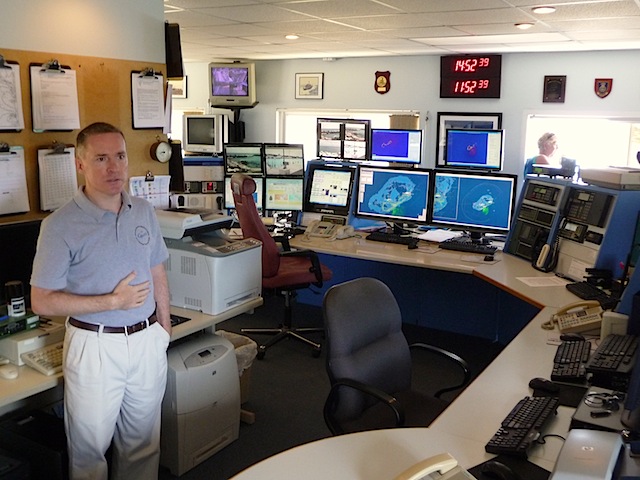 Denis Rowe–Man Behind the Curtain

To do all this, the man on watch monitors numerous radio sets (MF, HF, and several VHF frequencies), an AIS display, several remote camera feeds (of the harbor and customs dock), and some large radar displays. He will also be notified directly of any EPIRB alerts on Bermudian vessels worldwide. In addition to generally listening for trouble on any monitored frequency and responding to any party hailing Bermuda Radio, he is responsible for initiating contact with any vessel within 50 miles that does not voluntarily check in.

One very important aspect of the job is making sure that passing ships over 1,000 gross tons do not come within 30 miles of the large reef system that extends north of the island. After two major groundings back in the 1980s, one of which involved a large tanker (which fortunately was not breached), Bermuda successfully petitioned the International Maritime Organization to establish an exclusion zone around the reef, which it now zealously enforces. Thanks to the unceasing efforts of Bermuda Radio, no large vessels come anywhere near the reef without receiving explicit permission and guidance.

SAR traffic, obviously, is also a high priority. According to Denis Rowe, Bermuda Radio handles about 600 incidents a year. For SAR incidents inside the reef and up to 30 miles offshore, Bermuda can respond with vessels of its own. For incidents out to 200 miles, Bermuda Radio coordinates with either passing commercial traffic or with U.S. Coast Guard aircraft based on the continent. (Since the U.S. Navy abandoned its base here back in the 1990s, there have been no SAR aircraft based on Bermuda.) For international incidents involving Bermudian vessels and aircraft, Bermuda Radio will coordinate with SAR authorities all around the globe. 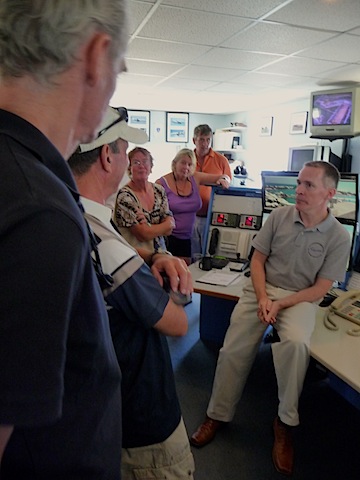 As for those of us on yachts, we are mere flies in the ointment. According to Denis, approximately 1,000 yachts visit the island every year, and though he was much too polite to say as much, for the most part we must seem like a pain in the butt. Bermuda Radio contacts and identifies every yacht coming in, takes an inventory of the crew and communications and safety equipment aboard (this is all stored in a data base, so they remember you next time you visit), orders course changes if necessary (they like you to stay well away from the reef), and gives specific clearance to both enter and depart St. Georges (or to move between St. Georges and Hamilton).

Having dealt with Bermuda Radio many times over the years, I can attest that they are quite strict. (I recall, for example, approaching St. Georges late one night in a yacht with no electronics and a busted anchor windlass and having to stay hove-to offshore until daylight because Bermuda Radio refused to let me come in and lay on a dock.) But they are also unfailingly polite and compassionate (i.e., I could tell the guy on watch felt bad about not letting us in that night). Most of all they are extremely helpful. The biggest favor they ever did me was back in 1995, when I sailed out to Bermuda in Crazy Horse and got caught in the outskirts of a tropical storm. We were fine, but my mom was worried sick and called up Bermuda Harbor Radio (as it was then known) to vent her anxiety. Somehow, miraculously, they chilled her out, assured her they were in contact with us, and even called her back to let her know we were safe as soon as we finally approached the harbor.

So if ever you find yourself out this way in a boat and are tempted to feel annoyed with the disembodied voice on your radio telling you where to go and what to do, I urge to keep in mind that the voice is standing watch alone and has a lot of other stuff to deal with.

Most of all, you should simply be grateful for its existence.

[Special thanks to Denis Rowe and Steven Pegg (who was standing watch at the time) for allowing us to come visit yesterday.]