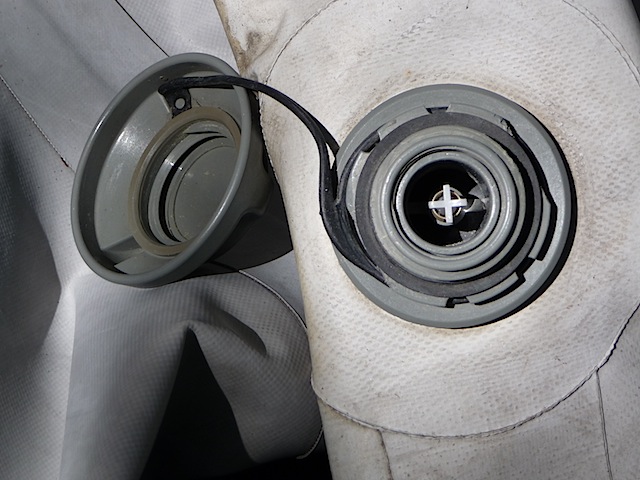 SOME MAY RECALL that last year’s sailing season aboard Lunacy began with a series of amusing mishaps, one of which involved my inflatable dinghy, a 9-foot Avon with a roll-up floor. The very first time I tried to inflate it, the stem of the valve for the keel compartment popped out like a jack-in-the-box and went flying into the water. I simply ignored the problem and spent the whole season puttering about in a dinghy with a flabby keel. This year, however, I resolved to fix the valve and so paid a quick visit last week to Chris Harrison at Chase Leavitt in Portland, who bestowed upon me a rebuild kit (Avon Part #V00001) for Avon A7, B7, and C7 valves.

I have no idea if mine is an A7, B7, or C7 valve, but I do know it has two major body parts. One is buried inside the inflatable compartment, with a threaded flange that pokes out the compartment hole. Inside the flange is a tiny cylinder in which the valve stem is mounted. The second body part, which is external, screws down on to the flange of the first part and seals the compartment hole shut; it also incorporates a valve cover retained on a short rubber leash.

The critical working part is the valve stem, which is spring-loaded and screws into the center of a small rubber diaphragm inside the inflatable compartment. The stem can be locked in an open position (just push in and twist), in which case the diaphragm is held away from the valve’s internal body part, allowing air to flow freely in either direction. When the stem is released into the closed position, the spring pulls the diaphragm up against a seat on the internal body part. Air can then be forced into the compartment, against the tension of the spring, but cannot escape.

What happened to my valve was that the stem managed to unscrew itself from its diaphragm. Thus there was nothing to restrain it from pouncing into the air when I unlocked it from its open position; the diaphragm, meanwhile, was lost somewhere in the bowels of the inflatable compartment. The rebuild kit Chris gave me contained all three of the parts I was missing–the plastic valve stem, its spring, and the rubber diaphragm–plus one other, a new rubber cap seal, which I did not need.

To install a new stem, you first need to unscrew the external valve body from the internal body’s flange. This requires a special tool from Avon, or a very large crescent wrench, or a large pair of channel-lock pliers. I had nothing suitable, so job one was a trip to the hardware store for a new pair of pliers. Equipped with these, I found it was fairly easy to separate the two parts. 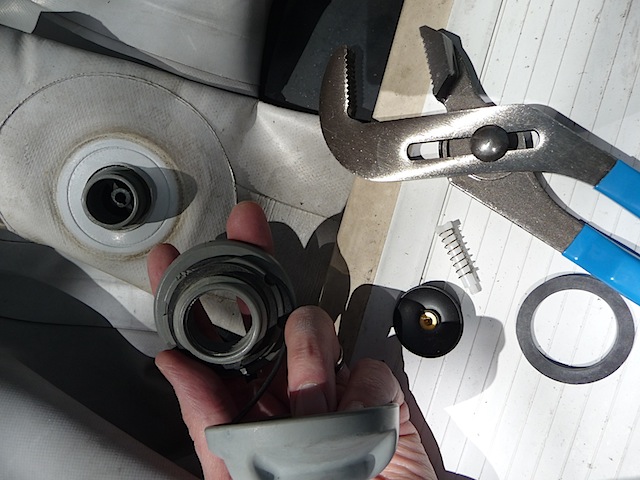 Next slip the spring on to the valve stem and insert the stem into the cylinder in the center of the flange. Lock it in place by pressing in and twisting it into its open position. To keep the stem from unlocking and accidentally leaping out again during the next rather awkward phase of the procedure, Chris Harrison recommends you stuff the flange with some paper towel and tape it up. 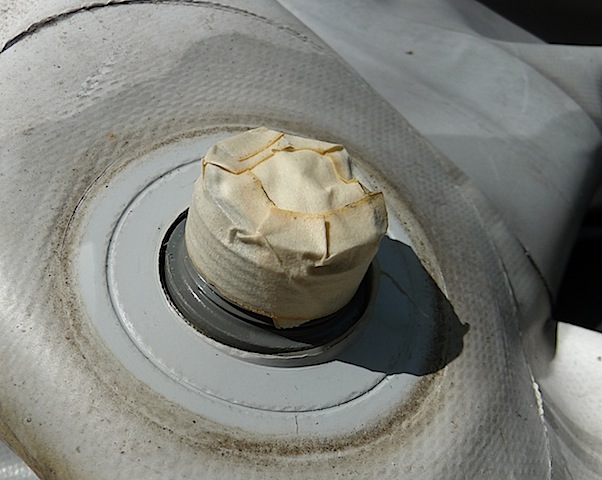 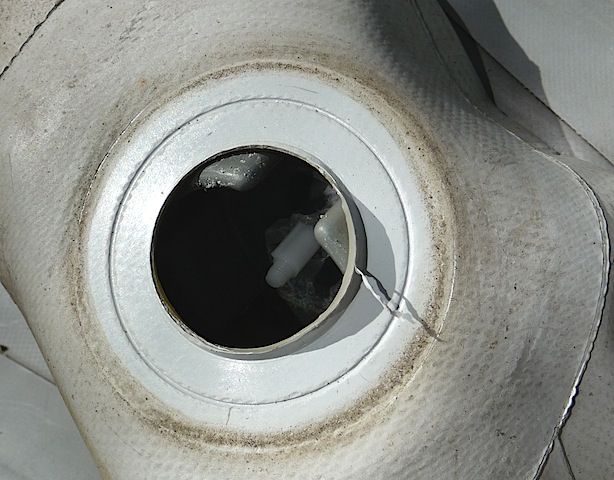 Peeking at the back of the internal valve body through the compartment hole. You can see the threaded end of the stem, on which the diaphragm must be mounted. In the medical world, I believe this is called “keyhole surgery”

Once you’ve screwed the diaphragm on to the stem, turn the internal valve body around so the flange again faces right side out. When doing this, make sure the flat rubber O-seal around the flange is still in place. If it has come off the flange (which is very likely), you’ll need to fish it out with your fingertips and carefully nudge it back into the compartment into its position surrounding the base of the flange. 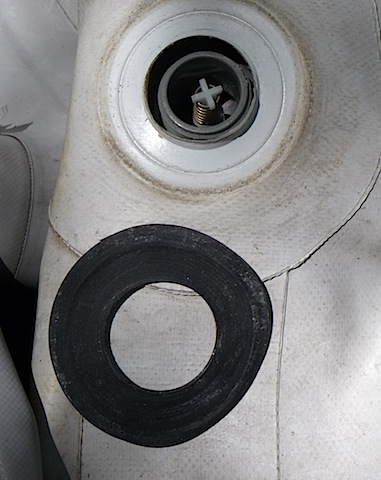 The flat O-seal exposed. It belongs on the other side of the hole, around the flange inside

With the O-seal in place, seated flat around the flange, you can then pull the flange back out the compartment hole, screw on the external valve body, and remove the masking tape and the bit of paper towel you stuffed into the flange before. Then hook up your foot-pump, start pumping, and pray the valve works properly. 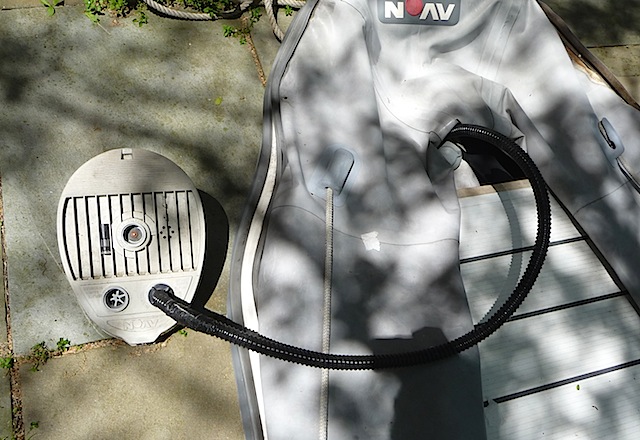 In my case, I found it did not. So I took everything apart again and discovered I had cross-threaded the diaphragm on to the end of the valve stem (see risk A above) so that it was slightly crooked and could not seat properly when closed. I therefore had to refiddle the fiddliest part of the procedure.

Fortunately, my second attempt was successful, and the valve now works perfectly, so I look forward to running the dinghy this season with a firmly inflated keel. I am confident, however, that I will fall victim to other interesting mishaps in the months to come, and I look forward to sharing these with you.

Note: My one critique of Avon Part #V00001 is that instead of including an extra cap sealing ring, it should include an extra flat O-seal for the flange. It seems to me you are far more likely to need the latter than the former. 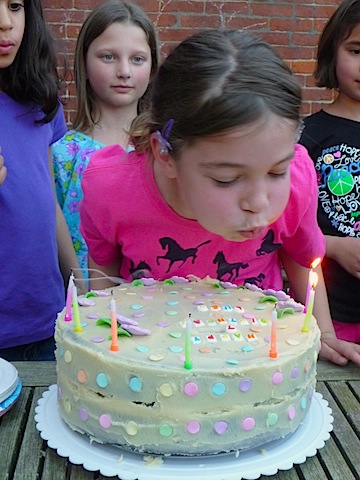 PS: I performed this procedure on the patio in our backyard at home yesterday, shortly before we held my daughter Lucy’s 7th birthday party in the same location. She made her wish… and successfully extinguished all the candle stems.