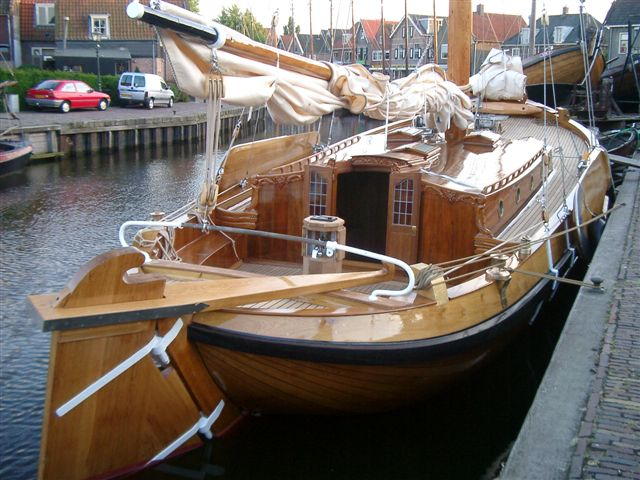 My association with this vessel dates back to 1992, when I sailed across the Atlantic with Cliff and Ruth Ann Fremstad aboard their Alden schooner Constellation. After we unfortunately lost Constellation in a river in Spain that summer, I was a bit surprised when Cliff and Ruth Ann, who had been living aboard the schooner for several years, announced they would have to move back aboard their other boat. My surprise morphed into amazement when they described it to me and showed me some pix. It was a 52-foot Dutch botter jacht named Groote Beer (or “Great Bear”), which they claimed had been built for Hermann Goering (yes, that Hermann Goering) during World War II.

The boat, as you can see from the photos above and below, is rather ornate and is covered with all sorts of incredible ornamental wood carvings. The story was that since Goering had ordered this yacht built for his personal use, the guys in the yard figured they’d be safe and secure during the Nazi occupation as long as they were busy working on it. So they took their sweet time, added lots and lots of details, and made sure the boat was never finished until the war was over. 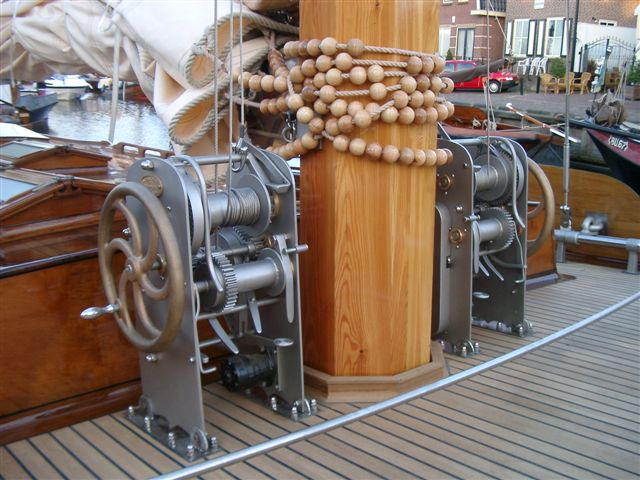 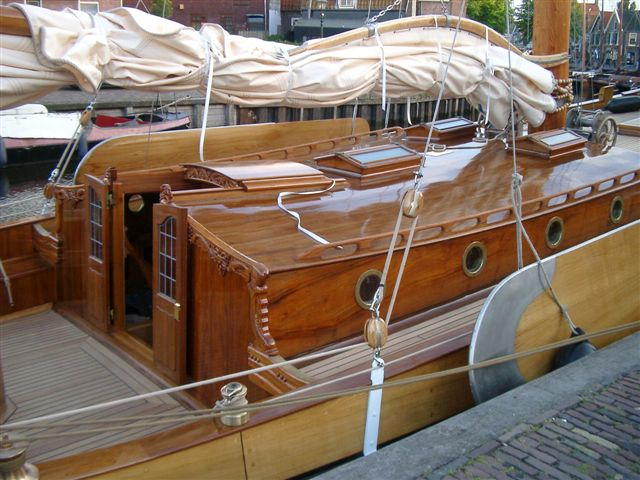 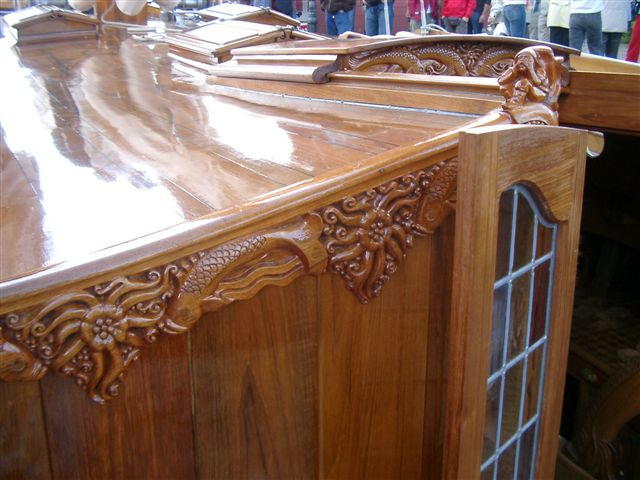 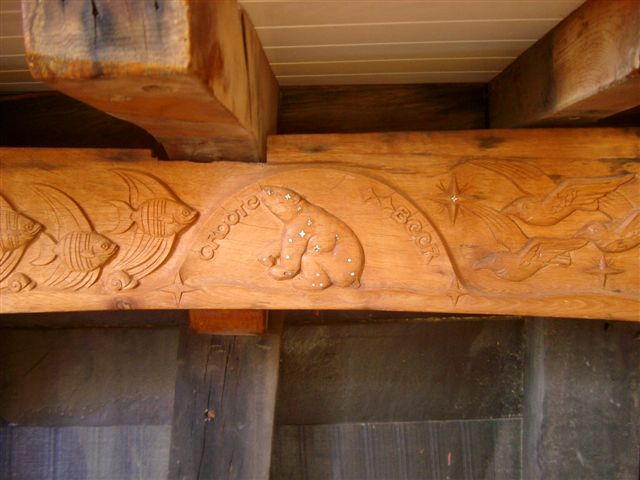 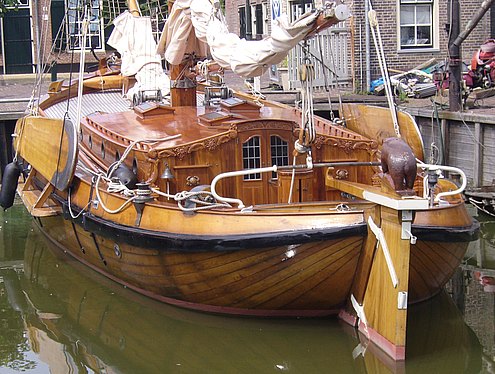 I accepted all this as fact, and remembered the story again when I read Annie Proulx’s most excellent novel, The Shipping News, in which a fancy Dutch yacht, allegedly built for Hitler, plays a minor role. The boat in the book is named Tough Baby (ex-Das Knie), and her owner describes her thus:

Traditional Dutch barge yacht design, but marvelously luxurious with these incredible details. I think, the finest Botterjacht ever built. When we first saw her she was a total wreck.

The absolutely marvelous carving. The carving is everywhere, these incredible master carvers worked on it for nine years. All the animals known. Zebras, moose, dinosaurs, aurochs, marine iguana, wolverines, we’ve had internationally known wildlife biologists on board here to identify all the incredible species. And the birds. Utterly, utterly bizarre. It was built for Hitler, as I suppose you know, but he never set foot on it. There were a thousand delays. Deliberate delays. The extraordinary Dutch Resistance.

I felt quite certain the fictional yacht in the story must be based on Cliff and Ruth Ann’s “other boat” Groote Beer and always wondered how Annie Proulx ever learned of it. 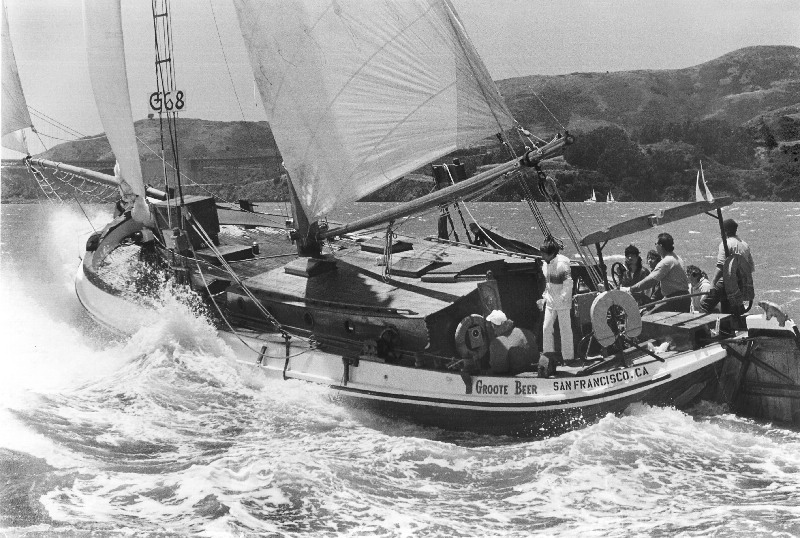 Racing on San Francsico Bay in 1988, during Cliff and Ruth Ann’s tenure as owners

I heard from Cliff and Ruth Ann again after I published my blog post about Constellation, and they sent me links to material posted by a Dutch emigrant, Jack van Omman, who decided to get to the bottom of the Groote Beer myth after he figured out that it was his uncle who had supplied the spars and blocks for the boat at the end of the war. 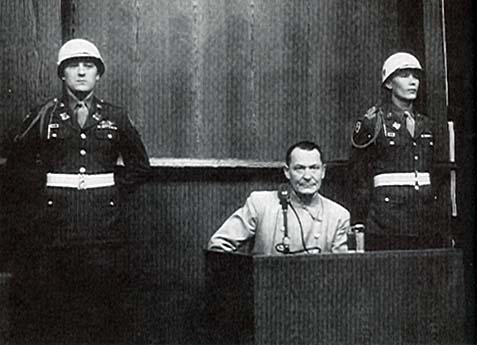 Goering testifies at Nuremburg as to the yacht’s ownership

Groote Beer‘s true commissioning owner, it turns out, was Theodor Temmler, owner of a German pharmaceutical company, who ordered the boat built at a yard belonging to Janus Kok in 1940. By the end of the war it was still unfinished and was seized by the Dutch government and sold at auction to one Willem Greeve, who finished the boat and had all the custom woodwork installed in 1948.

Greeve in turn sold Groote Beer in 1953 to an American, Charles Donnelly, president of Feadship, who shipped her to New York and evidently wandered the East Coast aboard her telling fantastic stories of her origins. These were repeated in local newspapers (you can see examples here and here) and eventually made their way into Esquire magazine, and so was the Goering legend born and promulgated. This eventually included some pretty outrageous details–including an assertion that Goering had ordered a special Panzer unit to Africa just to acquire wood for the boat. (Click here to see more on the Afrika Korps and boatbuilding.)

No doubt it was this rich vein of fantasy that Proulx tapped into when she created her own fictional Nazi yacht in The Shipping News.

In 1955 Groote Beer was purchased by Robert Johnson (later owner of Ticonderoga and Windward Passage), who brought her to the West Coast through the Panama Canal and sailed her as an unofficial entrant in the 1957 Transpac. He sold her again in ’58, and she then passed through various hands, until Cliff and Ruth Ann bought her in 1982. They finally sold her in 2001 to Jan Willem de la Porte, the step-grandson of the Willem Greeve who originally bought the boat from the Dutch government, and he shipped her back to Holland, where she has since been restored to her former glory.

Even without the bit about Goering, it still makes for a nice bit of boatlore.

COINCIDENTALLY: I actually have some experience sailing boats like this. Way back in 1987 I was once asked to help deliver a Dutch-built lemsteraak called Antje from Long Island to Newport. This was a type of botter jacht (just 32 feet, as I recall) with a wide, flat, barge-like hull fitted with leeboards and a gaff rig set on a tabernacle. Just like Groote Beer, she was built of wood and finished bright and was absolutely gorgeous.

Unfortunately, we embarrassed ourselves terribly by sailing Antje right on to a beach on Block Island in the middle of the night. Built the way she was, however, she didn’t mind this at all, was easily dragged off, and no harm was done.

Amazingly, I saw Antje again, years later in a boatyard in Florida, not too long after I signed aboard Constellation as crew. I remember at the time thinking this might be an omen of sorts, and I wondered if Constellation would suffer the same fate as Antje.

Which she did (though, unlike Antje, she did not survive it).

Funny how these things work, isn’t it? 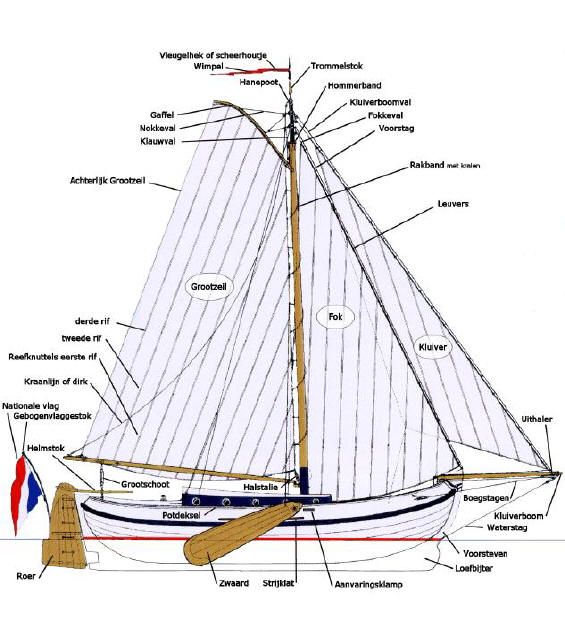 (Working parts of a lemsteraak)