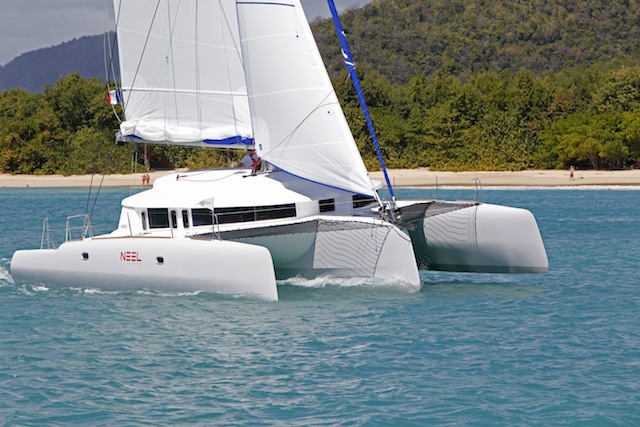 Theoretically, I was to spend all day Monday testing boats after the “multi-cocks” show in Lorient, but the weather was so foul everyone cancelled on me. Instead I managed to cram in a couple of short tests during the last day of the show, including one on the new Neel 45, an intriguing trimaran that tries to fit cat-sized cruising accommodations into a three-hulled format.

This is not a new concept. Early cruising tris, those slab-sided beasts built of plywood back in the 1960s, tried to pull off this trick by pushing sleeping spaces into the bridgedecks connecting the main hull to the amas. These boats proved to be a bit too heavy and unwieldy to sail as well as a trimaran should and were also fragile. You might recall the disintegration of Nigel Tetley’s Piver-designed Victress during the Golden Globe Race in 1969, or the less-well-publicized fracturing of a plywood tri sailed by cruisers Val and Ernest Haigh some years later.

Since then cruising tris have been much leaner, with accommodations only in the main hull. These boats sail very well, but have cramped living quarters. The most successful ones are rather small, have folding amas, and are little more than super-fast camp-cruisers. 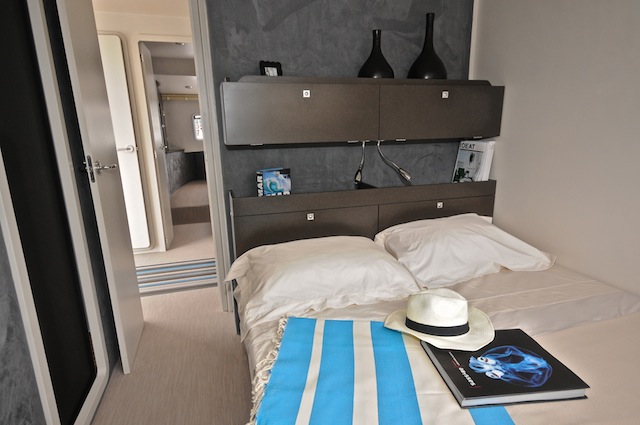 One of the two main staterooms. Each has an en suite head. Not too shabby for a trimaran!

The Neel 45 (and its somewhat larger predecessor, the Neel 50, introduced a year or two ago) seeks to reverse this trend. Again, accommodation space is increased by putting primary sleeping spaces in the solid bridgedecks either side of the main hull. But these are proper staterooms, with nice double berths and big ports that let in lots of light, and are much more pleasant than the caves found on the ply tris of old. There’s also a small stateroom with a double up in the bow, plus (on the charter version I sailed) four single berths inside the two amas, making for a total of 10 available berths overall. 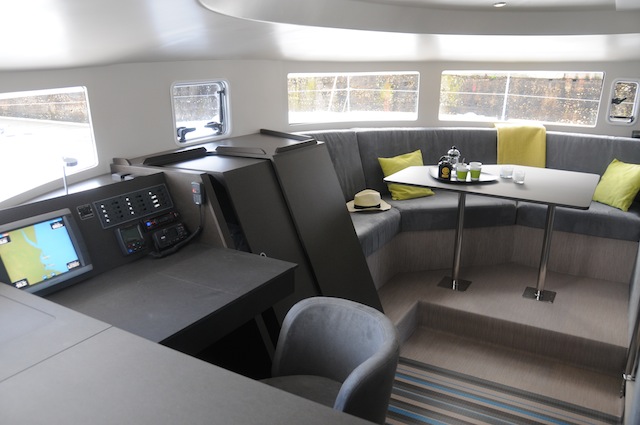 The main saloon, with nav desk in foreground and dinette behind. The cabin sole is finished with a very durable synthetic fabric

The central hull is taken up by a pair of heads aft, set either side of the central walkway, a galley amidships, and a spacious saloon forward, behind a semi-circular array of port windows that provide exactly the sort of wrap-around view of the world found on cruising cats. Beneath the cabin sole is a vast basement, with lots of room for storage and systems. 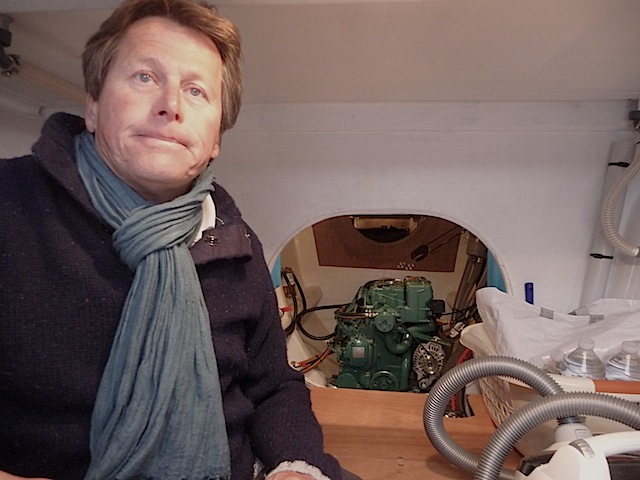 Down in the basement. The engine, you will note, is very accessible 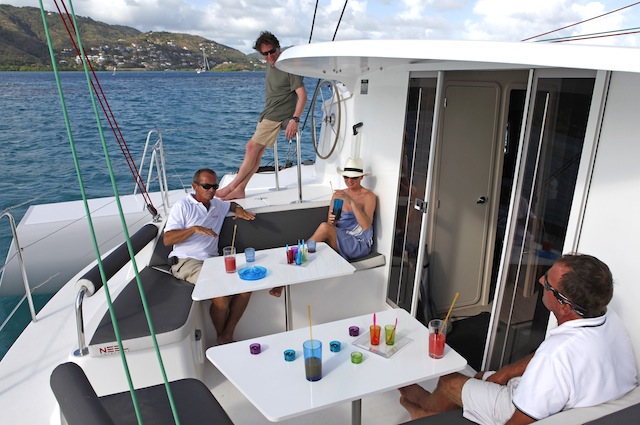 Meanwhile, out in the cockpit. This is a publicity shot. It was nowhere near this nice in Lorient

Construction, of course, is modern and light: the hull and deck are foam-cored glass; interior components have honeycomb coring. Likewise with the design. All three hulls have super-fine entries and narrow waterplanes. To fit in all the living space, the main hull flares out into large nacelles above the waterline, but there’s still quite a bit of clearance, both horizontal and vertical, underneath the bridgedeck. The rig features a big roachy square-headed mainsail (air draft is 63 feet) with a working jib and genoa set on twin furlers forward. There’s also a short sprit for flying big A-sails and screechers. 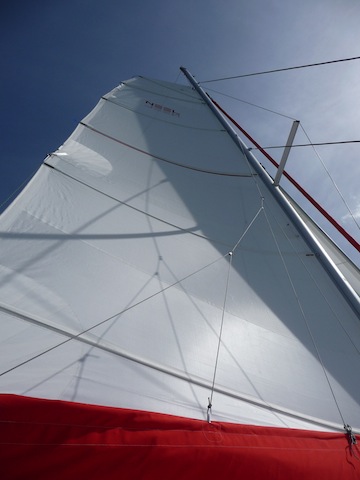 It was windy and pretty rough outside, so we conducted all of our brief test (in company with members of the Belgian yachting press, who were conveniently labeled as such) inside the harbor. The wind, as a result, was very quirky, constantly switching direction and puffing up and down from less than 10 knots to over 30 apparent.

I wouldn’t want to say too much without sailing the boat a bit longer in more stable conditions, but I was impressed. The boat was very easily driven. Under power we made 11 knots at 3,100 rpm; at 2,100 it was 9.5 knots. With the sails up (one reef in the main, plus the self-tacking small jib) we were moving at or near wind speed when the wind was below 10 knots and at 9 to 11 knots when things got gustier. Tacking angles were reasonably tight, and the boat was fully powered up at a 40 degree apparent wind angle. Which really surprised me later when I saw a profile drawing and noticed how insubstantial the fixed keel under main hull is. 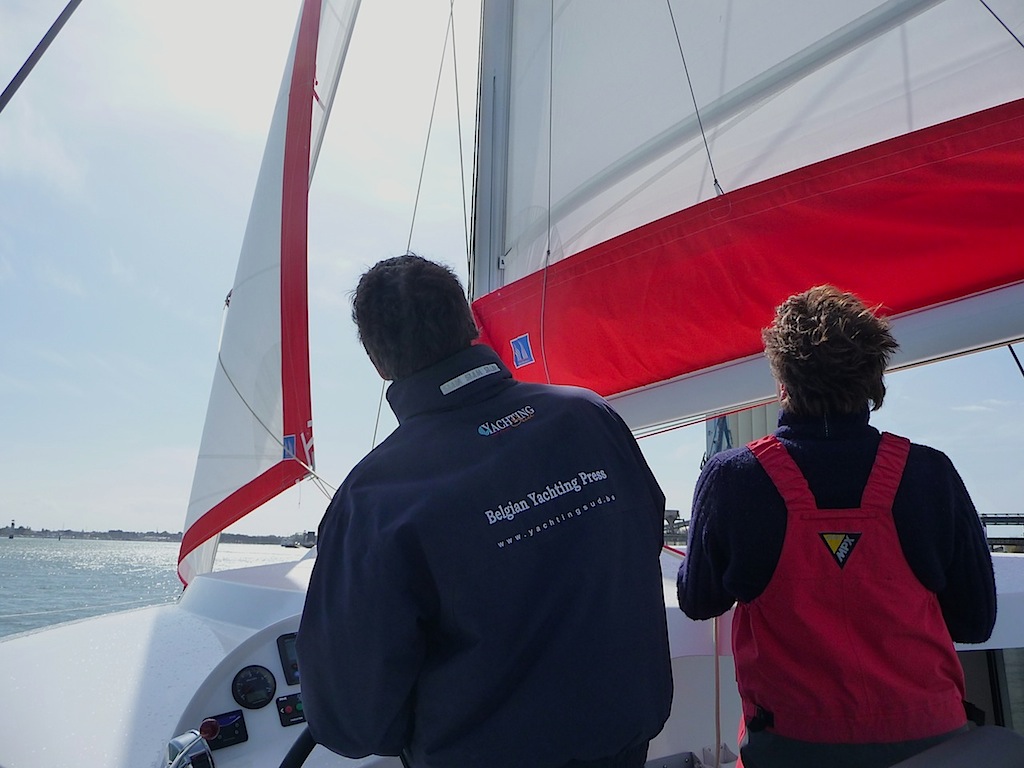 Under sail in Lorient. Guess which one is from Belgium

The helm at all times was light and very responsive, much more so than on any cruising catamaran. Indeed, perhaps the most impressive thing about the boat was how stable and controllable it was when we suddenly got hammered by big gusts of wind. There were no big loads on the wheel, there was no tendency for the boat to round up, and though the boat does heel much more than a cat, there was nothing at all dramatic about it.

Under power, as we came back to the dock, I noticed she was a bit twitchy. The boat has a lot of windage and was easily pushed around in the gusts. It took some attention to keep her straight, and I was very happy to have a bow-thruster at my disposal.

Coming away from the boat I was wondering how she’d do when loaded up for cruising. I’d certainly love to find out sometime. Overall, compared to a cruising cat of comparable length, I’d say this boat in fact has somewhat less living space, but markedly better performance. Certainly worth thinking about if you’re in the market for a new cruising multihull. 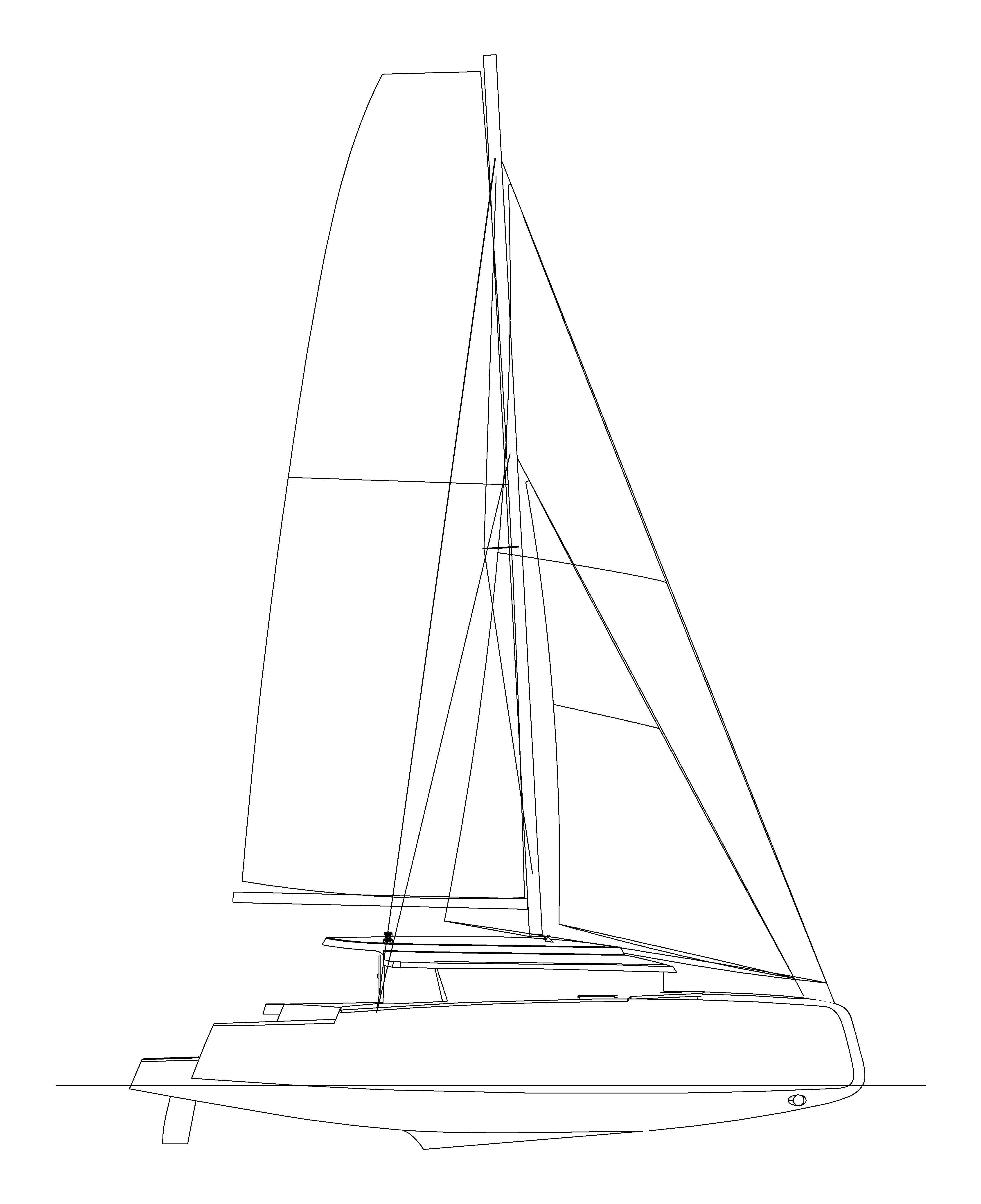