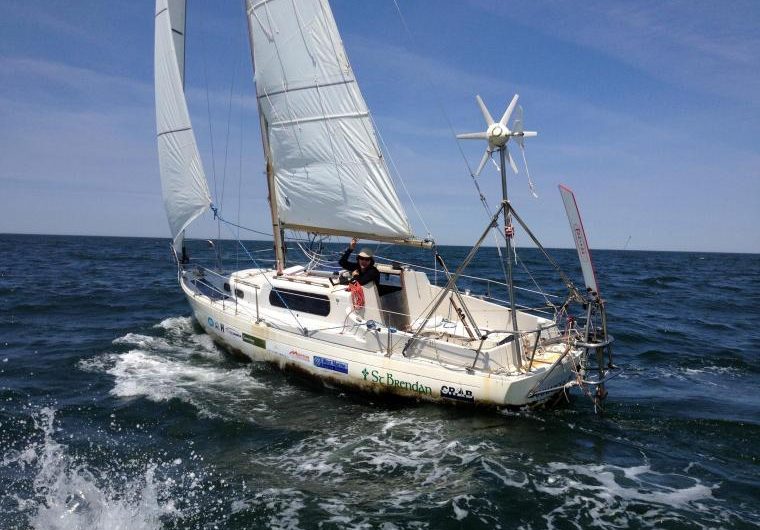 You’d think that in a voyage of now 310 days–the time Matt Rutherford has been at sea since departing the Chesapeake almost a year ago–the hardest part would be far behind him.

But in fact, the hardest part is right now.

Matt has the Chesapeake Bay Bridge Tunnel in sight, and is only a handful of miles from crossing his outward track, which would make him the first person in history to complete a solo nonstop voyage around both American continents. He’s already been recognized by the Scott Polar Institute as having piloted the smallest vessel ever through the Northwest Passage, and if the weather cooperates, he’ll make history again in a much bigger way sometime today.

The trouble is the weather is not cooperating.

This home-stretch run has doled out perhaps the toughest conditions Matt has faced yet, mentally at least. He’s sleep-deprived from trying to keep watch in the heavy shipping around Cape Hatteras, and he weathered a spring gale just a few days ago on his way north from the Caribbean. And now, with the finish line in sight, he’s run out of wind. Yesterday at this time, he was closer to finishing than he is now 24 hours later.

But his spirits are high. His friend and old yacht delivery compatriot Simon Edwards and I chatted yesterday on the phone. Simon had just completed another run down to the Caribbean and had intercepted Matt 600 miles off the East Coast.

“You can’t believe how good it was to talk to him face to face,” Simon told me on the phone yesterday. “This is just unbelievable, what is about to happen when he crosses the finish line.”

I can’t agree more. Simon and I were giddy with pride at what our friend has accomplished. I talked to Simon on the phone not as a journalist, but as a friend and supporter, and suddenly, for both of us, sensibility is kind of out the window. At last we’re able to release some of the tension we’ve stored up, especially Simon, who has organized Matt’s supply drops in some far-flung places along the way. It’s almost over. We can almost relax.

My last real communication from Matt was last July, when he was waiting for the ice to clear to enter the NW passage. My wife and I were in St. Pierre on our own boat, about to set out across the Atlantic. “Have a good trip,” he wrote to me, when his onboard email was still working. “Godspeed.”

I spoke with Matt yesterday on the phone for the first time since then. “Right now I’m drifting at 3.7 knots in the wrong direction,” he told me. He was frustrated and tired, but he couldn’t hide his excitement either. Matt’s character is still intact, and he’s still Matt.

The trip was never totally about him, and even as he neared the finish line, we ended up chatting not about the Arctic or Cape Horn, but about Portugal, Matt giving me some pilotage advice for an upcoming trip I have planned.

There’s going to be a real circus in Annapolis on Saturday. The whole town is planning a hero’s welcome for Matt, who is expected to step off the boat for the first time at high noon at the National Sailing Hall of Fame at the City Dock in town. The organizers are encouraging a spectator fleet to escort Matt and St. Brendan, the 27-foot Albin Vega that has safely seen Matt through his adventure, from Thomas Point Lighthouse into the harbor. Gary Jobson will be onhand ashore, emceeing the event, which will include the Governor of Maryland and several other dignitaries (Iowa Senator Tom Harkin has twice spoken about Matt on the floor of the US Senate), as well as Matt’s band of supporters, which I suspect will have grown exponentially by then.

Godspeed, a Hinckley SW 50 Matt has delivered several times with Simon, just anted up a matching donation of $21,000.00 towards Matt’s goal of raising $250,000.00 for Chesapeake Region Accessible Boating (CRAB), and I hope the donations will start rolling in now that he’s this close to finishing. Physically, Matt can sail for as long as he wants. But the folks who CRAB support can’t, not without some physical help and modified boats.

Join the historic party in Annapolis this Saturday, April 21, and meanwhile check out Matt’s story online at solotheamericas.org. And donate to CRAB. Matt’s been solo for 310 days–now he and CRAB need your help.

He did it! At about 10:42 EDT this morning, Matt Rutherford officially crossed his outward track to become the first person ever to sail solo nonstop around the American continents.

“I just crossed the line like, literally, two minutes ago,” Matt told me on the phone. I called to congratulate him after turning on my computer and noticing the tracker had turned off where it started 310 days ago, the circle complete. I never expected him to answer, but he did, and he was exuberant.

“Let me call you back in a little bit,” he said, excitedly. “It’s blowing like 25 knots and there’s a lot going on.”