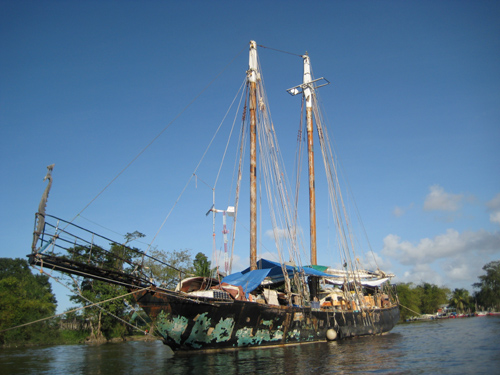 It’s been a while since I mentioned Reid Stowe, not because I’ve lost interest in him, but because he went dark for several weeks, not long after he and his family arrived in the jungles of Guyana aboard their schooner Anne back in early January. Now he’s got his communications sorted and is again transmitting regular updates.

Last we visited with Reid he was booking into Guyana at Georgetown and accidentally violated the local pilot boat with his bow. Since then he’s made friends with the pilots and got some help conning Anne up the coast and into the Essequibo River.

They had a nail-biter getting through the shoals at the entrance, as the big schooner (she draws 10 feet) ran aground a couple of times and jammed up her already damaged rudder. Reid did some snorkeling on the rudder, and eventually they made it upriver to the village of Supanam, where there’s a whole lot of boatbuilding going on.

Now they’re settled in and Anne‘s refit has begun in earnest. Reid’s original plan was to fix up the boat in Guyana and return to New York City by this summer, but I won’t be too surprised if it takes longer than he expected to set things right onboard. I’m particularly curious to see what he does about the rudder. You’ll recall that the top of the stock, with quadrant attached, snapped off in the mid-Atlantic en route to South America, and the crew have been steering with lines run over the side to the rudder itself ever since.

To fix this I reckon Reid needs not only to haul the boat, but to drop the rudder, too. Whether this can be accomplished on the river bank in Supanam remains to be seen. I have a feeling Anne is much deeper and heavier than most of the boats that ply the river.

I urge you to follow Reid at his website now that he’s posting again. Lots of local color there; e.g., here’s a shot of Reid and his son Darshen with a jaguar that got shot after taking out some of the local livestock. 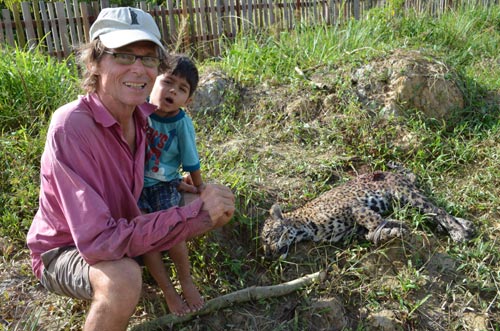 If you despise Reid and all he stands for and would like to taunt and humiliate him and his family, you can also follow this forum discussion at Sailing Anarchy.

MEANWHILE, over in the Frozen Foods Department, Jarle Andhoey, last seen departing from Antarctica after accomplishing very little in the Ross Sea, is now apparently returning to Antarctica, to an as-yet-unnamed Argentine base on the Antarctic peninsula, so he can repair a broken boom and replenish his supply of diesel fuel.

I had a feeling this little drama wasn’t over yet. Given that Jarle has made a point of alienating all officialdom in the Seventh Continent, has crew without papers aboard, never got clearance to leave New Zealand, etc., etc., etc., it will be interesting to see how he is received when he comes hat in hand asking for help.

Also, the clock is ticking. It’s getting late in the year to be that far south.