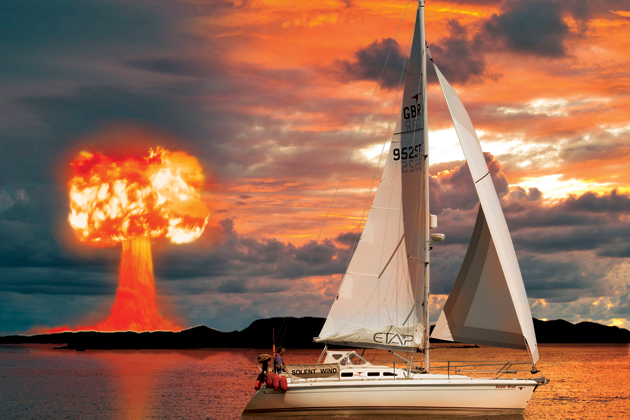 What if the Mayans were right? What if the world as we know it really does come to an end on December 21, 2012? If it’s true, one of the only ways you’ll be able to survive is aboard an unsinkable sailboat from Belgian boatbuilder ETAP. This according to doomsday prophet Patrick Geryl.

You remember ETAP, right? They were marketing their unique, rather innovative cruising sailboats here in the U.S. until the economy fell off a cliff in 2008. The big selling point on these boats was their double-skinned foam-filled hulls, which made it impossible for them to sink, even when filled with water.

I got to sail a few ETAPs for the comic back in the day, and I have to say they always impressed me. I thought they sailed rather well, and I found their build quality to be consistently well above average. I never felt the foam-filled hull was terribly clever (after all, Boston Whaler introduced that little trick just about half a century ago), but I was very impressed with a new steering system that ETAP launched–it was called ETAP Vertical Steering, or EVS–not long before they hit the wall economically.

EVS was a variation of the old whipstaff, the vertical tillers that were connected to conventional horizontal tillers to steer larger sailing vessels before steering wheels were introduced. Like whipstaffs, EVS tillers are vertical, but are directly connected to a boat’s rudder stock via a bevel gear. They have circular yokes at the top, so they feel a little like steering wheels when you stand behind them. Like a wheel, you push an EVS tiller in the direction you want the boat to go; unlike a wheel, the whole thing cants to one side as you do so. 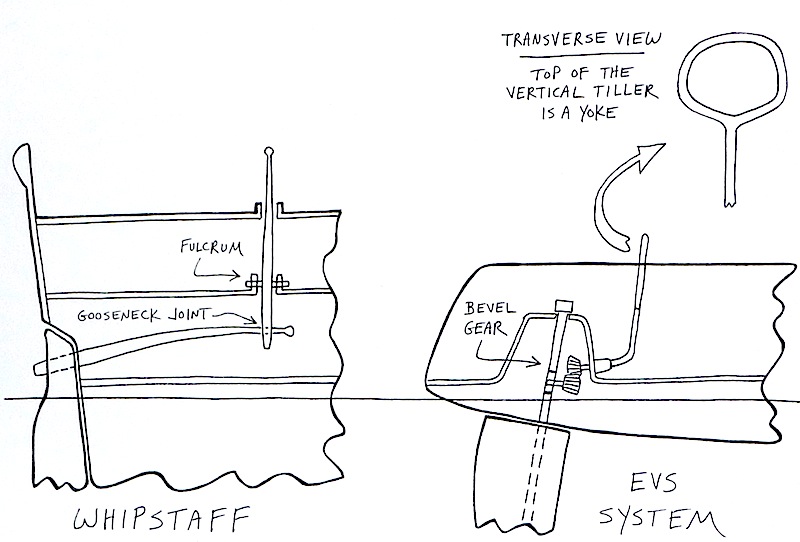 I really enjoyed steering boats with these things. Like a tiller, they give you a very positive feel for the helm and you can immediately see what your rudder angle is. Unlike a tiller, they don’t take up a lot of cockpit space. Also, there are lots of different ways to get comfortable while handling them.

But I digress. We were discussing the end of the world.

Geryl’s theories on the subject are a little obscure (you can check his website for details), but as I understand it there will be a huge solar storm later this year that will cause Earth’s magnetic polarity to reverse on December 21 (which is when the Mayan calendar ends), and all sorts of terrible things will then happen, including huge tidal waves and other calamities that will obliterate human civilization.

As documented in this video here, if you want to survive you need to be aboard an ETAP, or in a bunker high in the mountains, when all this goes down.

What’s remarkable here isn’t that this guy Geryl has developed a crackpot doomsday theory, but that ETAP has allowed him to develop it into a marketing scheme for their boats. If you visit their website (particularly their news page), you’ll see they’re playing a little game–pimping the guy while at the same time saying they have nothing to do with him.

In that the company (together with Dehler Yachts) went bankrupt in 2009 and hasn’t built a boat in years, it seems they have little to lose. Although they’re not quite dead yet. Currently the brand and all the molds and tooling for the boats belong to MIC Industries, a Belgian engineering and construction company. MIC keeps making noises about relaunching the business, but it seems they’re biding their time, waiting for a more propitious economic environment.

I’d expect in any event they won’t be doing anything too adventurous until December 22.