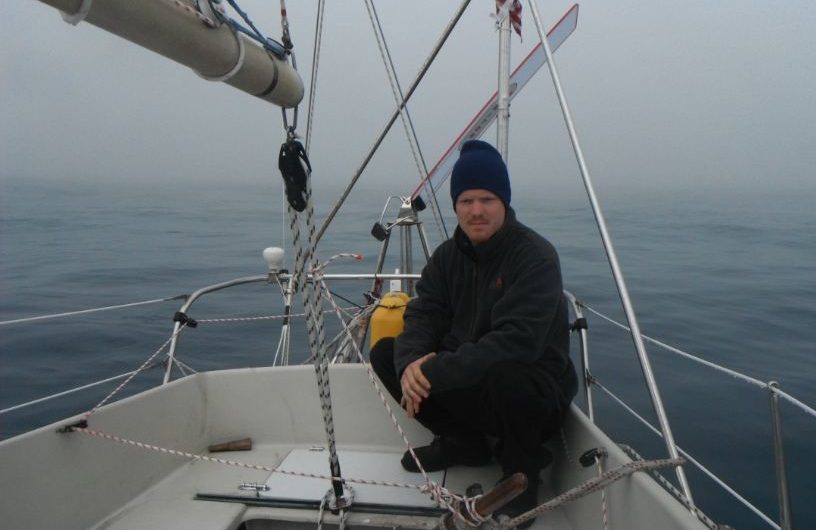 Editor’s note: I received another update yesterday on the fate of Matt Rutherford, who is sailing solo non-stop around the Americas aboard an Albin Vega, from his buddy Andy Schell at Father & Son Sailing. Matt is now off Brazil, where he recently had to meet a vessel off Recife to receive parts and gear needed to finish his voyage.

Two days ago (on February 29), I received this e-mail from Simon Edwards, Matt’s longtime delivery-skipper friend and his biggest shoreside supporter of the Around the Americas expedition: “It’s done. He picked the gear up this morning. Fantastic response from people, $30,000 [for Chesapeake Region Accessible Boating] and still coming. Will write more, trying to anchor up in Sandy Hook in freezing rain. Still, hard to complain being as Rutherford set the bar too high!!!”

Can’t argue with that. Matt is in the middle of setting the bar arguably higher than it’s ever been set before. He’s been compared to some of the sailing pioneers like Chichester and Robin Knox-Johnston, one of his heroes. And the cool part is those comparisons came from Herb McCormick, who recently completed his own Around the Americas expedition, albeit one with stops and aboard a boat with heat. The comments below came in an interview that the Washington Post conducted with McCormick for a recent article.

“What Matt is trying to do, I’m absolutely blown away by it,” McCormick said. “He’s doing this in a boat that, frankly, I’d be scared to sail from Newport to Bermuda. I’m in awe of the guy. This is such a mammoth undertaking, and to do it without stopping—alone—is mind-boggling.”

But anyone who has been following Matt’s adventure already knows that. At this point it’s almost beyond description.

So… to the original point of this update: Matt’s resupply, and my effort to get him as much publicity as possible in his effort to raise money for CRAB. It’s the third time he has received assistance during his voyage so far, if you count the stop off St. John’s, Newfoundland, where he received a replacement watermaker when his original exploded on him. At that point, so close to the start of his voyage, it was nearly a fatal blow. He also paused off Alaska, where he was interviewed by NPR, given some pizza and beer, and restocked with a few essentials. And now Recife.

Matt talks often in his blog about his water generator, and how he tried to fix it with an improvised propeller he cobbled together from an old boathook. It reminded me of Yves Gelinas and a similar repair he made aboard Jean du Sud, the Alberg 30 he sailed around the world via the Great Capes, stopping only at Chatham Island thanks to a capsize and subsequent dismasting. Gelinas is also the inventor of the Cape Horn windvane, which saw Mia and I across the Atlantic on Arcturus last summer. He’s a great and humble man, and Matt reminds me of him, particularly in his determination and ability to see something through.

Alas, some things are beyond his control. St. Brendan‘s engine, for example, is officially dead in Matt’s estimation.

“I took off all the wires and cleaned the connections with sandpaper,” he wrote in his blog at solotheamericas.org. “I was hoping it was a bad ground wire but unfortunately that wasn’t the problem. I tried to take the starter off but for some crazy reason it is connected to the engine with round bolts with a large Allen key fitting in the center. So I didn’t have the rather odd tool required to remove the bolts. Why they couldn’t have used normal hex head bolts is beyond me. So after three days of getting covered in engine grime I came to the conclusion that it is beyond my abilities to fix the engine.”

Gelinas didn’t even have an engine, by design, so Matt will be just fine without it. And Moitessier dove on his Joshua to remove the propeller before long passages to cut down on drag, knowing that far offshore it would be of little use anyway, save for using as a generator, which is precisely what Matt needs it for. Without it, it might mean fewer online updates and radio contact, but it won’t affect his ability to sail the boat. One of the things he received in Recife was a few small solar panels, which should cover his minimal power requirements.

Not to get too far ahead of ourselves–Matt still has several thousand miles to sail to reach the Chesapeake and close the circle on his journey–but there is already talk of what’s in the works in Annapolis for his return, and it includes some pretty high-profile boats and people. At this point, the mission is to continue getting the word out, both for CRAB, and to give Matt the hero’s welcome that he deserves, hopefully sometime in April.

Simon Edwards, in an e-mail to me last week, did a nice job summing up the absurdity of trying to plan for his arrival: “In a perfect scenario for their plans, Matt will sail round Thomas Point on the 14th April to arrive at the Hall of Fame dock at noon.”

Of course he will. Oddly enough, as I wrote in the current issue of Spinsheet, people back home might be thinking about Matt’s arrival, but I doubt (and hope, for the sake of his sanity) that Matt is. He’s still in his world.

Read about the rest of his resupply from the man himself at solotheamericas.org. And donate to CRAB online at crabsailing.org. Check out the audio of my chat with Matt before his adventure, which is posted on fathersonsailing.com.