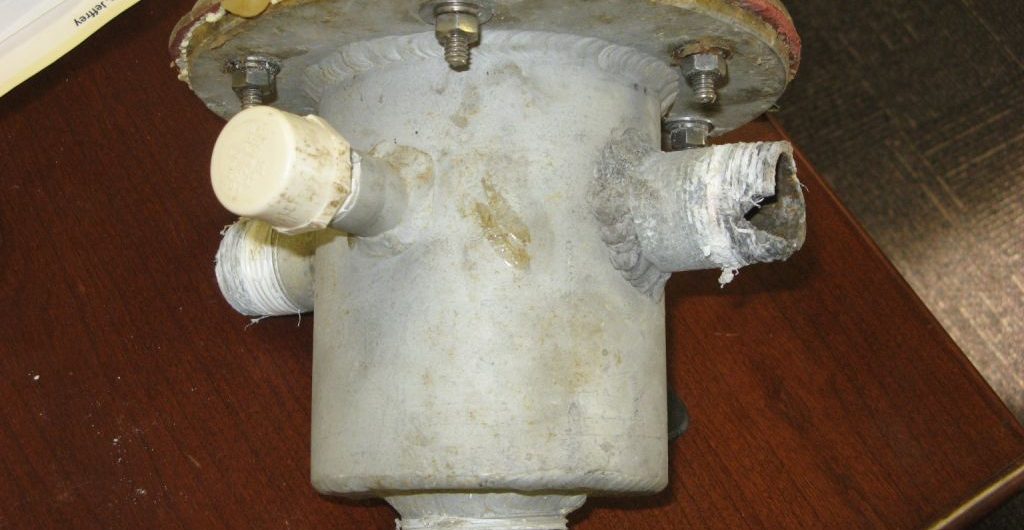 Lunacy is again spending the winter inside at Maine Yacht Center, and though there are no ambitious modifications underway, like last year’s bowsprit, I have been trying to address some smaller issues that have been bugging me. Number one on this list was the big Marelon seacock on the boat’s one and only raw-water inlet, which feeds the toilet, washdown pump, and auxiliary engine. I’ve been worried about this seacock failing someday, ever since a sister seacock, on the galley sink outlet, started weeping steadily and had to be replaced a few years ago.

Turns out it wasn’t the seacock I should have been worried about. On removing the custom-fabricated aluminum sea chest that sits atop the seacock (so they could in turn remove the seacock), the guys at MYC found the metal in one of the chest’s male hose barbs (see above) had corroded and was breaking away.

Another thing we learned was that the chest, which has a screen inside to strain out debris, was semi-clogged with weed. Not a big deal, except it seems there’s no way to get at the weed to pick it out without first taking all the plumbing off the chest and then removing the chest from the seacock. Not a very utilitarian design. 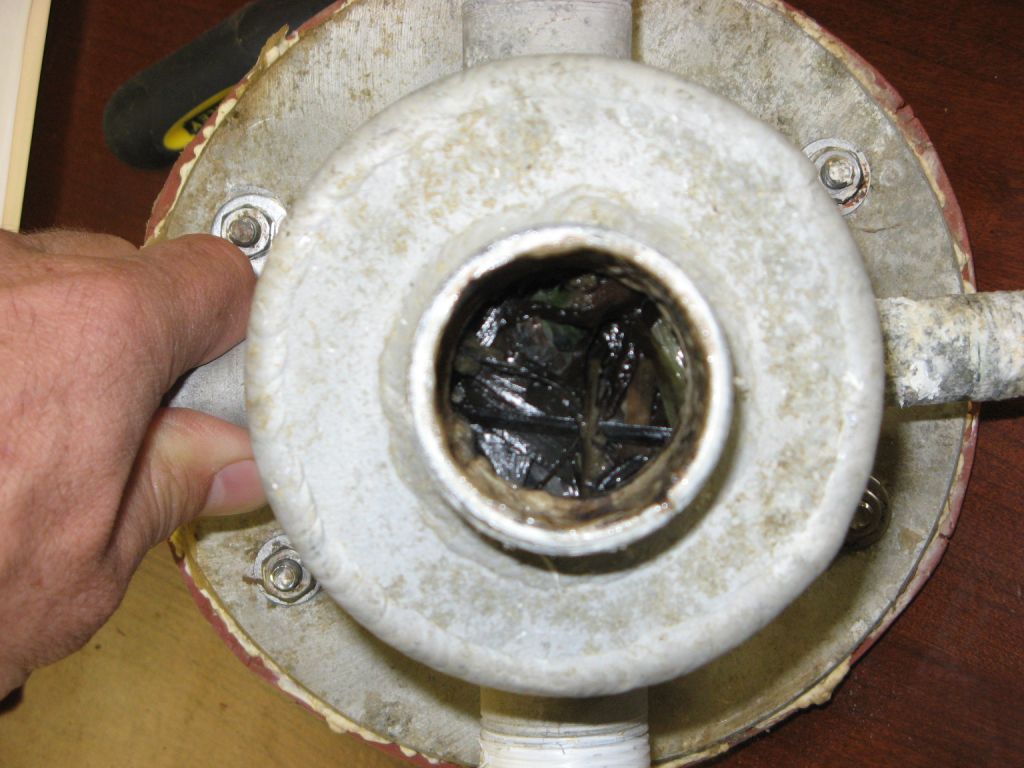 I’m a little amazed (and very grateful) that I haven’t already learned about this defect the hard way: i.e., by having the engine suddenly overheat at some inopportune and potentially dangerous moment while underway.

So… the plan now is to install not only a new Marelon seacock, but also a new strainer (with an easy-to-access basket so that debris can be quickly removed without disassembling everything) and a new sea chest, all of which must somehow be plumbed on to this single bit of pipe protruding from the bottom of the boat. 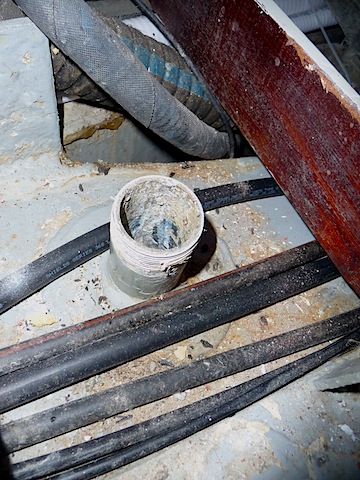 I’ll be sure to share pix of the new installation once we figure out how to put it together.

Number two on my punch list was a luxury item: new fans! Lunacy‘s old plastic fans, which were undersized and made a tremendous amount of noise, were haphazardly wired into various circuits and as a result often failed to run when asked to. 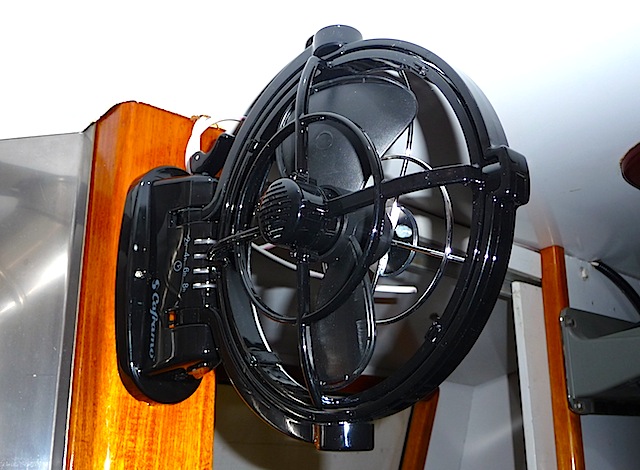 Now they’ve been replaced by these sexy Caframo Sirocco fans. These puppies are big enough to move serious amounts of air, are super-quiet, don’t draw much power, and have built-in timers so they can shut themselves off after running for a while (a nice feature when you need a bit of cool air to help you fall asleep, but don’t really want to run the fan all night). Best of all, they are now all properly wired together on their own dedicated circuit.

Note: the fan pictured above is actually the most important one on the boat. It’s mounted over the propane cabin heater (which is mounted aft, near the companionway) and blows warm air forward into the boat when the heater is running.

Another item that has been addressed is the fill for the auxiliary fuel tank in the keel. This is located in a bilge sump under the prop shaft. To open the tank, it used to be I had to first grab a small box wrench to remove the vent hose from the top of the fill cap, then grab a pipe wrench to wrestle the cap off, which was always overtightened a bit so the vent connection was lined up properly to receive the hose. In wrestling with the cap, I invariably would whack the PSS shaft seal on the prop shaft with the wrench, displacing the face seal and thus flooding the sump with sea water. 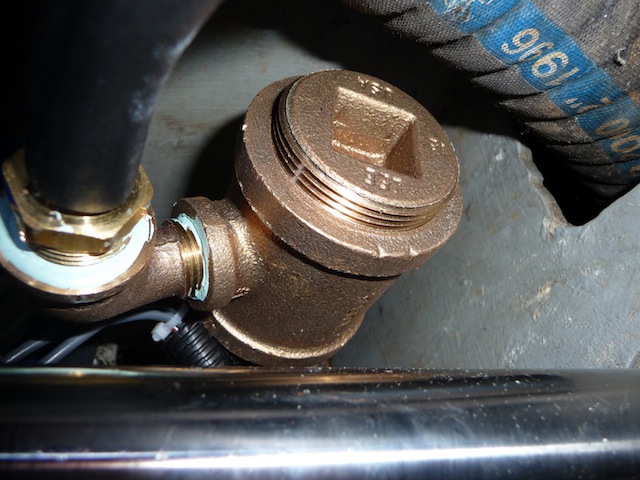 It was not an ideal arrangement. Now the fill has been modified, with a dedicated outlet for the vent hose and a discrete cap that can be more easily removed.

In addition to all of the above, we have also installed two new bilge pumps with new exhaust hoses (the old ones were leaking) PLUS a new set of golf-cart batteries to service house loads and a new engine-cranking battery.

With the exception of the new seacock/sea-chest installation, all this work is complete, so I am (once again) entertaining fervent hopes that I’ll succeed in getting the boat launched early this spring. I strive for this every year, of course, and invariably some last-minute crisis prevents it, but–call me crazy–this time I think it might actually happen. I have a vision in my head: of sailing the boat on a cool day in May, anchoring out for the night, and running the heater and my new Caframo fan to keep me nice and toasty down below.