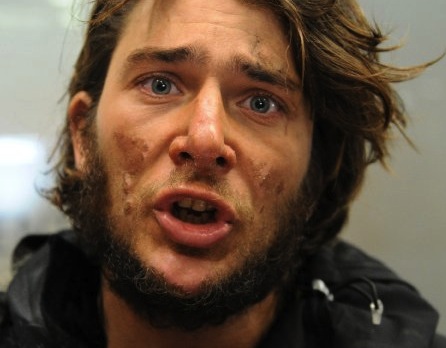 Norwegian Jarle Andhoey and his crew aboard the outlaw vessel Nilaya have announced they are leaving Antarctic waters and are sailing north again, reportedly for South America. To escape the area they evidently must first transit a 200-mile belt of sea ice. The Maori political activist, Busby Noble, who is aboard without a passport (accidentally or not, depending on which reports you read), has told the media he now plans to get a temporary passport in Argentina so he can return to his home in New Zealand.

All in all, this seems in the end to be a case of much ado about not much. When he set out last month on his unauthorized voyage south, Jarle originally claimed he wanted to investigate the disappearance of his last boat, Berserk, which was lost outside McMurdo Sound with three crew last February while Jarle was trying to drive to the South Pole on an ATV. He also made some noises about trying to drive to the pole again.

Though he reportedly did succeed in conducting a Maori prayer service for his lost shipmates while in Antarctica, Jarle in fact appears to have accomplished little else. Though Nilaya was spotted at a distance from the permanent bases on McMurdo Sound, Jarle never actually put in an appearance at either McMurdo Station or Scott Base.

One McMurdo resident, who goes by the handle NAWWAL, reported on the Cruisers Forum bulletin board on February 21: Nilaya showed up Monday afternoon local time. I saw the boat heading south, about two miles north of McMurdo. It turned around and headed north as I watched. The boat is no longer in sight from town.

The staff at Scott Base, run by New Zealand, had been instructed in any event not to receive Jarle, this after Jarle continued to make assertions that Kiwi authorities were somehow responsible for the loss of Berserk. Jarle has also complained that caches he left last year in the area of Backdoor and Horseshoe Bay were missing and questioned whether personnel at the two bases had removed them.

As curious as I’ve been about how Jarle’s little escapade would play out, I can’t say now that I’m very surprised by any of this. It was absurd to think that Jarle’s “search” for his lost vessel and crew would yield any results a year after the fact. As I said in my last post, it seems instead all that’s really going on here is that Jarle is upset over the loss and needed to return to the scene to achieve some kind of closure.

It is a shame, I think, that he couldn’t have done this more gracefully.

If Jarle had sailed south without a permit, arrived at McMurdo Sound, gone ashore in one of his silly Viking hats with his Maori at his side, asked politely to meet with officials to discuss last year’s events and the disposition of the supplies he left behind, and thanked everyone for last year’s SAR effort… that would have been very cool.

Instead what we’ve been treated to is the irrational and pathetic floundering of a wounded little boy.