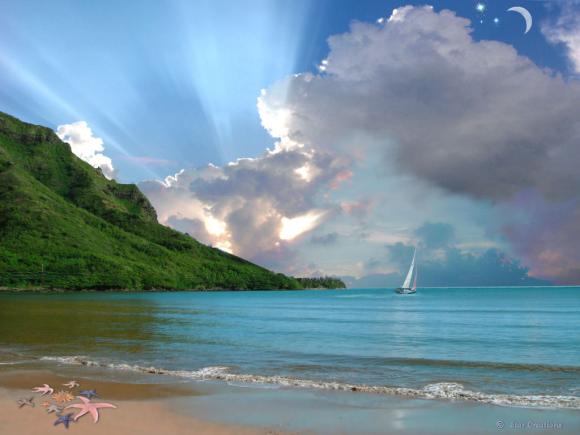 One of the most remarkable things about sailboats is their capacity to inspire us to dream. Inside every cruising sailor’s head there is a fantasy, be it of a palm-studded tropical lagoon, an antique Mediterranean harbor, some barren high-latitude fjord, or just the cove around the next headland. And all of these visions, however various, can be both personified and provoked by that most magical of objects: a boat propelled by sails.

Once lost in the anxiety of actually owning and maintaining a boat, we sometimes forget about this power they have, but fortunately reminders are often close at hand. Certain boatyards, for example, always seem to attract dreamy-eyed would-be voyagers with large ideas, small budgets, and vessels of suspect ability. To some these people may seem like prophets, to others they seem just plain crazy, but in each of them there is a kernel of desire we all share and can recognize.

There is one such yard in midcoast Maine where I once kept my boat Sophie for a while. At the back of the yard there was always a handful of bizarre project boats, each nurtured by a man with a vision. In most cases nothing ever came of these boats, and they lay idle year after year blocked up on jackstands. Occasionally their owners would appear, work on them for a day or two, and then disappear again like vampires dissolved in daylight. It seemed clear these people never expected to launch their boats. Rather, it was enough that their boat was a tangible manifestation of their dream. As long as they could lay hands on it once in a while, it didn’t matter if it never went anywhere.

But there was one man–I’ll call him Harold–who was different from the others. Ironically, his vessel was the most suspect and bizarre of all those in the yard. It was a crude dory-like thing, slab-sided and flat-bottomed, with an ungainly cabinhouse slapped on top that reached from gunwale to gunwale. Harold had designed this craft himself (making it up, I suspect, pretty much as he went along), and likewise intended to construct and finish it himself, using mostly pine two-by-fours and cheap plywood. He had an old Chevy pick-up truck and a homemade box trailer with which he hauled tools and materials to the yard. He also had a dog, a basset-beagle mix, that liked to lie under the trailer sleeping while Harold worked on his boat.

For that, in a verb, was what was different about Harold. He actually worked on his boat. Not maniacally or obsessively, but slowly and steadily like a marathon runner, with his eye ever on a distant finish line. His ambition–the great dream that motivated him–was in fact very modest. Once he completed his boat he wanted to sail it down to Portland and live on it in a marina with his girlfriend. Then, once they saved up some money, he hoped they might take a cruise down the coast around Florida to Louisiana, where he was born and raised.

During Harold’s second year in the yard our boats were blocked up next to each other, so naturally we became friendly. Subsequently my boat was laid up in the more active upper part of the yard, but still I often walked down to visit Harold and follow his progress. One of the first big milestones, I remember, was when he poured his own keel. He built himself a mold, gathered together a huge collection of stray bits of lead–old fishing sinkers, diving weights, and what-not–melted them all down with a blowtorch and so fabricated himself some ballast.

The following summer he stepped his mast. It was a short, spindly thing that looked as though it had been hewn from a sapling. I noted it leaned hard to port and was supported by three lonely, skinny wires.

“What sort of rig do you expect to fly?” I asked, hoping to inject a note of reality into the proceedings.

“It’ll be a gaff rig,” explained Harold with some gravitas. “I reckon a low-stress, low-aspect sail plan will work best on a boat like this.”

Later that same year, in mid-November, I visited again and was amazed to find that Harold had nearly finished his boat. She was all painted, rudder in place next to an outboard engine on a stern bracket, stanchions and lifelines installed, with her feeble crooked mast poking skyward and her slightly crooked keel prodding downward. I was even more amazed when Harold announced the boat was to be launched the following morning. Down below both he and his girlfriend were working madly to complete the interior. As a sure sign that their fortunes were now married to the boat, I noted the dog was asleep in the forepeak.

“We’ll be up until midnight,” conceded Harold. “But then tomorrow we’re off to Portland. We’ve reserved a berth there for the winter.”

I confess I lost sleep that night worrying over Harold’s fate. Though he proposed only to transit the coast some 60 miles from Penobscot Bay to Portland, I felt certain this must be, as the Coast Guard would put it, a manifestly unsafe voyage. I had to ask myself: should he be stopped? But even as I posed the question I knew what my answer was. I knew I, for one, wouldn’t want live in a world where people like Harold could be prevented from doing things like this.

A few days later I returned to the yard and was relieved to see Harold’s boat in its familiar spot. “He never launched?” I asked Scott, the yard manager.

It was not a pretty tale. It turned out the keel bolts on Harold’s boat, which were fastened directly to the cabin sole (for the boat had no bilges to speak of), began leaking profusely as soon as the craft was clear of the Travelift. Then, as Harold attempted to maneuver around the cove back to the lift before the boat sank, the thrust of the outboard wrenched the stern bracket loose. Even worse, in the midst of all this, Harold’s truck, which he left parked at the top of the low hill leading down to the slipway, slipped out of gear, rolled down the hill, and crashed into the water.

And so Harold’s dream lay fallow for another winter. In the late spring, however, when I again returned to the yard, I found the boat was gone. Scott explained Harold started work again as soon as the snow melted and had been one of the first in the water. Later that same summer I spied the boat from a distance in a marina berth in South Portland. By the time fall rolled around it had disappeared.

Since then I have often wondered if Harold ever made it down to Louisiana. I like to think that he did, though I am sure he must have suffered many outrageous mishaps along the way. Of such stuff is adventure made. After all, it is easy enough for those who have both resources and expertise to make their dreams come true. The most beautiful dreamers–the ones who live life to the fullest–are those who sail only on a wing and a prayer.