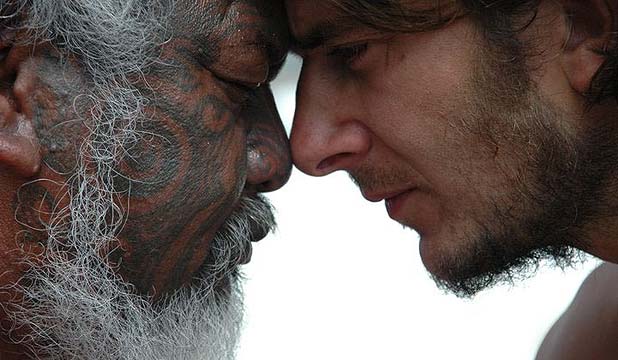 If you’ve been following the unfolding Jarle Andhoey psycho-drama, you’ll know that the Wild Viking and his crew aboard the steel sloop Nilaya are now officially in Antarctic waters south of 60 degrees and should be appearing in McMurdo Sound any day now. You may also have learned that the engimatic Kiwi crew member who “inadvertently” joined the expedition when Nilaya suddenly departed Auckland is in fact some Maori guy who weighs upwards of 300 pounds and sports copious facial tattoos. According to published reports, this Maori fellow, who worked on Andhoey’s ill-fated Berserk when she was in New Zealand last year, was a genuine stowaway who hid himself in the boat’s forepeak so he could join this year’s expedition.

Since learning these things myself, I’ve discovered a website maintained by Charlene Banks, twin sister of Leonard Banks, one of the three crew who were aboard Berserk when she was lost outside McMurdo Sound last February. Charlene recently has published an e-mail from Jarle that her brother received in Decemeber 2010 describing preparations for Berserk‘s voyage south. In this e-mail Jarle asks Leonard to “Find a boat we can sail and sink – cheap.” He also asks him to “find Maori mechanic or seaman with facetattoo.”

Another interesting source I’ve discovered is this discussion at the Cruisers Forum bulletin board. One of the participants, NAWWAL, is currently at McMurdo Station (and was at McMurdo last year when Berserk was lost). He reports that a channel has been cut through the sea ice outside the sound and that he expects Nilaya will be able to get through it.

He also reports that the ATVs Jarle left behind last year have been shipped back to New Zealand and that Jarle presumably is aware of this.

Jarle, meanwhile, in his ongoing sat-phone conversations with Norwegian media, continues to suggest that parties other than himself are somehow culpable for Berserk‘s loss. He has previously asserted that a Kiwi naval vessel ordered Berserk out of a secure anchorage prior to the storm. More recently he has suggested that the Kiwis failed to conduct an adequate search for Berserk.

Finally, we should note that elements of the Norwegian press, in covering all this, evidently have hailed Jarle as a “sex god” who figures prominently in the wet dreams of Norwegian females. Also, a Kiwi TV crew has been dispatched to Antarctica to follow his exploits.

All of which raises some interesting questions:

1. Who is this tattooed Maori and why did he stow away on Nilaya? Presumably he was originally enlisted by Leonard Banks to work on Berserk after Leonard received Jarle’s December 2010 e-mail, but why was Jarle intent on locating a tattooed Maori in the first place?

2. Why was Jarle attempting to purchase or rent a boat that he could “sail and sink” prior to setting out for Antarctica last year? Did he originally intend to take two boats south and sink one before returning?

3. Why has Jarle suggested to the Norwegian press that he might again attempt to reach the South Pole when he should be aware that the ATVs he needs to do this are no longer at McMurdo Sound?

4. What does Jarle really hope to accomplish by returning to McMurdo Sound this year?

I will not hazard even speculative answers to the first three questions. But I will say this about number 4: my sense is that Jarle is genuinely upset about the loss of his three crew members last year and feels a primal urge to return to the scene. To pay homage, to figure out what happened, whatever… he needs to go there. Unfortunately, this is all mixed up with another primal urge, to attract attention to himself, that the Norwegian media is all too willing to satiate.

As to Jarle’s accusations against the Kiwis, I suspect they are born of an unwillingness on Jarle’s part to accept any responsibility himself for what happened and/or are simply calculated to generate headlines.

The Kiwis conducted a full seven-day search for Berserk using three vessels and a helicopter, at the southernmost limit of their jurisdiction, as is documented here. Jarle should be nothing but grateful for this. In that Berserk‘s presence in the area was entirely unauthorized, he should also be grateful he wasn’t asked to pay for the search.

Also, regardless of whether HMNZS Wellington advised or ordered Berserk to leave her anchorage before the storm, or whether she simply supplied a weather forecast (as stated in this official report here), it is not true that the anchorage in question was secure. The most likely scenario is that Berserk left her anchorage at Backdoor Bay–because it is open to the south, and the forecast was for intense southerly wind–and was trying to move to nearby Horseshoe Bay when she was lost.

I’m still curious to see how this plays out and look forward to someday maybe finding answers to my first three questions. But I will hazard a guess as to what will happen if and when Jarle gets to where he is going: he will make a video about how bad he feels about his three dead friends. And, presumably, Norwegian women everywhere will love him for it.

As a teaser to that yet-to-be-produced video, I’ll share this one, which documents Jarle’s farewell to Berserk‘s crew last year prior to his setting out for the pole by ATV:

And this one, which documents the crew of the vessel Steve Irwin recovering Berserk‘s liferaft (the money shots start at 1:07):

UPDATE (Sunday, Feb. 12): This just in… turns out the Maori aboard Nilaya is Busby Noble, age 53, from South Auckland, a political activist and member of the Maori Mana Party. He and the crew of Nilaya have now reportedly landed in Antarctica, and Noble has planted a Mana Party flag and has said a prayer for the lost crew of Berserk.

ANOTHER UPDATE: (Thursday, March 8): Since first posting this, I’ve studied another seemingly reputable source–the South Pole News, no less–that states that Berserk was already anchored at Horseshoe Bay when the storm hit last February. This would explain Jarle’s assertion/belief that the vessel left a “secure” anchorage before she was lost. It is arguable, however, whether Horseshoe Bay, though it is not open to the south, is (or was) really secure. The bay is reportedly quite deep (as the chart above suggests) and is also raked by katabatic winds. If Berserk was anchored here, she might easily have dragged her anchor (or anchors) as the storm got going, and/or the crew might have decided they had to take their chances in open water.

My earlier assertion (above) that Berserk was instead anchored in Backdoor Bay was based on the official incident report (also cited above).