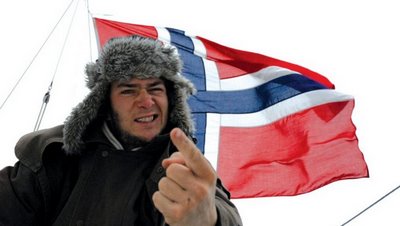 I confess I am now officially obsessed with the “Wild Viking,” Norwegian Jarle Andhoey, and his latest unauthorized voyage to Antarctica. In case you haven’t been checking the news online every few hours like I have, let me bring you up to date:

1. Andhoey is questioning whether New Zealand’s navy is culpable in the loss of his previous boat, Berserk, which disappeared with three crew aboard during a storm in the Ross Sea last February while Andhoey and another crew member were attempting to reach the South Pole on ATV bikes. Andhoey, who has been communicating regularly with media outlets in Norway since leaving Auckland, New Zealand, last week, believes that a Kiwi naval vessel, HMNZS Wellington, may have ordered Berserk and her crew to leave a secure mooring in McMurdo Sound just one day prior to her being sunk in a storm in open water.

The New Zealand navy denies this is true, but admits the Wellington was in radio contact with Berserk the day before she was lost. The purpose of the communication, asserts the navy, was solely to advise Berserk‘s crew of the imminent storm.

The stated purpose of Andhoey’s present voyage is to investigate the loss of Berserk. Evidently, he also hopes to make another attempt to reach the pole on the ATVs he left at McMurdo Sound last year. Currently, however, McMurdo Sound is not accessible by boat, as it has been blocked off by a bridge of sea ice. It has been reported Andhoey is now bound for Victoria Land, on the western Ross Sea north of McMurdo Sound, and will review the situation once there.

2. An un-named Kiwi tradesman who was working on Andhoey’s boat was “inadvertently” taken along on the voyage when Andhoey suddenly left Auckland last week. It is not clear why Andhoey left so abruptly, though it is clear he left one day after being served with a deportation order by Kiwi authorities. Andhoey received this order because he failed to declare he had previously been deported from Canada when entering New Zealand in early January. The order was not final, and he had almost a month in which to appeal it.

The status of Andhoey’s inadvertent crew member is uncertain. It is known he has no passport or other papers with him, but it seems he is not currently on the boat against his will. Kiwi authorities have discussed the matter with the man’s family, who evidently have communicated with the “stowaway.” The authorities have stated they have no intention of tracking the boat down to “rescue” the man, and his family has not requested that they do so.

3. Andhoey has stated to Norwegian media that there is no EPIRB aboard the boat.

4. Andhoey’s current vessel, Nilaya, a 54-foot steel sloop, was purchased in New Zealand in early December from one Doug Easton, who has stated he was not certain who bought the boat and did not know what the buyer intended to do with it. Easton has declined to comment on the condition of the boat and whether it is suitable for a voyage to Antarctica. Evidently the buyer was not Andhoey himself, as (again) he did not enter New Zealand until early January.

Andhoey, meanwhile, has stated the vessel is now registered in Russia, that the skipper is Russian, and that the Russian government, a party to the Antarctica Treaty, has authorized his voyage. Reportedly, there are five people aboard: Andhoey, Samuel Massie (who joined Andhoey in his bid to reach the pole last year), the mysterious Russian skipper, another unidentified crew member (who may be a photographer), and the Kiwi stowaway.

COMMENTARY: Predictably enough, there’s been a fair bit of tut-tutting about how irresponsible Andhoey is. Meanwhile, in Norway at least, he’s also being hailed by many as an anti-authoritarian Hero of the Free Spirit.

It is worth noting that, even prior to this latest escapade, Andhoey has enjoyed at least minor celebrity status in Norway. Norway’s NRK public broadcasting service has aired television shows about his past exploits and apparently one purpose of this current voyage is to film a documentary about the loss of Berserk and its crew. It is hard to believe that Andhoey is not motivated, at least in part, by a desire to focus attention on himself. I doubt, too, that it is merely a coincidence that last year was the 100th anniversary of Roald Amundsen’s famous expedition to the South Pole. Amundsen (the first to ever reach the pole) is a huge national hero in Norway and was also known to crave public acclaim.

I’ve been aware of Andhoey ever since I read a book entitled Berserk: My Voyage to the Antarctic in a Twenty-Seven-Foot Sailboat that was published back in 2004. Written by an American, David Mercy, a young film-maker from Los Angeles who sailed with Andhoey on his first voyage to Antarctica in 1998 aboard an Albin Vega, the book portrays Andhoey as a passionate, extremely competent seaman with an erratic, volatile personality. The voyage in itself was quite remarkable, in that the boat was unheated, effectively had no engine, and also had no head aboard.

Mercy joined Andhoey again in 2002 aboard another Vega (the first was lost) in an effort to sail as far north into the Arctic as possible, and also in 2007, aboard a larger steel boat, on a voyage through the Northwest Passage. Both these journeys provoked various fines and arrests (and a deportation for Andhoey) from the Norwegian and Canadian governments.

The video below will give you a good sense of what sailing with Andhoey is like. It seems to involve much wearing of plastic Viking helmets and absurd frat-boy behavior calculated to annoy large mammals. The footage at 3:30, where an irate walrus attacks and punctures the crew’s rubber dinghy as they attempt to film the walrus underwater, is particularly impressive.

As irresponsible as Andhoey seems, I personally am not willing at this point to condemn him. Underneath his antic juvenile veneer there seems to beat the heart of a true sailor and adventurer. I respect his desire to find out what happened to his boat and crew (though I doubt this voyage will lead to him learning anything), and I especially respect his decision not to carry an EPIRB. There’s no way he should be calling for help if he gets in trouble doing crazy stuff like this (though we should note that Berserk was carrying an EPIRB when she was lost last year and that much money was spent looking for her).

As to the “stowaway” aboard, I simply don’t know enough to have an opinion. Having read Mercy’s book, I’d guess it was Andhoey’s impatience that led to the imbroglio. He seems to be the sort of skipper who, once he decides to leave a place, wants to leave very immediately. If the stowaway has indeed consented to stay aboard and is now a willing member of the crew, I do hope he has been informed about the lack of an EPIRB and what that means.

Mostly, I’m just very curious to see how all this plays out. If I have any moralizing to do, it can wait until the story’s over.