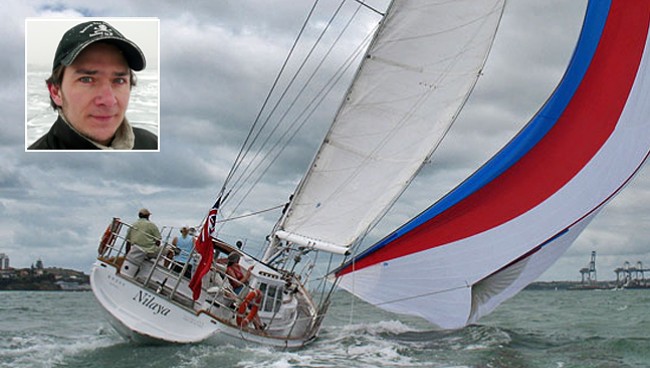 The fanatic “Viking” sailor who lost his steel yacht Berserk and the lives of three crew members last February in a failed attempt to reach the South Pole by ATV is returning to the scene of the crime. Norwegian adventurer Jarle Andhoey, age 34, has obtained a new yacht, Nilaya, a 54-foot Kiwi-built steel sloop, and set out from New Zealand earlier this week for Antarctica, in spite of the fact that he (again) has no permits to travel there. Kiwi authorities launched an air/sea search for the vessel and reportedly located it yesterday, but could not detain it as it was already in international waters. Those aboard did not respond to radio calls.

Andhoey has made it clear he plans to search for the remains of his old boat Berserk, which was lost in McMurdo Sound in a fierce storm shortly after he and Samuel Massie left the boat to try to reach the South Pole on a pair of four-wheeled ATV bikes. All three crew who stayed with the boat–Robert Skaane, Tom Bellika, and Leonard Banks–to await the shore party’s return were also lost in the storm, said to be one of the worst in Antarctica in 20 years.

Samuel Massie, age 19, is believed to be sailing with Andhoey again on this trip. Andhoey has also stated that he intends to try again to reach the pole on the same bikes he left behind at McMurdo Sound last year.

Andhoey’s current vessel, Nilaya, was previously listed for sale in New Zealand for $345,000 NZ and is believed to be in good condition. It is likely she has been rechristened Berserk, which is what Andhoey has named all his vessels, starting with a 27-foot Albin Vega he sailed to Antarctica during the 1990s.

It is worth noting that evidently the only legal sanction Andhoey suffered for engaging on his tragic illegal expedition to Antarctica last year was a $5000 fine imposed by the Norwegian government. If this is true, it is little wonder he has again ignored the law this year.

You can watch a good Kiwi TV report, which includes comments from the families of the crew lost last year, at this link here.