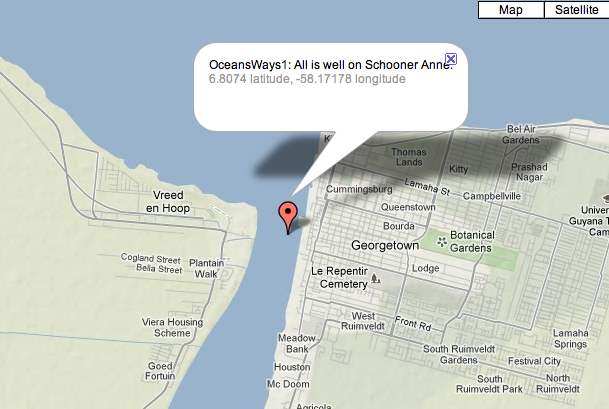 For a while I was thinking that Reid Stowe and Laura Dekker might actually bump into each other somewhere off the northeast coast of South America. But no–in spite of her slow rate of speed, Reid’s schooner Anne managed to make landfall in Guyana earlier this week (January 9) and is now tied up in Georgetown, where apparently a figurehead on her bow poked out a window on a local pilot boat.

Judging from the reports on Reid’s website, the latter part of Anne‘s voyage south went smoothly, though it seems she suffered from persistent leaks and the crew (including Reid’s 3-year-old son Darshen) had to do a fair bit of pumping to keep up with them.

Meanwhile, it looks like teen circumnavigator Laura Dekker on her boat Guppy has busted out of the equatorial doldrums and is now loping along the shoulder of South America toward the inevitable media tornado that awaits her when she lands in St. Maarten to claim the unofficial title of youngest ever to sail around the world alone. 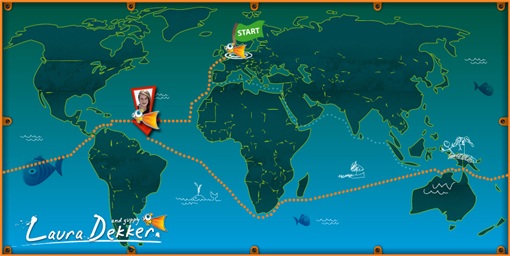 Already there’s a fair bit of buzz swirling about her. Recent reports have it that Dekker’s dad was summonsed to appear before Dutch officials to answer questions about Laura’s home-schooling habits and that Laura is ready to renounce her Dutch citizenship and sail off to New Zealand (her other putative home) after she completes her voyage.

What’s seems ironic to me is that Dekker sincerely seems to resent all the publicity she’s attracted (starting with when the Dutch government prohibited her from sailing in the first place), while Reid Stowe positively craves publicity and can never get enough of it. Having known Reid for a while, I’ve often thought people would pay more attention to him if only he’d stop caring so much about how much attention people are paying to him.

Or he could dial in the Way Back Machine and become a teenager again and play the youngest circumnavigator game. (I think, actually, he would have been very good at it.)

Right now the two big questions in my mind are:

2) How long will it be before another teen sailor appears to take a swipe at Laura’s record? (Probably not very.)

I’m also kind of wondering about the pilots in Georgetown and how they feel about that window on their boat.