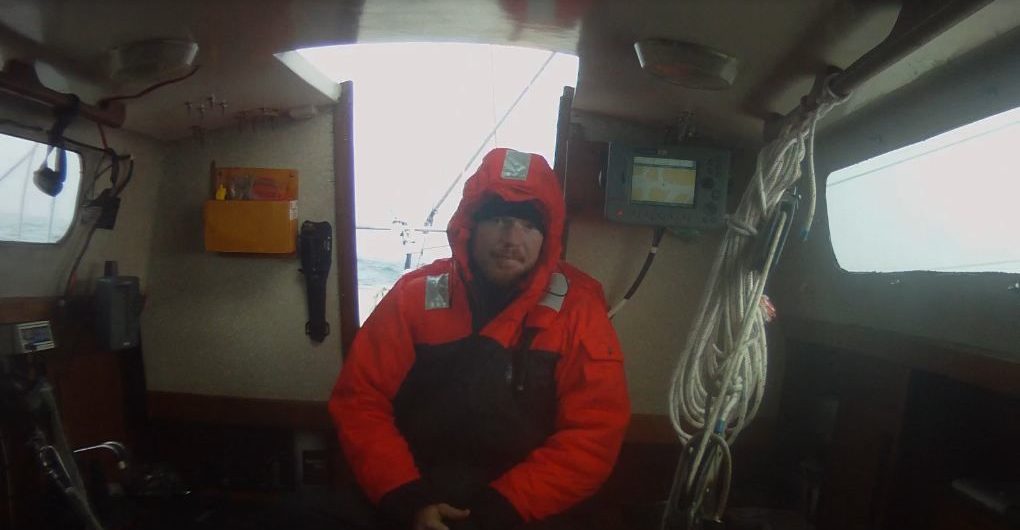 Editor’s note: Matt Rutherford, currently sailing solo non-stop around the Americas aboard a very small boat, snuck around Cape Horn this morning. Here’s an update I received from a buddy of his, Andy Schell, who maintains a blog at Father & Son Sailing.

It’s round Cape Horn we all must go, Bring ’em down;

Arms all stiff to the ice and snow, Bring ’em down;

Oh, rock and roll me over boys, Bring ’em down;

And get this damn job over boys, Bring ’em down.

Matt Rutherford finished his blog post, which he uploaded via sat phone to his website early this morning, with that bit of a shanty. He was twenty-five miles east of Cape Horn in his 27-foot Albin Vega St. Brendan. Technically, Matt has not “rounded the Horn” – he must first clear 50 degrees North for that distinction. He is still sailing in the most notorious stretch of ocean in the world – but he has finally turned north.

Matt is 208 days out of Annapolis now, approaching the final stage of his epic voyage round the Americas. He has 18,341 nautical miles – nonstop – under his keel since leaving Annapolis back in June.

“Now I can start thinking about my ultimate destination, the finish line at the mouth of the Chesapeake Bay and my first landfall in Annapolis,” he wrote. 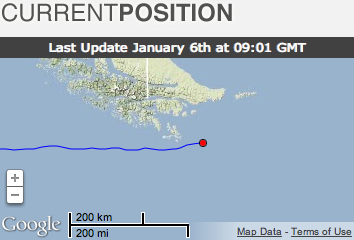 I first heard about Matt in the summer of 2009. His good friend (and biggest shoreside supporter for this voyage) Simon Edwards and I had been back and forth with one another trying to arrange some deliveries together. Simon is a professional Annapolis-based delivery skipper, and I was just getting started, looking for both writing work and sailing work. “You should write about Matt,” Simon said after one phone conversation.

By then Matt had already completed a singlehanded Atlantic circuit on his Pearson 323 and was back working with Simon doing yacht deliveries. His boat had yet to complete the circuit, though, and was sitting in the BVI following his second transatlantic crossing. He had originally sailed north from Annapolis in 2008 and followed the Great Circle Route towards Iceland. Bad weather pushed him far to the south, and without any charts Simon helped pilot him to the UK by sat phone. Matt narrowly missed the Scilly Islands – “I didn’t know they existed,” he later told me – and safely made it to the UK. He sailed to Amsterdam and points south and sailed as far up the Gambia River in West Africa as is possible before turning west again.

“There were some low-hanging wires about 200 miles inland,” he told me, “so I turned around and came back.”

When Matt finally brought the boat home, my wife Mia and I were anchored out by the Naval Academy in Annapolis. Matt rowed over in his dinghy and joined us for beers and dinner. And that’s how I met him.

As it turned out, Matt kept his boat two blocks from ours in Eastport. I often wrote about him in a local magazine. He first told me about this Americas project over a bottle of scotch one night at the little marina clubhouse at the end of Burnside Street. I have to admit I didn’t quite believe him. But he’d done before what he set out to do, so I took him seriously.

“When I was 18, I decided I was gonna do three things,” he told me. “The first was to ride a mountain bike alone through Southeast Asia. I did that. The second was to cross an ocean alone. I did that (twice). That was behind me.”

It was easier to understand this the further into the scotch we got. What made it special though was how genuine he is. The trip was for adventure, for sure. But he wanted to do it for something bigger than himself.

“The third,” he said, “was to start an organization that builds libraries in war-torn third-world countries to promote literacy.”

Matt’s third goal has since morphed into a desire to help disabled people get on the water. En route to Antigua from Africa, Matt got inspired to create a non-profit organization to do just that. When he found out about Chesapeake Region Accessible Boating (CRAB), he decided instead to volunteer for them, doing maintenance (think head repairs and bottom jobs) on the donated boats, work that no one else wanted to do, but that had to be done.

We finished the scotch, and Matt focused on a vision of actually completing this voyage. “If I pull it off, I don’t know what’s next… I guess I’d have to sail backwards to the moon or something.”

And now he’s round the Horn.

“I’m also 1,000 miles from South Georgia (Island),” he wrote this morning. “How tempting is that? In 10 days from now I could be on South Georgia, standing next to Shackleton’s grave toasting ‘the boss’ with my last glass of whiskey.” (Matt has always admired Shackleton.) “It’s a nice idea but I’ve come too far to stop now.”

Matt’s voyage started off slow, at least from the media’s perspective, and I don’t know how many people actually took him seriously. But it has gradually picked up steam, starting with some of the incredible photos of life in the Arctic that he uploaded via his sat phone. He was quickly recognized for his feats in the NW Passage and actually was interviewed on NPR by a fishing boat standing by off Alaska. And the closer he’s gotten to Cape Horn the more traffic his website has seen. As the goal is to raise money for CRAB (who actually donated the Vega to him after a member of the organization read my article about him in Annapolis), that can only be a good thing.

Matt updates his site frequently, and it’s worth a long winter afternoon with a glass of whiskey and a toast to Matt and those who came before him. Matt is a humble guy, a genuine guy, and this comes through in his writing. If anyone should succeed at what he is attempting – and he is still a hell of a long way from home – let it be Matt.