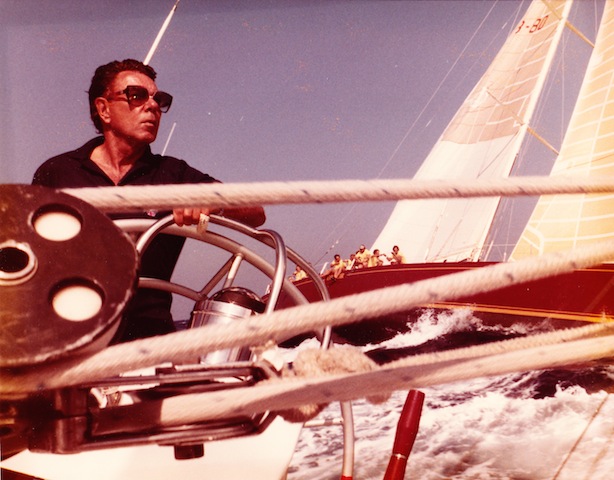 Editor’s note: This news is a month old, but I just heard it yesterday. There will be a memorial service this Saturday at 2 pm at the Kings Point Merchant Marine Academy in New York. The following obit is from Huey’s son Russell:

Sumner “Huey” Long, an international yachtsman, shipping executive, and winner of every one of the world’s most challenging and dangerous ocean races, died of lymphoma on Dec. 4, at age 90.

Ondine II was the first all-aluminum ocean racer ever built. A 57-foot yawl designed by Bill Tripp, she went on to win races against much larger opponents, sometimes due to clever innovations by Mr. Long. One of these, an ultra-heavy spinnaker, almost caused a mutiny when in a 50-knot Atlantic gale, Mr. Long fought with his crew to get it raised, earning him the title of “a modern day Captain Bligh” by Sports Illustrated. A subsequent yacht, Ondine VII was designed, somewhat ironically, by a first cousin of Che Guevara named German Frers, a renowned designer from Brazil. That yacht won the first Maxi Yacht World Championship in 1985, held at Newport, Rhode Island. In that event, Ondine VII was victorious in the first on-the-water protest hearing ever held, a practice that is now standard in world-class match racing events.

Mr. Long helped boost the careers of many aspiring world-class skippers who crewed for him, including Ted Turner, who went on to win the America’s Cup in 1977, Bill Koch, the brother of David and Charles Koch, who won the Cup in 1992, and Mr. Long’s son Russell, who, under his father’s guidance, introduced corporate sponsorship to Cup competition and became the youngest American skipper in Cup history.

Long, the son of Lithuanian immigrants, was raised in Boston, where his family started a jewelry business. He graduated from Brookline High School, received an appointment to the Annapolis Naval Academy, and after serving as acting chief officer on a merchant marine vessel in World War II, received degrees from Kings Point Merchant Marine Academy and the Massachusetts Institute of Technology. This led to a career in shipping and ultimately established Mr. Long as one of the most successful tanker brokers in the world. Among his clients and friends were Aristotle Onassis and many other prominent ship owners.

Mr. Long, who also had a reputation as something of a bon vivant, would often entertain celebrity guests on his yachts, some of whom crewed for him in major ocean races. These included HRH King Harald of Norway (who was addressed by the crew as “Harry the Hat” for the wide brims he wore to protect his pale skin), HRH King Olav of Norway, HRH Prince Albert II of Monaco, HRH King Juan Carlos of Spain, the Aga Khan, Teddy Kennedy Sr. and Jr., and beauty queens such as Miss Australia and Miss Sweden. Mr. Long’s last boat, a 105-footer named Ondine VIII, built in 1988, was considered at the time one of the world’s most elegant sailing yachts, was co-owned with Charles Evans, founder of Evans Piccone and the producer of Academy Award winning film, Tootsie.

Mr. Long is survived by his second wife of 30 years, Suzanne McDonnell Long, his sons Harry and Jack Long, and Russell Long, from his first wife, Jane Bagley Lehman.