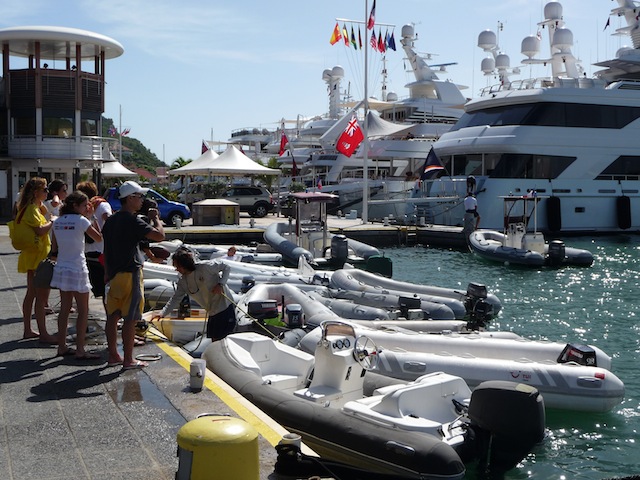 From water level it is impossible to capture with a camera the visual cornucopia that is the anchorage at Gustavia, the main town on St. Bart’s, when the New Year rolls around. Like a vast army come to camp on the outskirts of a tiny village, yachts of all description plunk down their hooks to await the turn of the calendar. A large proportion are very large yachts. Some are very, very large. At night the cumulative blaze of anchor and cabin lights, each echoed in a wavy scribble in the wake-chopped water beneath it, is like that of a city and dwarfs the wattage of the island itself.

It is possible, however, to give some sense of the scene ashore, where the waterfront is dominated by a line of mega-yachts moored stern to the quay. 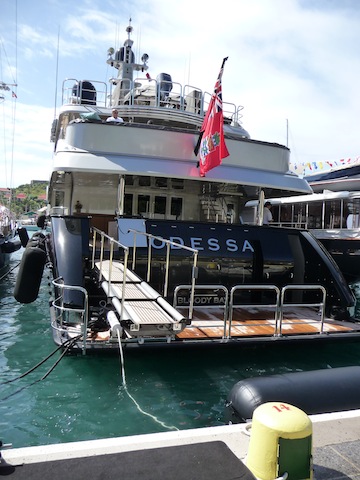 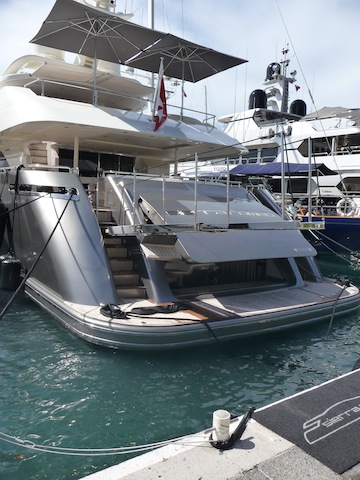 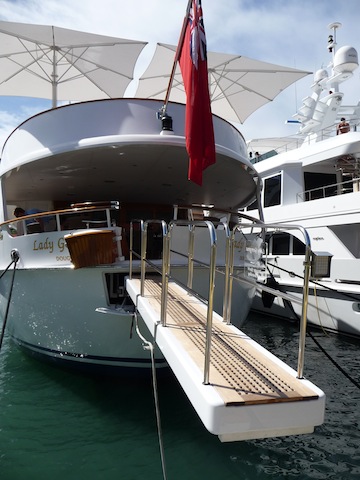 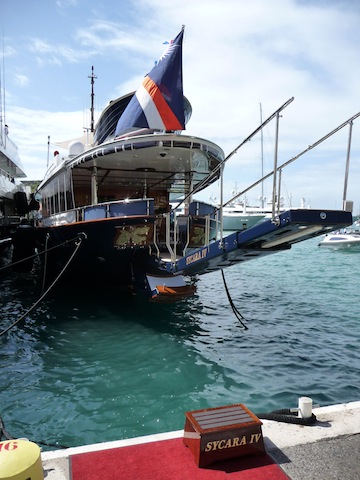 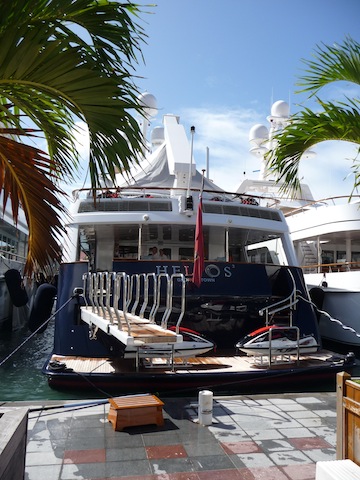 We arrived at Gustavia from Ile Fourchue on Friday, the day before New Year’s Eve, to get a taste of things. The various females aboard our Sunsail bareboat Tintamarre seemed happy to have a chance to do some power-shopping ashore. I was happy just ogling all the boats.

But I wasn’t too happy about our immediate neighbor in the anchorage, a large Lazzara motor-yacht named Le Reve. We anchored at what first seemed a reasonable distance away from her, but after watching the two boats gyrate a bit, I saw she was swinging through an unusually large arc that on occasion put her pretty close to us. I studied the pattern for half an hour, debating whether or not we should move. Finally, a crew member from Le Reve came over in a tender with a request from his skipper that we re-anchor about 50 feet to starboard.

This seemed reasonable. After all, they had anchored first, and I was already thinking we should maybe move. So I instantly and cheerfully complied with the request.

As soon as we finished moving, however, Le Reve hoisted her anchor and then re-anchored in the spot we had just vacated, putting us in exactly the same relationship we were in before.

I was astounded. I’ve anchored many different boats in many different anchorages all around the North Atlantic and Caribbean, and I’d never before seen behavior like this. I hailed the skipper and told him, as far as I was concerned, we now had precedence and that if there was any problem with how the two boats were anchored, he was the one who would have to move.

He told me, essentially, to go fuck myself.

I told him he could take it up with his insurance company, loaded my crew into our tender, and took everyone ashore to check in with immigration.

Today’s Quiz: Who is in the right here? Did Le Reve relinquish her rights of priority within the anchorage when she lifted her anchor and shifted position? Or did her being there first give her the right to nudge me aside and take my spot?

We spent one night at Gustavia, then moved to the anchorage at Anse de Columbier on the west end of the island to enjoy more solitude for New Year’s Eve. Thankfully, only a handful of boats spent the night there. I was asleep long before midnight, but crew members who stayed awake reported they had no trouble hearing the raucous clamor from town when the proverbial ball dropped.

Late the next morning, after hangovers started wearing off, a flood of boats appeared from Gustavia, looking for a scenic spot to have lunch. One of these was the gorgeous J-class yacht Hanuman. She didn’t like the look of the gathering crowd, however, and quickly bailed out and headed for the northeast corner of St. Martin instead.

After some time on the beach and lunch aboard, we hoisted anchor and sailed off in the same direction. A great rollicking reach, with winds blowing 20-29 knots and mighty tradewind waves topped with whitecaps rolling us on our beam ends.

We anchored for the night, the first of 2012, in Grand Case, my favorite spot on the island of St. Maarten/Martin. The females got to do some more power-shopping ashore. We all got to enjoy a fabulous meal.

Una counted and reports there are 35 restaurants on the short main drag behind the waterfront there. (You certainly wouldn’t guess this looking at the place from the anchorage.) About a third, I estimate, are truly world-class.

Answer to Today’s Quiz: When I returned alone to Tintamarre to fetch my wallet, which I’d forgotten, about half an hour after we first went ashore at Gustavia, I found Le Reve was once again re-anchoring, this time further away from Tintamarre. When we returned as a group a few hours later, she was gone. I took this as a moral victory and assumed this meant her skipper concluded he was in the wrong.

But then, I could be wrong about that. 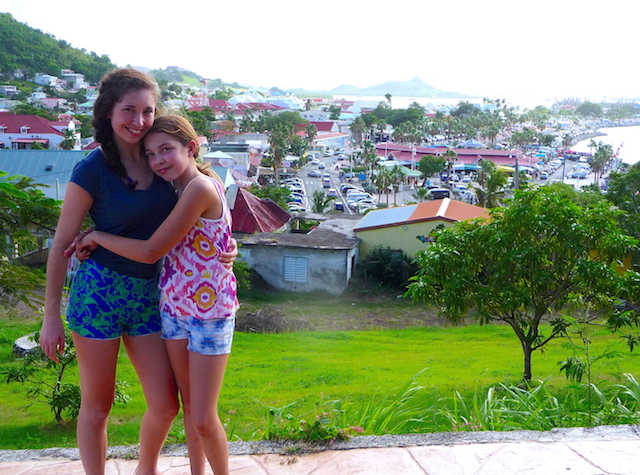