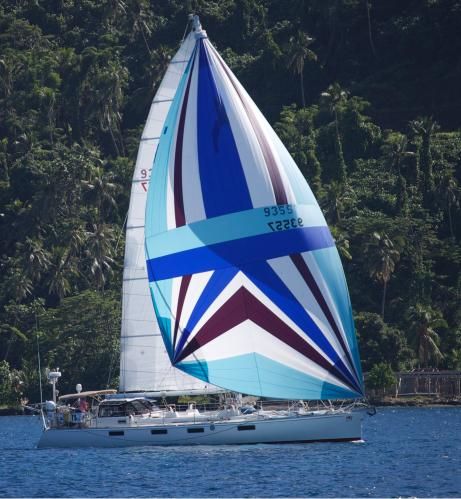 This innovative bluewater performance cruiser was one of a series of designs developed by offshore sailing guru Steve Dashew starting in 1978. Dashew’s basic concept of a long, narrow, fast boat designed to be sailed long distances by a couple first saw fruition in his Deerfoot line, which he built in fiberglass and in aluminum on a sporadic basis at several locations. The Sundeer line was more refined and focused and consisted of three boats–the Sundeer 64, 60, and 56. These were the only Dashew designs ever built on a true production basis.

The ketch-rigged Sundeer 64 boasted three double staterooms and was arguably larger than a couple would ever need. The cutter-rigged 60 and 56, which were absolutely identical but for an extra four feet of lazarette space tacked on to the transom of the 60, were probably truer expressions of Dashew’s original vision. In all there were 27 Sundeers built at TPI Composites from 1994-99, nine of which were Sundeer 60s. I helped deliver the last one built from Rhode Island to Florida through two February gales (including one right off Cape Hatteras) and to this day I remember it as perhaps the most impressive bluewater cruiser I’ve ever sailed.

Glancing at this boat’s numbers you should immediately note its low D/L ratio, just 80, which effectively qualifies it as an ultra-light racing machine. This is not achieved through radical construction, though the Sundeer’s hull lay-up is thoroughly modern. Both the deck and hull, above and below the waterline, consist of quadraxial and biaxial glass cloth set in vinylester resin vacuum-bagged over a balsa core using TPI’s proprietary SCRIMP resin-infusion process. Much of the weight saving is simply a result of the boat’s hull form, which maximizes waterline length and minimizes beam. The long, light hull is easily driven, as is reflected in its high nominal hull speed, but is powered by a short inboard sail plan (air draft is just 64 feet) that yields only a modest SA/D ratio.

Because the long, narrow hull has good directional stability and doesn’t need a tall rig to drive it, the keel can be kept short and shallow. This reduces wetted surface area and enhances structural integrity. For cruisers it has added benefits: the 6-foot draft allows reasonable access to shoal-water cruising grounds, and the mast just fits under most U.S. highway bridges.

Under sail the Sundeer certainly doesn’t feel like a 60-foot boat. The loads involved in hoisting, trimming, and reefing the sails are moderate enough that they can be handled without power winches. From behind the wheel, the impression is of a fast, easily managed 45-footer. The boat also has a surprisingly comfortable motion. Though the bilges are shallow, the bottom of the hull is round, and this, combined with the narrow beam, helps cushion the blows when pounding into a head sea, reduces pitching, and allows for a smoother motion generally.

The Sundeer is not as comfortable as a heavy displacement full-keel boat, but it is considerably more comfortable than most modern shallow-bilged boats. It tracks better than most other modern boats and like more full-keeled boats can be trimmed out to steer itself for a while. A Sundeer rarely sails up to its hull speed, thanks to the short rig, but much of the time it lopes along quite comfortably at 9 to 11 knots, which is fast enough to cover 200 miles a day.

The interior layout is very functional. The living space is segregated from the mechanical systems, which are all situated in an enormous aft lazarette/engine space, and from the major storage area for sails and deck gear, which is a large forepeak with lots of big canvas storage bins framed by sturdy stainless steel rails. The three areas are separated by watertight collision bulkheads.

The master stateroom is an enormous forward cabin with scads of storage and hanging space, perfect for a couple lying to a hook in a tropical anchorage. The only other stateroom is a small quarter cabin aft with two single bunk berths–perfect for a couple on passage, for a pair of children, or for putting up guests while in port. There is just one large, well-appointed head, situated aft, where it can be used comfortably at sea, plus a large, well laid out galley.

The deck plan likewise is superb. There are no less than 10 tall dorade vents to shovel fresh air below, each with sturdy granny bars that provide lots of handholds for working crew. The cockpit is laid out so the helmsman can easily reach most of the working lines and winches. Also, most Sundeers were built with functional solid doghouses to protect crew on watch. These feature full-length settees that are great for on-deck snoozing.

The basic systems layout emphasizes simplicity over complexity. You can load up on gadgets if you want, but it’s possible to live very comfortably on this boat without them. There is room for a 1,000-amp-hour DC battery bank down low in the middle of the boat where the weight helps stability, so a generator is not necessary. Also, the fresh-water tanks are enormous and the deck is configured to route all rainfall to the tank fills, so a watermaker is superfluous. The tanks are outboard on either side of the boat, with a cross-linked gravity-fed plumbing system that allows water to be transferred from one side to the other to help reduce heeling. The fuel tanks have large accessible sumps underneath and the vents are positioned as high as possible on deck, cleverly concealed inside the tops of the aft stanchion posts.

The Sundeer is filled with thoughtful little touches like this, all of them designed to make a bluewater cruiser’s life simpler and safer. Very few bluewater boats are so carefully conceived. It is a shame so few of these boats were built and that it is no longer in production. 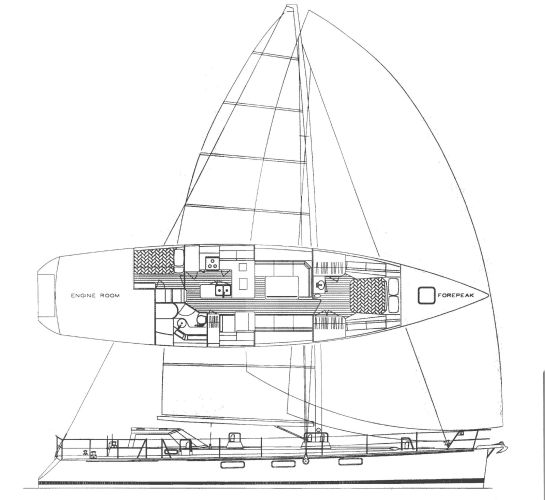