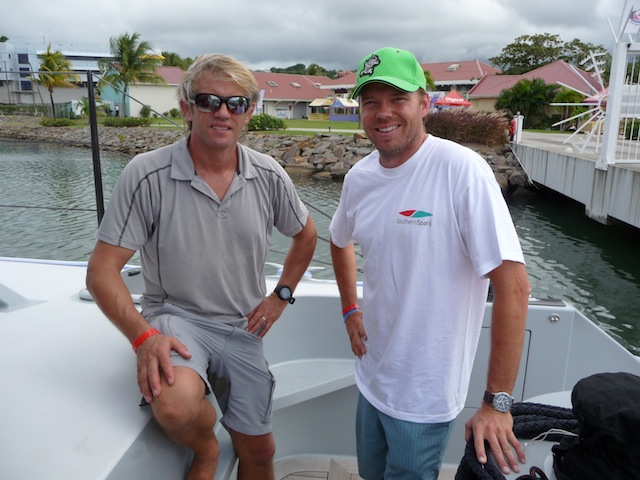 When I first stepped aboard the bright orange Gunboat 66 Phaedo while chatting up ARC sailors here in Rodney Bay, I had no idea at first who I was talking to. A soft-spoken not-quite-clean-shaven young man in a t-shirt invited me aboard after I hailed the boat from the dock, and I naturally assumed he must be crew. He eagerly pointed out the skipper (Paul Hand, on the left up top) and some of the other folks aboard, and it was only after I inquired directly as to his own identity that he admitted, a bit bashfully, that he was in fact owner of the boat.

You could have knocked me over with a feather. Lloyd Thornburg (on the right up there) certainly doesn’t look or act like someone who has just dropped what must be something north of $4 million to build the boat of his dreams. But he sure does know what to do with it. Since departing Cape Town, South Africa, where the boat was born, in November of last year, Lloyd has raced Phaedo successfully in the Caribbean circuit early this year, in the Transatlantic Race this past summer, and in the Fastnet Race, in which his photo chase boat rescued the crew of Rambler 100 after she lost her keel and capsized just past Fastnet Rock.

Learning this, you might assume Lloyd is balls-to-the-wall racing royalty, but in fact his roots in the sport are modest and decidely cruising oriented. The first boat he ever owned was a Soling (which he did not race), then he sailed a Pacific Seacraft Dana 24, followed by a Bristol Channel Cutter 28, and then a 37-foot steel Amazon, which he cruised singlehanded around the West Indies for a while.

Then came a quantum leap to a Gunboat. Lloyd doesn’t have an entirely coherent explanation of how that happened, beyond saying that he saw one and fell in love with it. If Gunboats didn’t exist and he bought a boat “off the shelf,” as he puts it, he admits it would most likely be a Hallberg Rassy, a brand he has long admired.

When he ordered Phaedo he clearly conceived of her as a cruising boat, but somewhere in there it seems he was thoroughly seduced by the aesthetic of carbon fiber and the cutting edge of modern boat construction. By the time she was finished, Phaedo was the most aggressively built Gunboat to date in terms of weight reduction, complete with a state-of-the-art distributed-power system fed by lithium batteries.

These days I’d say Lloyd is a true cruiser/racer. A veritable Carleton Mitchell for the 21st century. His eyes do light up when discussing the performance of his boat. She’ll average 300 miles a day when she’s in race mode (her best day so far has been 385), with more than 4 tons of gear and fluids left ashore, and 240 a day when she’s in cruising mode. When I asked, half in jest, whether he’d ever flown a hull on Phaedo, Lloyd immediately answered, eyes brighter than ever: “Yes, all the time. Sometimes, I swear, it feels like we get both of them out of the water.”

And, as you can see in this video here, he really isn’t kidding about that.

It seems he particularly enjoyed the Fastnet Race. He tells an amazing story about how they almost didn’t make the start. A boat struck Phaedo the day before and damaged one hull, and through a miraculous series of coincidences it was barely possible to get it repaired in time. Phaedo was third around the rock, right after Rambler, and Lloyd’s photo boat was right on the scene, waiting to snap pix, but got sidelined into rescuing people instead.

“We were just 15 minutes from retiring from the race to join the search,” explains Lloyd. “But then we got word they recovered everyone. Just think–if we hadn’t repaired our hull in time, the photo boat wouldn’t have been there, and the next boat was two hours behind us.”

Clearly, the drama of all this captivated the young man, but still there’s a big part of Lloyd that just wants to go cruising. He entered Phaedo in the cruising division of the ARC, because he wanted to use his engines when the wind got light, and because he wanted to eat some real turkey on passage for a change instead of freeze-dried food. Phaedo was third boat over the line, and might easily have been first if she’d been in race mode, but right now that doesn’t seem so important to Lloyd and his crew.

“It was a lot nicer not having to chase some Volvo 70 around a course,” he admits.

Lloyd says he’s not entirely sure whether he’ll be racing or cruising around the Caribbean this season. But talking to him yesterday, I’d say he’s leaning very strongly toward spending a lot more time in the slow lane.