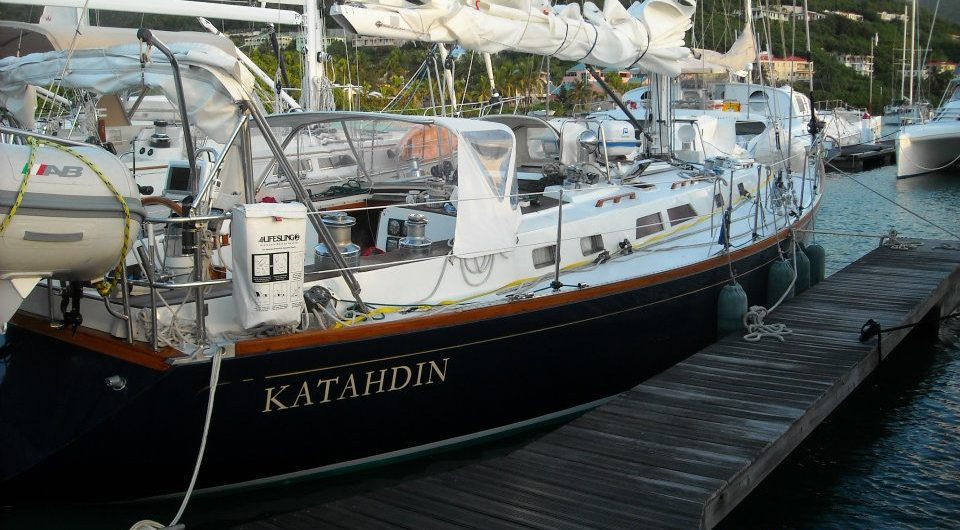 Good news: I’ve heard back from my people and can now share some pix and verbiage on how the voyage south went for Katahdin.

Rather than paraphrase, I thought I’d share the raw dispatches.

The first e-mail I received was from crew member Tom Trump (who also provided all these pix):

The Katahdin story is pretty vanilla. We had light stuff until we had motored through most of our diesel. We were actively discussing contingency plans, but picked up the trades in the nick of time. They were SE for the first 2-3 days and we were sailing just off of close-hauled, then backed to E, and we didn’t have to heel as much. Mostly 15-20, though one evening they sped up to 25 and we put a reef in the main. Saturday night (11/19) they briefly went over 25-30 in the gusts and we rigged the second reef and took a couple of good tucks in the genoa. They were back to 15-20 by morning. Cathy was a trouper, fixing up hot 3-4 course meals every night in a heeling, bouncing galley. When it was over she did say she never again wanted to do an extended offshore trip. We’ll see if that changes after a winter of living aboard.

We went across the non-existent finish line about 0250 Monday, then took our time getting to Nanny Cay in order to enter at daylight. Charlie II had to leave that afternoon, and I left Tuesday morning early. Everyone on the boat was pretty happy with the outcome, and no, I don’t think the Cloughs are pissed at you.

We had four, mostly minor gear problems, which Larry coped with well: The first was a small rip in the main after we reefed and tied off the bunt of the sail with sail stops. One cringle tore out when we jibed. Larry sewed the sail back up. Second was a noticeable clunk sound in the steering about two nights out. He and Charlie finally diagnosed an overworked hydraulic pump, which was tamed by hand steering for a while and reducing the autohelm sensitivity. Third was the boom end shackle that held the two reef lines, which came undone then pulled open. We replaced it with a spare. Fourth was the roller-furling line, which chafed through at the drum and parted about two days from Tortola. It too was replaced with a spare.  Pretty minor stuff compared to my last C1500, but our max winds this time were 30 kits briefly, and max waves were est. 9-10 feet.

SHORTLY AFTERWARDS, I received an e-mail from skipper Larry Clough:

Overall, once we finally left our pre-departure stress behind, the crossing itself was benign although longer than is typical. I believe Steve Black commented that this was the longest 1500 ever–we finished about 10 minutes behind his boat.

Although it does not make good copy, the primary problem was light winds due to a large high pressure ridge parked between Florida and Bermuda. No isobars = no wind.

As Ken at Locus Weather predicted, ultimately we had to motor for about 40 hours to get through it, although due to fuel concerns we kept the rpms down to conserve fuel–we used 70 of 90 gallons over the 11 days.

The Gulf Stream crossing was very benign for us. Our friends on Centime started, diverted into Beaufort due to autopilot issues, started out again and got so badly beaten up in the Gulf Stream that they returned for repairs. They are still in Beaufort.

The last few days were a broad reach in about 25k of wind with big swells. Living on 20 degree tilt with continual cyclical lurches gets tiresome, particularly for Cathy who was cooking. I noted that Charlie Orne, the 23 year old Maine Maritime grad we hired to replace you, spent a lot of time sleeping during that part of the voyage.

The wear on the boat caused by swells during the last part of the trip was significant. The autopilot was making thumping noises which we spend several hours trying to figure out for fear something was loose. It seemed to resolve itself once I dialed down the sensitivity the next morning, but the autopilot did fail just before we arrived in Nanny Cay. My guess is the noises were some relief valve letting go, which caused the hoses to jerk and thump. We have an appointment to visit the electronics tech next week. We also had two pairs of set screws in the new Harken furler that protruded about a 32nd of an inch that wore a hole right trough our partly furled genoa and a shackle that unscrewed itself on the reefing line but was noticed before it let go. The engine drive side of the refrigeration failed, which the tech at Nanny Cay diagnosed as blown undersized fuse on the clutch for the compressor.

The AIS stopped displaying on the Garmin chartplotter–I purchased it at Milltech Marine and installed it. It worked for three months then temporarily failed to display for a day twice coming down but then recovered. Now it only displays for about five minutes before failing. AIS significantly lowers anxiety in crossing situations with fast commercial traffic particularly at night – it is not just hype.

Our fishing was a failure.

Last but not least, the rudder fix performed flawlessly. So much agony.

The moral of the story: persistence prevails–at one point I had given up on the 1500, but kept on slogging. It is hard to believe we are finally here after 3 years of planning and re-organizing our lives for this trip.

At dinner last night at a local bar, there was a definite sense that after focusing on this goal for so long we all felt at loose ends in finally passing the finish line.