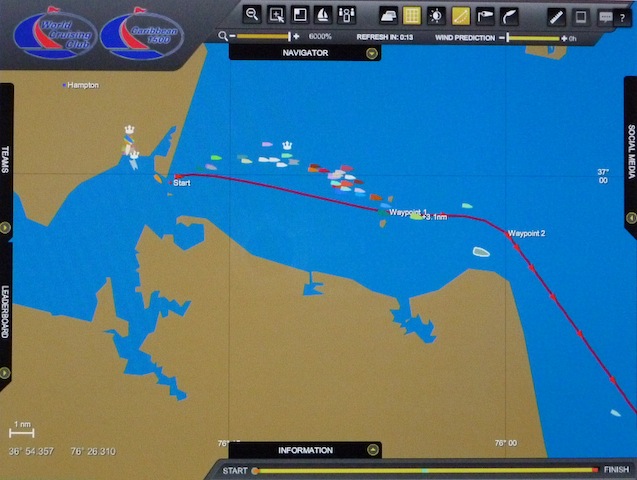 I decided I had to pull the plug on my participation in this year’s Caribbean 1500 on Wednesday afternoon after rally HQ announced they were postponing the start once again until this morning. I was reluctant to do this, but the “squash zone” between my prospective arrival time in the BVI and the Thanksgiving holiday was getting a little too tight for comfort. I flew home yesterday, and today I’m following the rally start a bit wistfully via the tracking feature on the rally website.

I felt especially bad leaving Larry and Cathy on Katahdin short one crew member on such short notice, particularly after all they’d been through getting their rudder bearing repaired in time for the start, but such are the vicissitudes of the rally game. There were several boats that had to make last-minute crew changes after Wednesday’s postponement, and there was something of scramble as skippers tried to fill holes in their rosters. Fortunately, Larry and Cathy were able to find a replacement for me.

We parted on good terms, and I look forward to seeing them next year when they return to Maine. Meanwhile, I’ve bequeathed them my new anti-seasickness goggles (endorsed by the French navy), which I had planned to try out for the comic during our passage south. Hopefully, they’ll have a chance to test them for me during their winter in the W’Indies.

The reason for the extra day’s postponement had to do, of course, with the storm named Sean, which parked for several days right on our rhumb line to Tortola. Soon after my last post it became an unambiguous tropical storm, and was even threatening to briefly achieve hurricane status when the final postponement was announced. In the end, the rally organizers decided they weren’t willing to send the fleet out in front of the cold front that was due to sweep the storm away.

One of the things everyone down in Hampton was talking about on Wednesday was the fate of another rally, the North American Rally to the Caribbean (NARC), which departed from Newport, Rhode Island, bound for Bermuda (and thence to St. Maarten) on November 1. It seemed clear from news reports online that portions of this fleet had been caught in strong weather and that at least one boat had been abandoned. Steve Black and Davis Murray were also spreading the word in Hampton that as many as three NARC boats might have been dismasted.

This morning I called Hank Schmitt, organizer of the NARC, who also sailed in the rally aboard a Swan 48, Avocation. He told me that when the rally fleet intially departed Newport, after waiting two days per the advice of Susan Genett of RealWeather, they had a good five-day forecast. He also confirmed that one boat, Elle, a 46-foot Beneteau, had been abandoned.

Though there were reports the crew called for an evacuation due to a steering failure, Hank said the owner, Foster Ashton, told him after reaching Bermuda via container ship that the steering had been repaired prior to the evacuation. Hank said as far as he knows the boat was in good condition when it was abandoned, except that the mast was damaged when the container ship, Oleander, came alongside to take the crew off. One crew member was thrown across the cockpit and suffered some cracked ribs prior to the evacuation. Another slipped overboard and spent half an hour in the water, caught between Elle and Oleander, during the evacuation, but was successfully retrieved.

Another NARC boat, Riot, also suffered a steering failure, but its young crew, led by 23-year-old Coleman Bowen, succeeded in bringing the boat to Bermuda regardless. According to Bowen: “We lost steering three times in three different ways.” Unfortunately, the boat suffered serious damage after the local pilot boat attempted to take it in tow to bring it through the cut into St. Georges Harbor. In the end, the crew brought Riot into port unassisted.

Hank denied that any NARC boats had been dismasted, though a few diverted to the U.S. East Coast and one bypassed Bermuda and is now en route to the West Indies. (You can see NARC SPOT tracks here and a partial account of the rally’s fate from its shore controller here.) One boat, he said, is currently unaccounted for. Triple Stars, an Island Packet 38 with an experienced crew but no SPOT tracker aboard, is believed to be north of Bermuda, waiting for favorable wind.

Right now the consensus among NARC boats and others in Bermuda, according to Hank, is that volunteer weather-router Herb Hilgenberg was a fount of bad advice. The boats in the NARC fleet that had the hardest time reaching Bermuda were those taking guidance from Herb, Hank told me. This includes Triple Stars, the crew of which were allegedly advised by Herb to not sail south toward Bermuda when they had the wind to do so.

“Herb really blew it this year,” said Hank. “Herb gives great weather forecasts, but I don’t think people should listen to his advice on where to go.”

I reached out to Herb for a response to this and just received the following e-mail:

I think you should talk to skippers of yachts that made the passage to Bermuda starting between November 1st and 2nd, such as Ghost Boat, White Wings, Cimmaron, Mantra, Relentless, still in Bermuda, to mention just a few, and NARC yacht ELLE which was abandoned, Boonastra and S/Y Triple Star (still in transit), of the NARC Rally.

The NARC Rally should never have started on Nov.1 to begin with, and I believe Hank Schmitt is looking for someone to take the blame for his bad decision. Ask him why NARC S/Y SONG was in severe storm condition at  33:34N/69:30W when he activated 2 EPIRBS requiring a Coast Guard C130 to head to his position. I was requested to give advice to get him out of the severe conditions which, I did. He should never have been were he was, possibly because he did not listen to my advice to others, to stay well east. I kept most yachts who I was in contact with well east and north of 36N-37N initially, with heavy weather to the south and they arrived safely in Bermuda. Some smaller yachts had to head west later to avoid T.S. Sean.

ELLE did not follow my advice and he admitted that to me in writing.

I have solid evidence to substantiate my actions and based on that, I firmly believe that Hank Schmitt should have delayed the rally altogether.

(Editor’s note: I should also mention that Hank told me that Song‘s EPIRB alert was accidental.)