I’ve never seen this before… a subtropical storm with a name. But there you have it–sub-storm Sean, reportedly packing max winds of 40-50 knots, is stalled right over the Caribbean 1500 route and is going nowhere fast.

By midday yesterday we had word aboard Katahdin that the rally start was officially postphoned until Wednesday. The skinny then was that the low squatting north of the Bahamas had a 40 percent chance of going tropical (according to the National Hurricane Center), or maybe even 50 percent (according to Jeff Masters at Weather Underground). This morning it has officially achieved ambiguous “named” status, and the latest word from rally HQ is that the start is now postphoned until 0900 Thursday.

Meanwhile, we’ve moved Katahdin from Cobb’s Marina in Little Creek in Norfolk to Sunset Marina here in Hampton, just down the road from where the bulk of the fleet is docked. 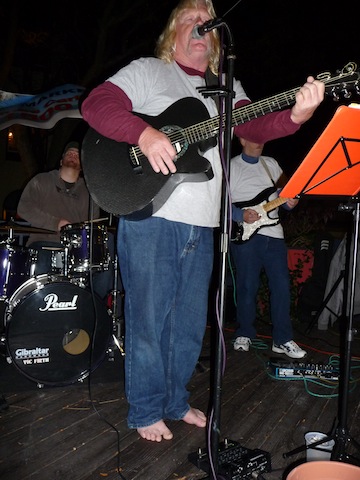 Downtown Hampton right now is awash with sailors gamming about weather and looking for something to do. Last night “Barefoot” Davis Murray put on a fine show at a nearby club, Marker 20. I also spent some time hobnobbing with the crew of Fat Cat, an 80-foot Morelli catamaran.