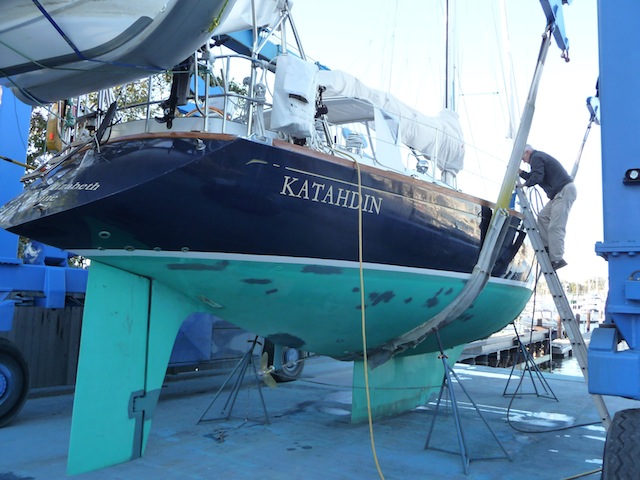 I should mention that I’m in Virginia right now, and will depart today (maybe) in this year’s Caribbean 1500 cruising rally to Tortola, BVI. I’m crewing on a Cambria 44, Katahdin, which you see here, as of yesterday evening, all ready to go. Sort of.

We launch this a.m. at 0900 and will be praying that the new rudder bearing packing gland does not leak.

Larry and Cathy Clough, Katahdin‘s owners, have been running around all over Chesapeake Bay like the proverbial headless chickens trying to cope with this rudder problem for a couple of weeks now. As of last week, they’d told me they definitely couldn’t make the start, and I organized a back-up ride on this fabulous boat, Ice Wars, a custom Fastwater 52 belonging to Gary Onik.

Then, literally, as I was on my way to the airport to fly down here, Larry calls and says he’s on again… the new gland is in and ready to go.

Another point of interest: there have been rumblings in the rally fleet among a few boats who might miss today’s start and wait a day to avoid what looks to be a lumpy wind-against-current situation in the Gulf Stream. If these boats delay, it seems Larry might wait with them, just to be sure the new gland works properly.

All of which is to say… there won’t be any new transmissions here on WaveTrain for a while.

UPDATE: I just found out, mere moments after posting this, that the rally start has officially been postphoned… one day at least. We plan to launch Katahdin shortly and will be heading over to Hampton to join the rest of the fleet.