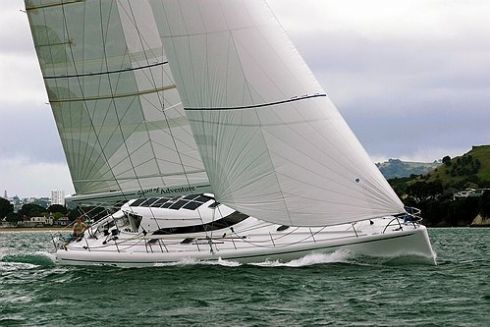 That’s right–this is a dedicated cruising boat with a canting keel. Not only that, the keel lifts, too. Not only that–this puppy’s for sale right now. All yours for just a tad over $2 million.

It is, needless to say, a quite sophisticated one-off job. The commissioning owner, a big fan of Ellen MacArthur and IMOCA Open 60 racing, initially sought to acquire an existing Open 60 and convert it to a cruising boat, but then turned to Owen Clarke Design, which had designed MacArthur’s Kingfisher, to create a new purpose-built vessel. Constructed by New Zealand-based Marten Yachts (which also built Kingfisher), Spirit of Adventure was launched in early 2004 and subsequently was actively cruised by her owner.

Spirit‘s hull form and underwater foils closely mimic those of an Open 60. Her long waterline, flat bottom, characteristic “aircraft-carrier” deck, and broad transom are married to a matched pair of high-aspect spade rudders and a long, thin strut of a canting fin keel from which depends a large lead ballast bulb. As with the most expensive, cutting-edge Open 60s, Spirit‘s extremely lightweight construction is primarily carbon fiber and epoxy vacuum-bagged and oven-cured over Nomex honeycomb coring. She also carries a pair of twin 200-gallon water-ballasting tanks aft to help control fore-and-aft trim while sailing at speed. 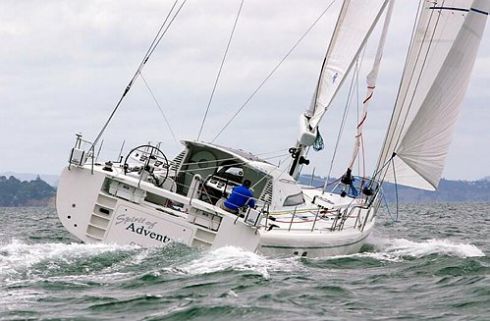 The rig, of course, is also carbon fiber. Unlike the most modern Open 60s, however, Spirit carries just one centerline daggerboard to deploy when her keel is canted (as opposed to two opposing asymmetric foils to be deployed on opposite tacks). Her standing rig, likewise, is much simpler. Instead of fiber stays and shrouds that are lashed to chainplates directly with high-modulus line and tensioned with mast-jacks, she carries conventional stainless-steel rod rigging tensioned with turnbuckles. Also she carries a fixed mast with conventional mast-based spreaders, rather than a rotating mast with super-wide deck spreaders.

Integrated into this detuned race package are a number of very cruiser-friendly features. The deck plan abaft the mast, for example, is dominated by a cabinhouse that, though it mimics the blister shape of an Open 60’s house, is much larger and contains a full deck saloon. The house also has a long overhang aft that shelters a dedicated lounging cockpit with a removable table for entertaining guests outdoors. 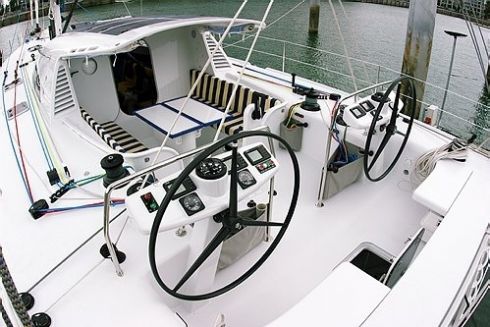 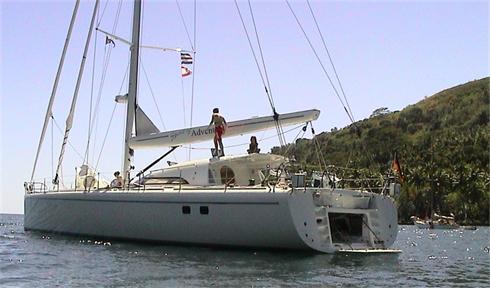 But certainly the most amazing feature is the deep-draft keel, which, as mentioned, not only cants horizontally to increase righting moment, but also can be lifted vertically so the boat can access shoal-water harbors and anchorages. The operation of this versatile appendage depends on a very large hydraulic system. There is one set of hydraulic rams to shift the keel up and down inside its casing, plus another set to cant both the casing and keel together from side to side. The 24-volt hydraulic power pack that does this heavy lifting also runs a retractable bow thruster, a windlass integrated with a retractable bow-roller system, the main halyard winch, and an in-boom mainsail furling system.

Spirit’s accommodations plan, though much more opulent than an Open 60’s, is still quite limited compared to other luxury cruisers her size. There are four watertight bulkheads and all the area forward of the third bulkhead immediately abaft the keel, which is occupied only by a small workshop, the keel’s working mechanism, and a pair of pipe berths, is left open and unfinished. The heart of the accommodations plan aft of the keel, aside from the large forward-facing nav station and the table and settees in the raised saloon area, consists of a long galley to starboard, one pilot berth and one large head with a separate shower stall and washer-drier facility to port, plus two mirror-image staterooms with gimballed Pullman double berths right aft under the cockpit.

All interior components, including the cabin sole, are cored composite structures, just like the hull and deck. The high-tech interior finish features a wealth of wood veneer and blue-lacquer trim. Other systems that help enhance life aboard include an AC generator and a watermaker. 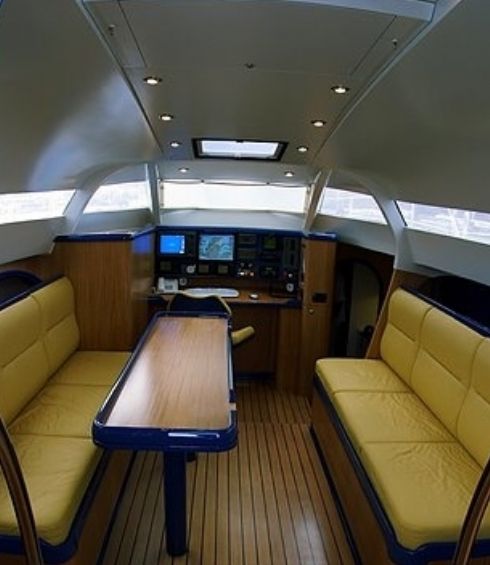 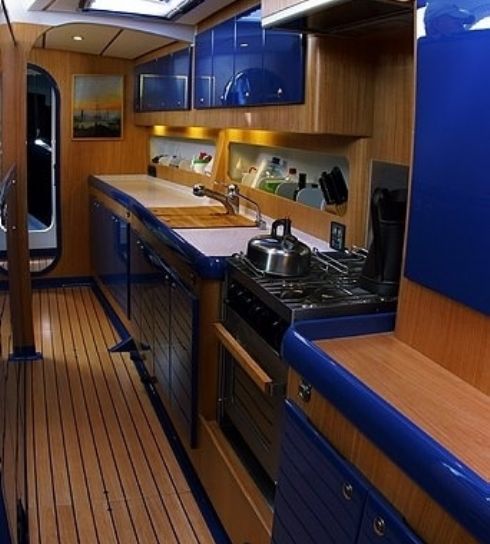 The business of actually sailing this craft, in spite of the furling mainsail and helpful hydraulics, is more intensive than on most modern cruising boats. As on a racing Open 60 there are manually operated roller-furlers for deploying the headsails (a genoa and staysail). There is also a manually driven coffee-grinder aft for trimming the various sheet winches in the working cockpit just behind the lounging pit. The steering system consists of twin wheels (as opposed to the twin tillers found on most competitive Open 60s) positioned just in front of an open transom with a clever bench seat over it that pivots out to serve as a passarelle in Med-moor situations. Under the twin helms is an enclosed transom garage big enough to house a medium-sized inflated RIB tender. There is no fixed backstay, which means the crew must carefully cast off and pick up running backstays every time the boat is tacked or jibed.

The canting keel is controlled by pushing buttons in the cockpit (the lift controls are located at the nav station to minimize confusion), but its companion daggerboard must be deployed and retracted manually with a line and tackle. There is also the water ballast to manage (this is velocity- and gravity-powered via custom Venturi scoops located under each aft cabin), as well as a manually deployed retractable carbon-fiber sprit pole from which an asymmetric spinnaker can be flown.

Stay on top of all this and there’s little doubt you can sail this boat very fast. Just check out the insanely low D/L ratio and the quite high SA/D ratio. Spirit reportedly will sail at wind speed in a breeze as low as 10 knots and will maintain the same speed with her keel fully canted (32 degrees) going to windward in 12 knots of wind. Her owner reported hitting top speeds of 16 knots running off under reduced sail in a gale during the boat’s maiden cruise. My guess is she can be pressed up to at least 18 knots no problem, even when loaded to cruise.

Whether a cruiser really wants to do this sort of thing is, of course, another matter. Though the canting keel obviously reduces heeling (and, of course, increases stability when correctly deployed), the boat’s motion is still apt to be very lively when sailing at speed, particularly while going to windward in a steep chop. Take a look at that super-low comfort ratio. Her capsize screening value is also quite high for a bluewater cruising boat. 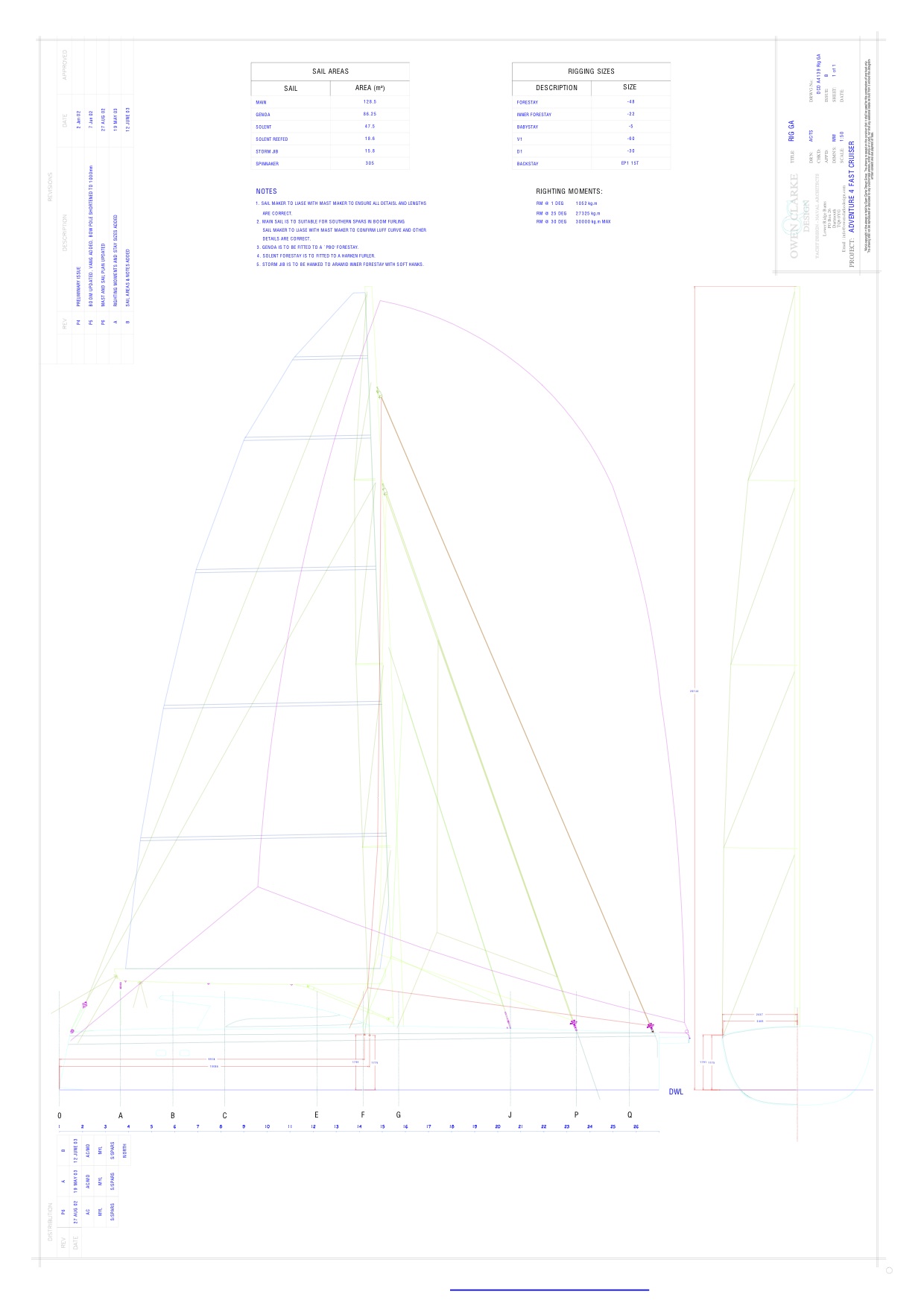 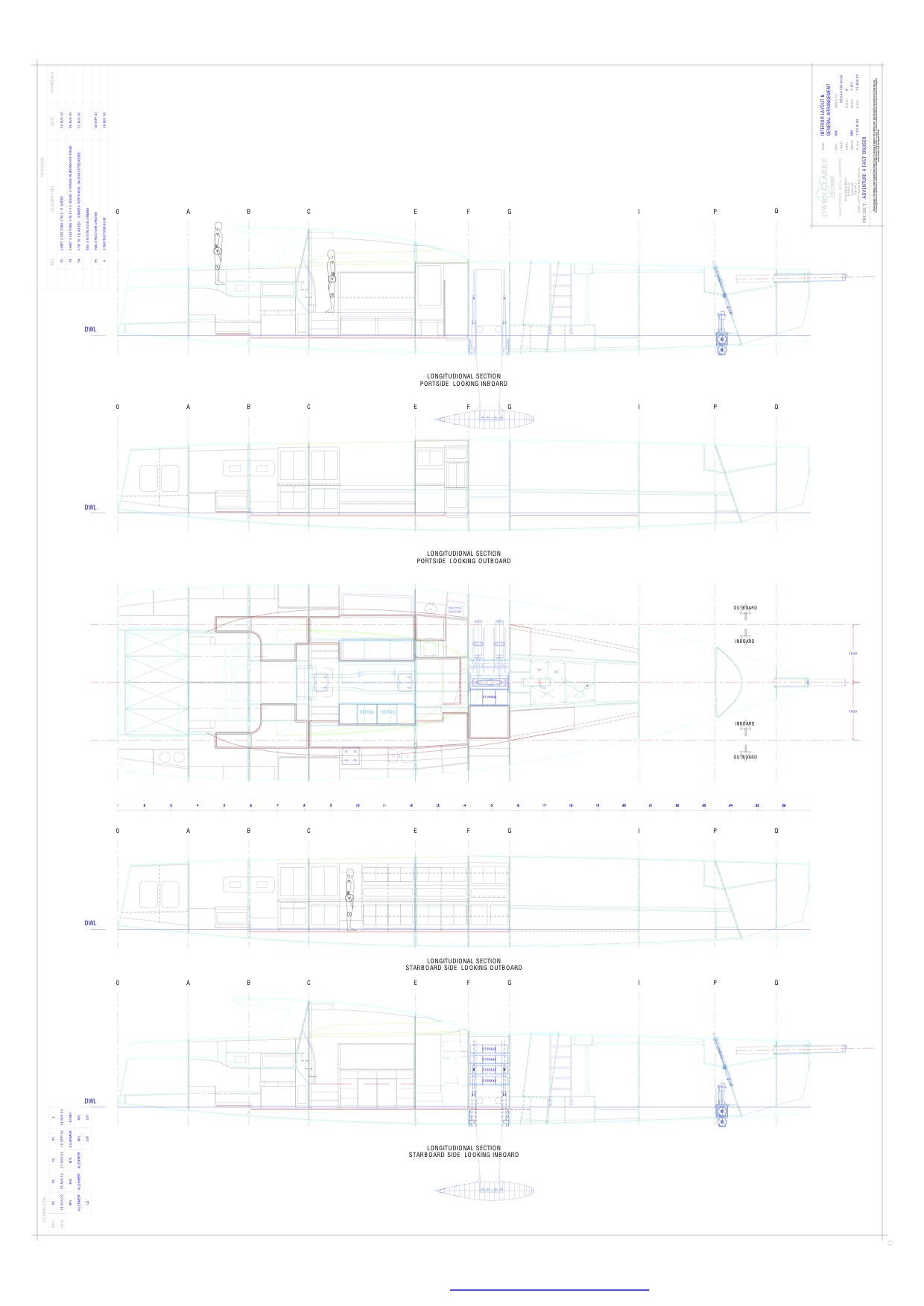 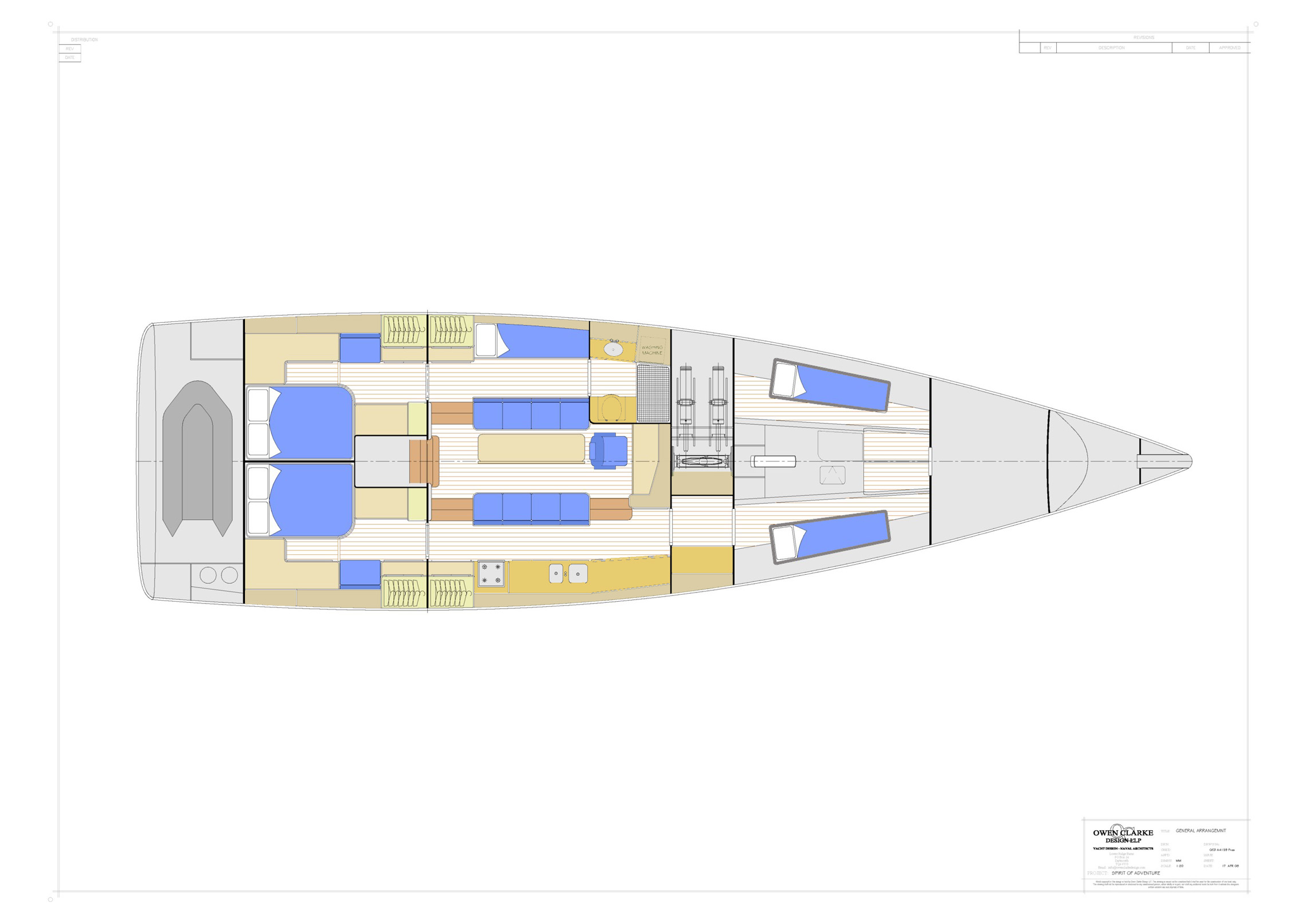 UPDATE: As of April 2013 the asking price for this boat has been reduced to $1.2 million! Act now!