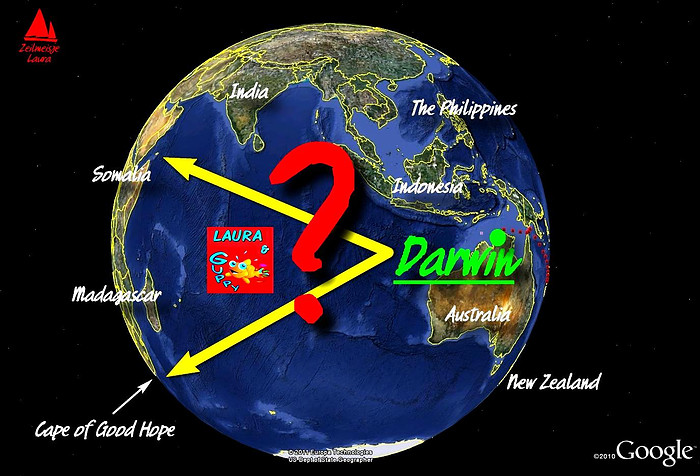 I haven’t mentioned teen sailor Laura Dekker in quite some time, because, as I expected, her voyage–a standard westabout milk-run circumnavigation–has so far been largely uneventful. But now she’s in the Indian Ocean. She left Darwin, Australia, headed west over a month ago and soon should be arriving at her destination.

Only thing is… we don’t know where that is.

On leaving Darwin, Laura refused to say where she was going, and since leaving has not posted position updates on her website. She has maintained a written blog, but publication of her posts has been intentionally delayed by several days so that her whereabouts cannot be deduced by her descriptions of weather conditions. These precautions, of course, have been prompted by the threat posed by Somali pirates, who now rule a large swath of the northwestern Indian Ocean.

Pirates and yachts have been in the news again lately, now that Paul and Rachel Chandler, the two British cruisers who were held hostage for over a year, have just published a book about their ordeal and are interviewing far and wide to promote it. Jan Quist Johansen, head of the Danish cruising family that was recently released after being held hostage in Somalia for six months, also gave an interview last week.

It is interesting to note the differences in Dekker’s approach to security as compared to Johansen’s.

In talking to the press, Johansen reportedly described his leading his family into the pirate-infested waters off the Horn of Africa as “the decision of my life that I regret the most.” He and his wife Marie now claim they decided to sail alone rather than in a convoy because they believed it was safer. (This in spite of the fact there has been no reported instance of any yacht in a convoy ever being taken by pirates.) They also assert that the positions they published during their passage on the SailBlogs website were intentionally falsified.

If this is true, I probably owe them an apology, as I criticized them a bit harshly for publishing their positions in the first place. But, I have to say, I’m not so sure it is true, and I suspect they are revising things a bit, having read some of the commentary from people like me.

If it is true (which would be easy enough to establish if one had access to their log), I also have to say it was still a very lame attempt at security. If the Johansens really wanted to make certain no one was tracking them online, it would have been much more effective to not publish anything. Or at least they might have published plots showing that they were headed for South Africa rather than straight for the Gulf of Aden. As it is, their putatively false positions as published could not have been too far off (they claim it was 300 kilometers) from their actual positions. Publishing false positions, in any event, is ill advised, as it is apt only to confuse SAR authorities if you have to call for assistance.

Another important point: what’s with their boat? It carried not only the name of one the world’s largest banks, ING, but also had the bank’s logo emblazoned on its topsides.

It’s like posting a sign on your boat: Large Ransom Guaranteed. Frankly, if I were a pirate and came across a yacht like this in my wanderings, I’d suspect it was a trap. (Maybe this, in fact, was their strategy???)

Laura Dekker, on the other hand, seems to be playing a different sort of game. By refusing to even reveal whether she is heading for the Gulf of Aden or for South Africa, she has led some to speculate that she may in fact be taking the more dangerous pirate-infested route to the northwest. Wouldn’t it make for a marvelous bit of publicity if next thing we knew she appeared at Suez, thumbing her nose at all the pirates behind her?

I am quite certain, however, she is heading for South Africa. Indeed, I won’t be surprised if she skips stopping at Mauritius en route and next appears in Port Richards or Durban. In which case, all her security precautions will have been a bit over the top. Cynics might even say she was being so secretive only to attract attention.

But I won’t say that, because I’m not a cynic.