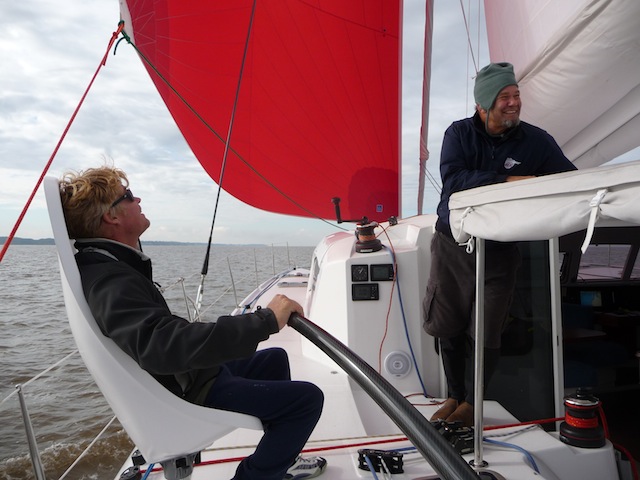 This year, for the first time, I got myself to the boat show here in Annapolis in the proper way–by boat. I only wish the entire passage down from Newport had been as a pleasant as what you see in the photo up top. Most of it instead was a mind-numbing motorsail dead to windward. But the boat, at least, was a worthy ride–an Outremer 49, a very interesting performance cruising catamaran from France.

What intrigued me most about it were the twin carbon-fiber tillers aft on each hull. I’d never steered a cat this size with a tiller before, and I was very curious to find out what it was like.

But first the ugly bit. I hooked up with the professional delivery crew–Paul “Whirly” van Dyke and Brad “Bradical” Cavanagh–at the Hinckley yard in Portsmouth, RI, about 9:30 Sunday morning. By 10:30 we’d loaded some food and gear aboard and were charging down Narragansett Bay under power. By the afternoon we were off Montauk; by midnight we were crossing the shipping channels leading into NYC.

The wind kept shifting. Whichever way we pointed our bows, that was where the wind was coming from, and by the crack of Monday morning it was blowing at least 20, with sustained gusts up to 30 knots. The seas were confused and quite steep, and we motored into them with a double-reefed main up at as narrow an angle as we could manage.

It was, in a word, ungodly. I had never before experienced such an atrocious motion while aboard a catamaran–which is saying something, as I’ve done two transatlantics on cats. The exaggerated whipsaw hobbyhorsing and frequent intermittent slamming made me painfully aware of just how light the boat is (about 21,000 lbs). Which is not a knock on this particular boat. Any catamaran will behave this way, or worse, in similar circumstances. It is exactly the sort of madness only a delivery crew will willingly endure.

By sunrise, thankfully, the wind and seas had died down. But now we were curious about our fuel supply, as our gauges were not behaving rationally. We took advantage of the calmer conditions to sound the tanks with a bit of line and a spare shackle and concluded we better put into Barnegat Inlet to top up a bit. 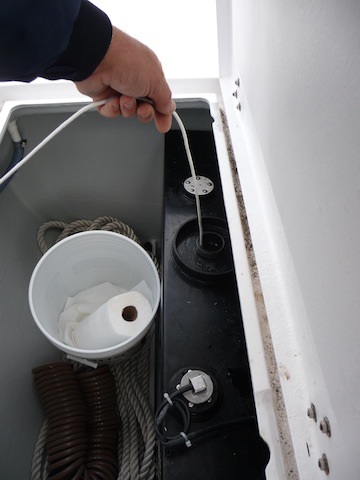 From Barnegat down to Cape May, conditions were perfectly flat, and then, perversely, the wind came up again from the north as we turned north up Delaware Bay. Fortunately, it did not blow too hard. By sunrise on Tuesday morning, we had cleared the west end of the Chesapeake and Delaware Canal, and as we turned south down the Chesapeake for Annapolis we at last had a chance to shut down the engines.

As soon as we got our fat square-headed mainsail and big red screecher hoisted, I was on the tiller with the quickness. The steering system, I found, is quite sensitive, especially considering how complex it is. In addition to the two tillers, which do not lead directly off the heads of the rudder stocks, but instead are offset and turn rods that connect to the rudders, there is also a regular wheel at a bulkhead steering station. Lying immobile at the dock in Rhode Island, I’d yanked one tiller back and forth a bit and was amazed at how little inherent friction there was. Give a tiller a push, and the other tiller, as well as the wheel, easily turn with it, offering almost no resistance. 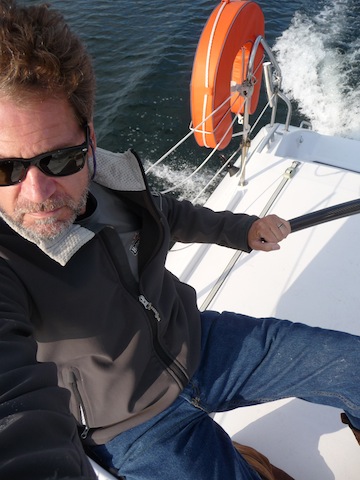 Now, with the boat flying along at 9 to 10 knots on a tight close reach in just 10 to 12 knots of apparent wind, there was plenty of resistance, but steering control was very precise. I found it took considerable effort to make large course changes, but very little effort to make the small corrections needed to keep the boat in a groove. Seated in one of the outboard George Jetson carbon-fiber steering chairs, I felt most comfortable with the tiller in one hand, palm up, feeling the helm with my fingertips and the heel of my hand. Helm feedback, for a cat, was excellent. Switching to the wheel, as expected, the feedback was less direct, but still very good for a catamaran.

There is nothing at all disappointing about the boat’s performance. She is designed to sail well–with narrow hulls, a high bridgedeck, little solid structure forward of the main crossbeam, deep daggerboards, and a rotating carbon mast–and easily lives up to her potential. We made our best speed of the entire passage during that last stretch down the bay, hitting 12 knots when the wind spiked to 16. Pressed hard in stronger conditions, I expect she could touch 20 or so.

She does well to windward, too, thanks to those daggerboards. Instead of dropping sails and motoring into the wind the last couple of miles to Annapolis, we rolled up the screecher and rolled out the solent jib. There was a small host of boats bound for the show motoring up to town, and we had no trouble short-tacking right through them. Speed was excellent–9 knots in an apparent breeze of 18 at a 25 degree apparent wind angle. All told, we found ourselves tacking through about 100 degrees or less on each cut we made. And it certainly wasn’t hard work. The jib is self-tacking (or nearly so), and all we had to do each time we came about was turn the wheel, cant the mast’s leading edge to windward, then send one man forward to kick the jib-sheet car the last 12 inches or so across its athwartship track.

Different folks have different preferences when it comes to cockpit lay-outs, particularly on catamarans, and I found the lay-out on the Outremer suited mine to a T. On cruising cats there’s a tendency to try bring as many controls as possible to one bulkhead steering station, and often this creates a confusing spaghetti of lines that splay annoyingly about the helmsman’s feet. It’s less confusing, and more realistic, IMHO, to concentrate controls in a larger area that one or two people can move about in quickly. On the Outremer, the only controls led to the helm are the main halyard, the double-ended jib sheet (the other end is at the opposite corner of the coachroof), and the mast-rotation control line (ditto). Most other lines–including the double-ended mainsheet, the daggerboard control lines, the traveler controls, and the screecher or spinnaker sheets (when they’re flying)–are led to two winch pedestals just behind the coachroof corners on the forward side of the cockpit.

The back end of the cockpit is taken up by a large bench seat and a huge folding table, where guests can congregate without disturbing the working crew. Overhead the only solid shelter is from a hard targa ramp that runs off the back of the coachroof under the boom, which allows crew to walk out and stow the mainsail in its boom bag. Canvas biminis can be deployed to shelter most of the rest of the cockpit, but the two forward corners where all the sailing is done are open, with a clear view of the rig.

The accommodations inside are neatly done. The finish is clean and elegant, a nice mix of hardwood veneer and open white surfaces, while the lay-out is fairly standard, with the saloon and galley on the bridgedeck and berths fore and aft in the hulls. There’s not as much space below as in a fat cruising cat, due to the narrow hulls and daggerboard casings, but it does not feel cramped and is perfectly comfortable. The galley, I have to say, is also a bit small. The refrigeration on our boat was glorious–two full-size front-loading Isotherm fridges, plus a freezer–but none of it was close to the stove and countertop.

These are quibbles, of course. For me the bottom line on any boat evaluation is always very simple: would I like to own one? Make that a big affirmative on the Outremer 49. I’ll take one, please. I’d love to be out there on those tillers, steering through some island-studded turquoise water. But I’m afraid I’ll have to owe you the $850,000 (base price in the U.S.) it costs to actually buy one. 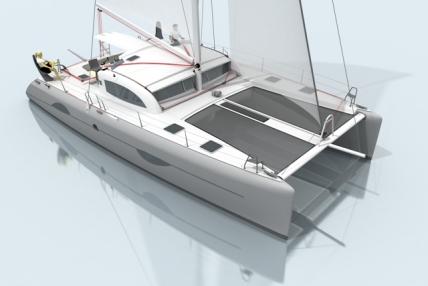 You can check out the specs here.

Stand by for more tidbits from Annapolis.