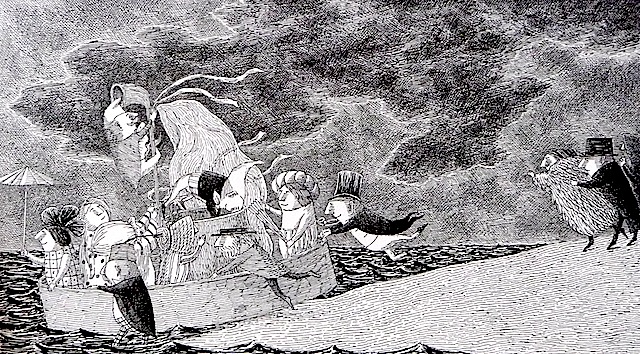 They went to sea in a Sieve, they did,

In a Sieve they went to sea:

In spite of all their friends could say,

On a winter’s morn, on a stormy day,

In a Sieve they went to sea!

–from The Jumblies, by Edward Lear/Drawing by Edward Gorey

ONE THING I’VE NEGLECTED TO MENTION is that Lunacy has been plagued with a mild leak this past summer. I’d noticed that a small amount of water was constantly appearing in the bilge sump, and just as constantly I kept mopping it out with a sponge. Gradually the small amount got larger, until I grew steadily more worried about it.

Fortunately, I stumbled upon the source. While putting the boat away after an overnight a couple of weeks ago, I noticed that the toilet’s inlet hose was weeping where it is clamped onto a sea-chest fitting atop the boat’s one and only raw-water through-hull inlet. Upon close inspection, I could see that one of the two clamps securing the hose had cut right through it.

At the time I was in a hurry, so I just loosened the clamps, pushed them out of the way, wrapped the hose with tape, then refastened the clamps on top of it. The leak stopped immediately. Then this past weekend, before heading out to cruise for a few days, I decided I better make a more permanent repair. The solution seemed obvious: pull the hose off its fitting, cut away an inch or two of the end where it was damaged, then reinstall it.

In practice it wasn’t quite that simple. First, of course, the hose refused to come off the fitting. After closing the seacock beneath it, I yanked and twisted it for all I was worth and succeeded only in making the tiny hole through which it was leaking much larger. Now I was committed, and had no choice but to cut if off with a knife.

And, of course, getting the hose back on the fitting was nearly impossible. First I tried lubricating it with dishwashing liquid. Finally, I had to resort to heat.

This is an important trick: if you submerge the end of a plastic hose in boiling water, it will temporarily get soft and fit much more easily over whatever slightly oversized fitting you are trying to wrestle it on to. In this case, it took three dunkings in the steaming cauldron I prepared before I finally got the hose back on.

After clamping it up again, I opened the seacock and found the hose was still weeping. I guessed immediately what the problem was. The fitting in question wasn’t really designed to receive a hose, but instead was threaded to receive a nut. In spite of the fact the hose was now effectively shrink-wrapped in place over the fitting, water was creeping up the threads, past the two clamps, and dripping out the end.

My solution to this problem put me right back where I started. I removed the clamps again, spooged up the end of the hose with Life Calk, wrapped it in tape, and refastened the clamps over the tape. I was relieved to see that this made the drip stop, but I didn’t feel I had accomplished very much. 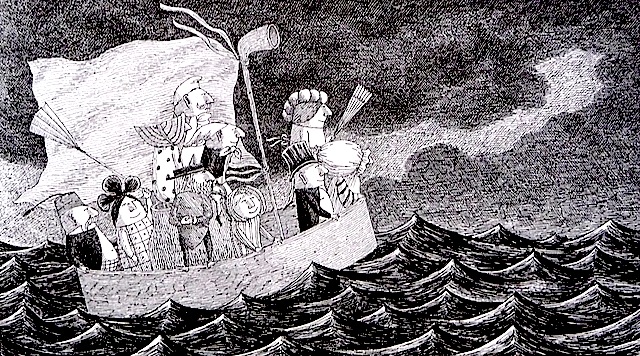 They sailed away in a Sieve, they did,

In a Sieve they sailed so fast,

With only a beautiful pea-green veil

Tied with a riband by way of a sail,

To a small tobacco-pipe mast

CHASING LEAKS ON BOATS is, of course, a time-honored obsession. There’s something inherently unsettling about having unidentified sources of moisture in your bilge, and if you own the bilge in question you can’t help but fret about it. Once you become aware of a leak, discovering and curing its cause becomes a Holy Grail of sorts.

One of my first big quests was aboard Crazy Horse, my old Alberg 35 yawl. After I started sailing her offshore, I found she had a habit of taking on large amounts of water whenever she was driven hard on the wind with her rail under for days on end. Over the next two years, though Crazy Horse was in every other respect a very dry boat, I spent hundreds of hours and thousands of dollars trying to identify and staunch the source of a leak that, in truth, rarely manifested itself and posed no real threat to my safety. In the end, I only partly succeeded. After first recaulking all of the caprail and then rebedding the entire hull/deck joint, the leak got slower, but it never disappeared entirely.

Since then I’ve learned not to worry so much about deck leaks. After all, a boat pretty much needs to be underwater in the first place if it is to be sunk by a deck leak. Still, it’s important to remember that leaks like this can sometimes be more than just annoying. I recall, for example, a Swan 48 I once delivered to the West Indies that took on water very quickly once it was heeled hard over. Because it was a modern boat with very shallow bilges, it was a) impossible to pump the water out without first stopping the boat and standing it up straight, and b) too late anyway, as the huge puddle to leeward quickly drowned all critical electronics, which unfortunately were wired up together low in the hull under the nav seat.

Another thing to bear in mind about deck leaks is they might not be deck leaks after all. The one other time I was on a boat that started leaking badly once it was heeling, it turned out the water wasn’t just seeping in through the deck joint. Instead, it was literally gushing through a through-hull fitting for a bilge-pump outlet situated just above the waterline. The outlet hose had slipped off the fitting, which had no seacock on it and had not been double-clamped–precisely because it was above the waterline. The problem was this was a small boat (about 21 feet) with way too many people aboard (about 10, half of whom were children) and waterlines are inherently variable. As it was, we were lucky to make it back to the dock before sinking. 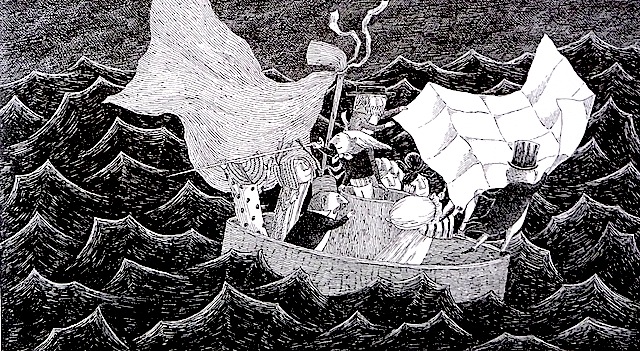 The water it soon came in, it did,

The water it soon came in;

So to keep them dry, they wrapped their feet

In a pinky paper all folded neat

And they fastened it down with a pin.

OF COURSE, THE WORST LEAKS are those below the waterline. Ironically, traditional plank-on-frame wood boats are most likely to have these, but because they have so many, owners must learn to ignore them lest they be driven mad with anxiety. Once while cruising the Bahamas, for example, I was invited to crew aboard an old wooden Bahamian racing sloop and was rather shocked to find our boat entirely submerged just off the beach on the morning of the race. The owner, however, was not at all concerned.

“Best t’ing to do before a race,” he explained. “If you sink ’em first, they don’t leak so much later.”

Even so, our boat (after we refloated it) leaked well enough during our race that we had to take turns bailing just to finish the course. Fortunately, during the last downwind leg we also jettisoned much of our ballast, which made things a bit easier.

During my other major adventure aboard a leaky wooden boat the only thing that saved us in the end was an enormous gasoline-driven “crash” pump. This took place halfway to Bermuda, so failure, as they say, was not an option. The leaking didn’t seem to be coming from any one place. Rather it was coming from everywhere all at once, and indeed once we limped back to Florida and hauled out we found half the planks on the port side of the boat were not fastened to the frame. All that was holding them in place was the cotton caulking.

“I’ll tell you what happened,” said the yard manager. “Last time this boat was refastened the crew took off for lunch and when they came back they forgot where they left off.”

Which, of course, is precisely the problem with plank-on-frame boats. With all those planks, all those seams, and all those fasteners, all it takes is a few flaws in a very large matrix and you’re sunk–literally.

When sailing in vessels like this, as we discovered firsthand, pumps are very important. Owners of wood boats in fact take the business of pumping the bilge for granted and nonchalantly track the health of their hulls by counting how many strokes a day it takes to keep everything above water. As long as the number isn’t rising, they figure all is well.

When it comes to pumps, no matter what sort of boat you sail, it’s important to remember that “bigger is better” and “the more the merrier” are definitely the mottos to live by. Most particularly, bear in mind that small boats need more not less pumping capacity, simply because they fill up with water that much faster.

My own phobia of leaks, ironically, is one of the major reasons I decided to buy Lunacy. On an aluminum boat, the hull and deck are all one piece, all hardware and appendages are welded in place, with nary a fastener penetrating the structure anywhere, so theoretically leaks should not be a problem. But still, as you see, water always finds a way in somehow.

In Lunacy‘s case, most of it, annoyingly, comes in through the engine. Since buying the boat I’ve repaired a leaking raw-water pump, a leaking freshwater pump, a leaking heat exchanger, and a leaking exhaust line. So at least his latest adventure with the toilet inlet involved a refreshing change of venue. All these leaks, fortunately, have been relatively minor. The upside to owning an aluminum boat, in the end, is that I can now bail my bilge with a sponge instead of a pump, though, believe me, I still keep plenty of the latter onboard.