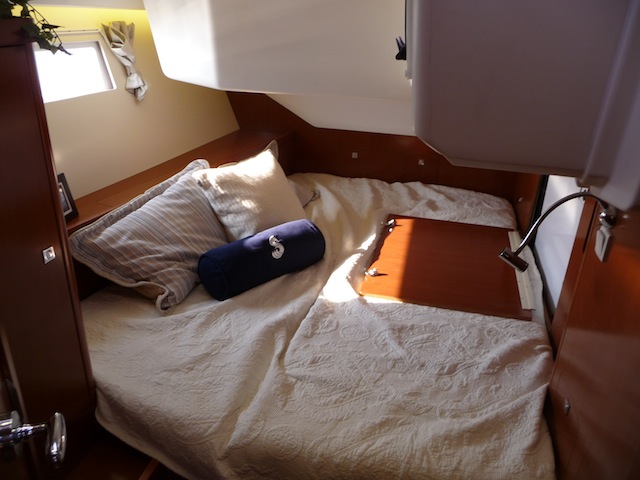 Boat show season is upon us. I spent last Thursday down in Newport, checking out the new boats on offer for the comic, then returned yesterday for some post-show test sails. This year when comparing boats I have been paying particular attention to how aft cabins are treated. Not the big palatial ones you find on center-cockpit boats, but the much smaller ones that get crammed in on either side under the cockpit on aft-cockpit boats.

These have been ubiquitous for years now, as they allow boatbuilders to fit up to three separate staterooms into even a modest-sized boat. Many of these cabins in the past (and more than a few still today) make miserable living spaces and are staterooms in name only. But things have been improving. Last March, you may recall, I proclaimed the aft cabin on the Catalina 445 to be “best on earth,” because it was not only livable, but extremely versatile. Walking the Newport show this year, I noticed more well designed aft cabins. It is encouraging to see that designers are paying more attention to how this space gets treated.

Exhibit number one you see up top. This is the aft cabin on the new Beneteau Oceanis 45. Though it’s not blatantly obvious in the photo (it is very hard to represent these spaces accurately in an image), the cabin has a large “changing area,” as it is called, in front of the berth, where there is full standing headroom. More importantly, the vertical clearance over the berth, as is evident in the photo, is also very good. The cockpit’s footprint doesn’t intrude too much on the space, and the berth itself has a fully rectangular area, with no cut-outs, so that two people can really stretch out on it.

This cabin’s most impressive feature is all the ambient light it enjoys. There’s a large portlight in the side of the hull, plus more ports in the cockpit footwell wall and in the back side of the cabinhouse, that all let light into the space from various angles.

The next best aft cabin I saw was on the new Hanse 495. As you can see below, it too has a proper-shaped double berth with a reasonable amount of vertical clearance under the cockpit’s footprint, which intrudes on the space hardly at all. Ambient lighting is also good.

I also liked the aft cabin on the new Tartan 4000. It isn’t nearly as roomy as those on the Beneteau and Hanse, but for a 40-foot boat it is quite impressive. Once you get to this size boat and smaller, it is very hard to keep a berth square without cut-outs, and vertical clearance over the berth is problematic. In the photo below you’ll see clearance over half of the Tartan’s aft berth is a bit constricted, though in fact it is not as bad as it looks here. The berth itself is square, so all its space can be used, and ambient lighting is very good, thanks to the large opening ports in the cockpit footwell wall.

I was somewhat less impressed with the aft cabins on the two Moodys that appeared at the show. One of these, the Moody 45 DS, which was first introduced in Europe a few years ago, has a rather unique layout. The cockpit and deck saloon, as on a catamaran, are all on the same level, separated only by a wall of sliding glass. This makes for a fabulous living space at deck level, but the aft cabins below suffer for it. 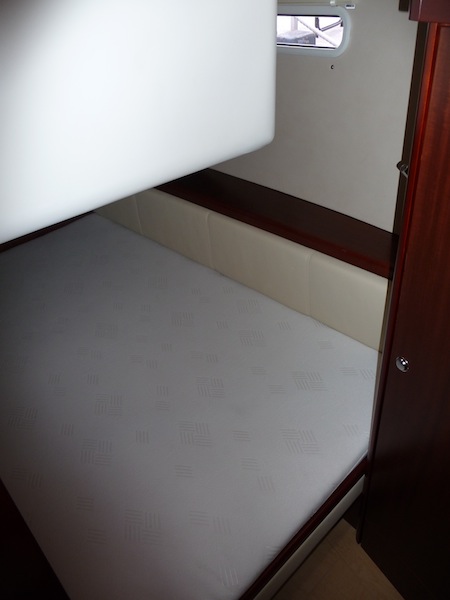 The intruding structure, interestingly, isn’t the cockpit, but the saloon. Though vertical clearance over the berth isn’t too bad, almost all of the berth is under the saloon’s footprint and ambient lighting is rather poor, creating a dark, cave-like effect. A great deal of vertical space between the saloon wall and the hull is also wasted. It doesn’t effectively increase headroom and can’t be used for storage.

Things are a bit better in the aft cabin on the Moody Classic 45. There’s more light coming in, but still the cockpit footprint seems very intrusive, particularly for a boat this size.