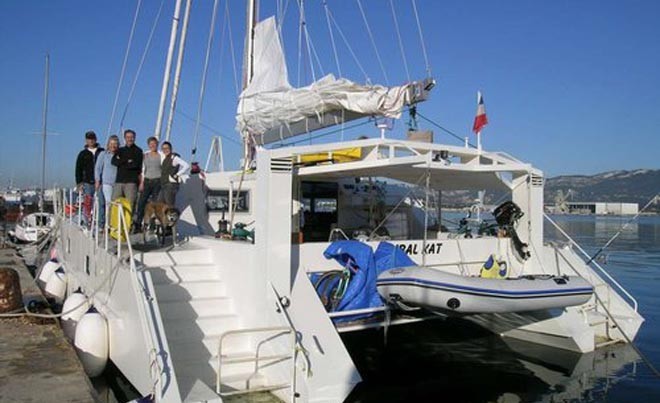 Now for some more bad news from the Piracy Desk. Several news outlets over the weekend have confirmed that a 55-year-old French cruiser, Christian Colombo, was killed by pirates off the coast of Yemen last week during an attack on a 56-foot French-flagged cruising catamaran, Tribal Kat. Subsequently, the victim’s wife, Evelyne Colombo, was rescued by a Spanish strike force from a group of pirates in an open skiff.

Tribal Kat issued a Mayday and was found abandoned with no one aboard last Thursday by a German warship, Bayem. Reportedly there were signs of a violent struggle having taken place on board. The EU Atalanta naval force that patrols the area launched an air-and-sea search, and a French warship, Surcouf, on Saturday identified a suspect vessel, which was pursued by a Spanish warship, Galicia. A “naval warfare team” from Galicia, assisted by a helicopter, disabled and sank the pirate skiff, taking seven pirates prisoner while successfully liberating their one hostage, Evelyne Colombo.

Christian Colombo, who was killed and thrown overboard during the initial attack on Tribal Kat, was a French navy veteran and former holder of a catamaran world speed record set in 1997.

Another yacht in the area is still believed to be missing.

One interesting point: Tribal Kat was sailing from the Med to the Indian Ocean, rather than the other way around, when the attack took place. In other words, the Colombos decided they would rather risk being attacked by pirates than take the trouble to sail eastabout downwind around the Cape of Good Hope.

I’m trying to restrain myself here, but I have to ask: does that seem reasonable to you???

In other bad news on Saturday: Somali gunmen are reported to have attacked a British tourist couple on the northern coast of Kenya at the Kiwayu Safari Village resort. David Tebbutt was murdered. His wife Judith was abducted and taken away by boat.

A footnote: Pirates in the area are currently believed to be holding at least 17 vessels and 375 crew members as hostages for ransom.