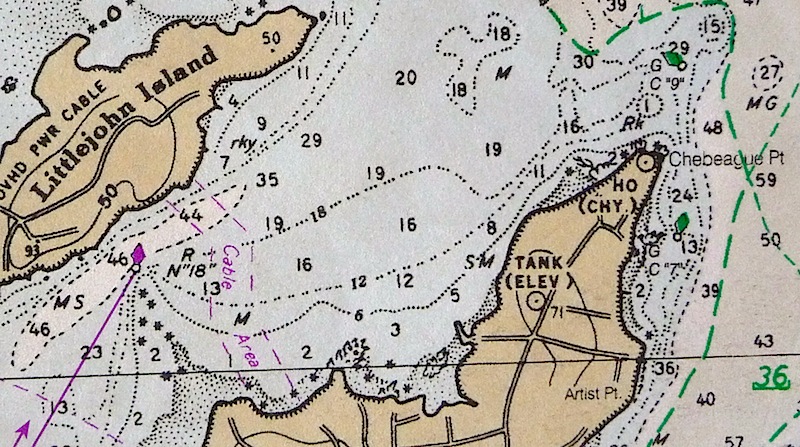 Our Labor Day weekend family cruise aboard Lunacy had been long anticipated, but somehow this anticipation did not translate into a prompt departure for the boat last Friday. As it was, we didn’t have all our crew and gear aboard, ready to cast off, until nearly 4 pm. During the depths of the summer this would leave four hours or more to sail to some choice anchorage to inhabit for the night, but now, in the more compressed days of early September, it really only leaves two.

In fact, I had no idea where we were going when we dropped the pennant to Lunacy‘s mooring at Portland Yacht Services. First I thought we might go east, so started motoring into the southeast breeze toward Peaks Island with an eye toward squeezing into open water through Whitehead Passage. But daughter Lucy, bless her soul, soon complained about the noise of the engine and urgently suggested we shut it down and start sailing.

So I stifled the motor, unrolled the new screecher, and sailed north through Diamond Island Pass toward the upper reaches of western Casco Bay. By the time the sun was starting to lower itself into the horizon, we had reached the narrow choke point off the Division Point bar between Littlejohn and Great Chebeague Island (see chartlet above), and I still had no clear idea where we would spend the night.

The very best cruising destinations, of course, are those you stumble upon unexpectedly. So it was in this case. After jibing around red nun 18, just south of Littlejohn, I looked over to starboard and noticed for the first time a large yellow building on a hill on the northern end of Great Chebeague overlooking an enticing swath of green lawn and an inviting placid anchorage. We reckoned it must be an inn of some sort and that they likely would be happy to serve us dinner. Within 45 minutes we had anchored outside their mooring field and were strolling across their grounds.

The dinner we enjoyed there, though not at all inexpensive, was by far the best we’ve had anywhere on Casco Bay while cruising aboard the boat.

Saturday morning we headed east for Quahog Bay. You might recall this is where I thought I might hide Lunacy in the event the recently departed Hurricane Irene posed a real threat to her. I hadn’t visited in years and have been thinking about it from time to time ever since Dodge Morgan died last year. His last residence on this earth had been on Snow Island, which dominates the serene lagoon at the very top of the bay. 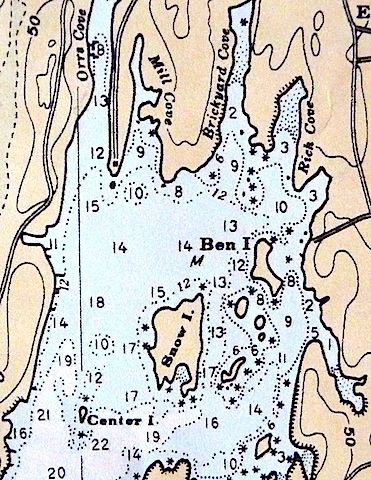 After a lunch stop at Cliff Island, an annoyingly windless and rolly passage across the body of Casco, followed by a long motorized slog up Quahog to the Snow Island anchorage, we arrived (again) not too long before sunset and settled down to a quiet meal and night aboard.

Sunday morning came calm and monotone grey, with tendrils of fog trying to reach up the bay to envelop us and never quite succeeding. By mid-morning, however, the sun was exerting itself, and we set out to patrol the boat-studded anchorage in the dinghy. We stopped and exchanged pleasantries with folks on a couple of boats we knew and admired from a distance several others we did not.

Later, after extracting elder daughter Una from her berth, we puttered ashore at the Great Island Boat Yard, located up Orrs Cove, and made another happy unexpected discovery. The Wheelhouse Cafe, on the road up the hill behind the boatyard, just opened last month and serves some killer baked goods, as well as a mean cup of Joe. Next year they’re thinking they may have a bumboat out working the anchorage, selling food and sundries to those too lazy to come ashore. Meanwhile, we found them exceedingly hospitable, particularly as they happily augmented our depleted supply of dishwashing liquid free of charge.

By 11 am we had the anchor up and were motoring back down the bay. Fortunately, we found a breeze outside and once clear of the bulk of the many ledges and rocks that litter Casco’s eastern reaches, we had the screecher flying again and enjoyed a lazy serene sail back toward the west. 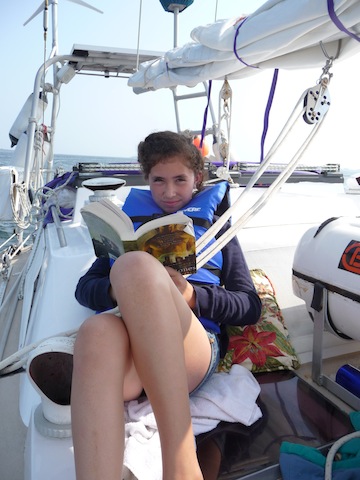 Again we had no clear idea where we were going. Remembering we had two birthdays to celebrate (both mine and Clare’s), we decided it might be best to have another fine dinner ashore at the Chebeague Island Inn.

And indeed… it was.

A note about the anchorage: Excellent holding in very sticky mud. Good protection to the south; not so good to the north. We had heavy southerly wind all Sunday night, then some rowdy thunderstorms Monday morning, and were firmly stapled in place riding on Lunacy‘s 45-pound CQR. The inn does maintain guest moorings, which they zealously police. They also actively discourage you from picking up vacant private moorings. Whether you pay for a mooring or anchor, however, they’re happy to bring you ashore in their launch.