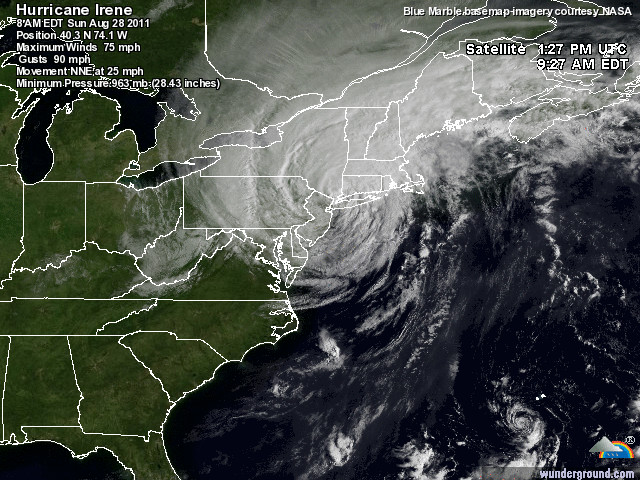 For a while, as I watched things unfold yesterday, online and driving down the New Hampshire coast, I thought I might well be writing something here about how totally over-hyped this storm was. But now, one day after, listening to reports on NPR about all the damage done inland by flooding in Vermont and upstate New York, and talking to friends who live in south Jersey–who have basements full of water, and no power, and no prospects of its being restored for a week or so–there’s no way I can do that.

In the end, all I can say is this: I was one of the lucky ones. And, fortunately, I over-prepared for this storm.

I hauled Mimi out on her trailer on Friday afternoon (after getting a hitch put on the family wagon) and stashed her behind the shed. This, as it turned out, was entirely unnecessary. She would have been fine on her dock without a single extra line or fender.

First thing Saturday morning I drove up to Portland and stripped Lunacy for a blow on her mooring. Both headsails off their furlers. Dodger off its frame. Anchor off its roller and lashed down on deck. Tied up the wind turbine. Everything remotely loose removed and stashed down below. Two dock lines as extra mooring pennants, just in case.

The only thing I didn’t do was take off the mainsail. Instead I just lashed it up good. I can tell you I agonized over that decision. But my gut told me there was no way this could be any worse than any of the early-season nor’easters the boat has easily survived on this same mooring in the past, with no prep whatsoever.

And my gut was right. According to the GoMOOS buoy reports, the strongest winds seen in the area were only 31 knots, with gusts to 38, at around 7 p.m. yesterday, out of the south-southeast, where the fetch isn’t all that bad. Child’s play, really, compared to a good nor’easter.

I expected the real damage would be done on the coast south of New York City, and I was right about that. All the damage done inland, both north and south of the city, took me by surprise.

We coastal creatures often forget that storms like this, so very full of rain, can overwhelm all the poor dirt people who live out of sight of the sea.

My heart goes out to them.