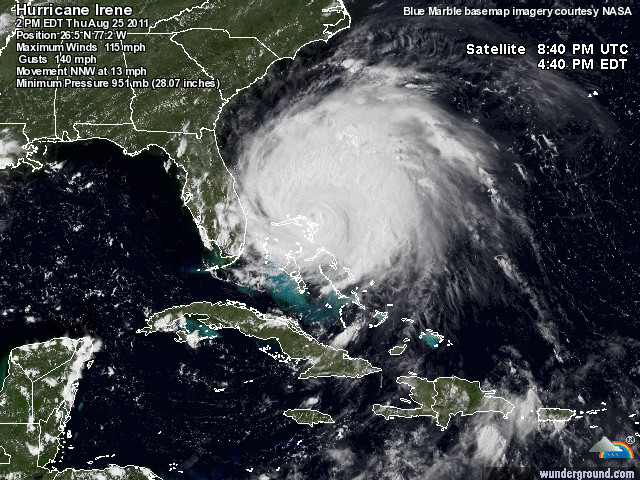 Boat owners all up and down the Eastern seaboard are scratching their heads over this beautiful ball of wind and rain. When I first started obsessively ogling her early yesterday, the forecast was extremely grim. Her projected track had her grazing Cape Hatteras at Category 3 strength, passing east of New Jersey and Long Island over open water, cutting over the root of Cape Cod at Cat. 2 strength, then driving right up the coast and over my boat Lunacy in Portland, Maine, at Cat. 1 or 2 strength.

The forecast has steadily improved since then. Right now Irene is just departing the Abacos in the Bahamas (see the sat image up top, which is about 30 minutes old as I write this), and is currently projected to march up the Delaware and Jersey shore before heading inland at New York City. She is now expected to have devolved to tropical storm status by the time she reaches Lunacy‘s latitude and should be many miles west over the Connecticut River on the NH/Vermont border.

Right now everyone everywhere seems to be having their boats hauled, but I’m not sure this is really necessary for those north of Cape Cod. Projections made by several computer models show the storm tracking even further west than the current forecast, and this has been the trend for at least 24 hours now.

My current plan is to keep watching the storm and either a) strip Lunacy for a big blow on Saturday, but leave her on her mooring, or b) take her to a hidey-hole up the north end of Casco Bay on Sunday morning, plant multiple anchors, and ride it out there.

This here is the hole I have in mind: 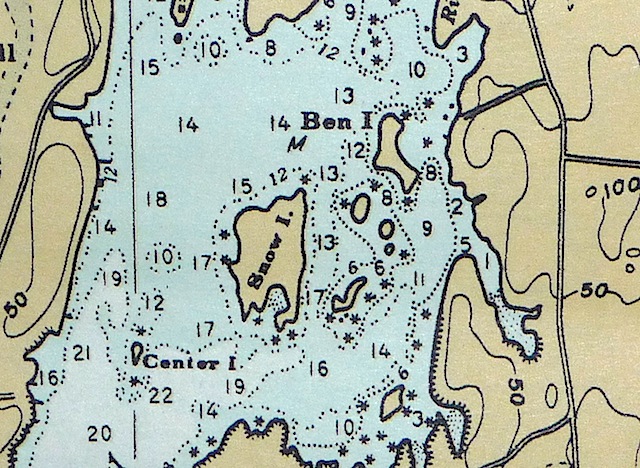 Our other boat, Mimi, a 15-foot Drascombe Dabber, must come out on her trailer, as the owner of the dock here in Portsmouth where she lives has asked everyone to leave. I have an appointment tomorrow a.m. to have a trailer hitch put on the family wagon so I can comply with the evacuation order. Unfortunately, I traded my car, which already had a hitch, for another one just last month.

Meanwhile, this of course is the song running through my head.

PS: The Round Island Regatta, held this past Sunday, was a grand success. Many participants, many onlookers. An excellent example of stadium sailing at its best. I raced Mimi with Phil “Wrong Way” Cavanaugh as crew. Unfortunately, we were several minutes late to the start line (my fault). So we cut some corners anmd made it look like we were in the hunt and had a fine time anyway. The awards ceremony was more like a call for volunteers; Phil won a trophy for Most Improved Crew. I am very proud of him.

Sorry I have no pix. But I hope there will be another event next year! 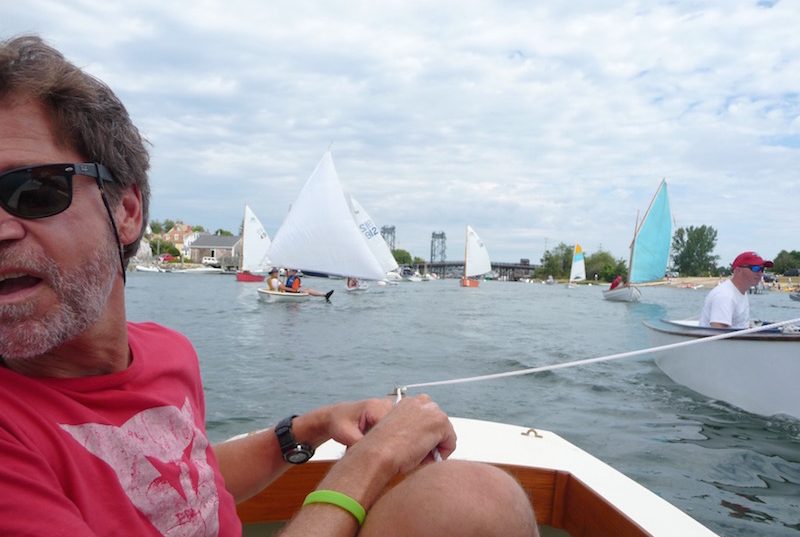 MELONSEED SKIFF: Successfully Deployed as Secret Weapon (Sort Of) in 2015 Round Island Regatta