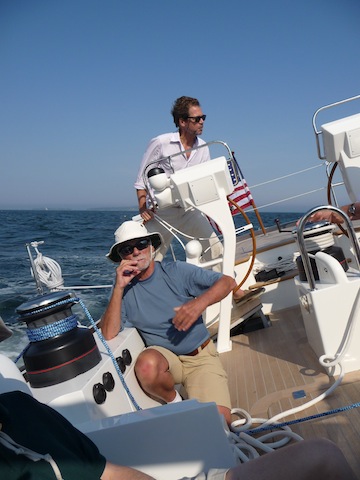 One nice thing about this sailing journalism game is that we so-called journalists often get to tool around on hideously expensive boats we could never hope to own ourselves. For example, in the photo up top you see our hero steering the new custom 68-foot Stephens Waring sloop Isobel on Penobscot Bay last Friday afternoon. In the foreground is my colleague and erstwhile competitor, Dennis Caprio, of Yachting magazine.

Which, of course, is what we are. Though, in our defense, I should note that Dennis and I were both invited aboard this boat.

A couple of weeks earlier, we were also invited to go sailing on Narragansett Bay aboard Lionessa, the first Swan 66 FD to reach these shores. (In what was a regular sailing journo love-fest, Herb McCormick, of Cruising World and Sailing World magazines, and David Liscio, from Sailing magazine, also came along for the ride.)


It is interesting to compare these two boats, as they have similar dimensions and are both what I would call “performance cruisers.”

First, Lionessa. Yes, she is a production boat (hull no. 1 in the Swan 66 line, launched back in 2008), but these latter-day Swans are in fact all highly customized as they are built. (The “FD,” by the way, stands for “Flush Deck.” There is also a sister variant, designated “S,” which has a raised saloon.) Lionessa‘s overall length is 66 feet, poised over a 56.4-foot waterline. Her beam and draft are 17.68 feet and 10.5 feet, respectively. Construction is fiberglass, with solid laminate below the waterline and cored laminate above. Much of the interior joinery, though it looks like old-school Nautor Swan solid woodwork, is cored composite paneling with teak veneers.

The boat seemed quite easy to handle. Not that I would know. Keith Yeoman of Nautor and the boat’s regular skipper and mate did all the deck work, including launching and recovering an asymmetric spinnaker, while us lazy journalists did nothing but steer and eat food we were served. I did notice, however, that much of the deck work could be accomplished by simply pressing buttons.

One unique feature I found up in the forepeak I thought was very cool was this silo-style chain locker. 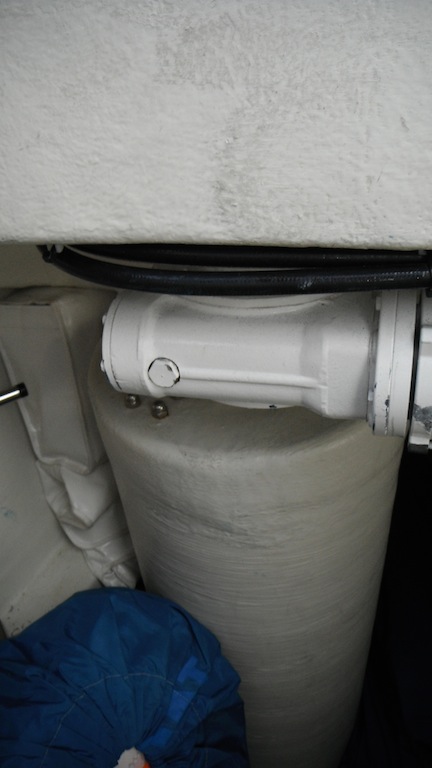 Other builders should take note. The silo takes up much less space than a conventional chain locker, and according to Andy Quarterman, who has served as the boat’s skipper since before it was launched, the anchor rode has never once jammed running in or out of it.

Isobel, meanwhile, is a true custom one-off, built at Brooklin Boat Yard out of cold-molded wood and epoxy and launched this summer. Her length on deck is 68’8″, nearly 3 feet longer than Lionessa, but her waterline length is nearly the same–57’2″. (Her overall length is actually over 75 feet, thanks to her prodigious unstayed bowsprit.) Isobel is also quite a bit narrower than Lionessa (15 feet), but her draft is just a little bit less (10 feet). Like Lionessa, her interior is largely made of cored composite paneling veneered with fancy wood–in this case birdseye maple and oak. Many details–like the ornate saloon table, the twin steering pedestals, the sleek anchor roller, etc. etc. etc.–have been custom fabricated for this one boat. 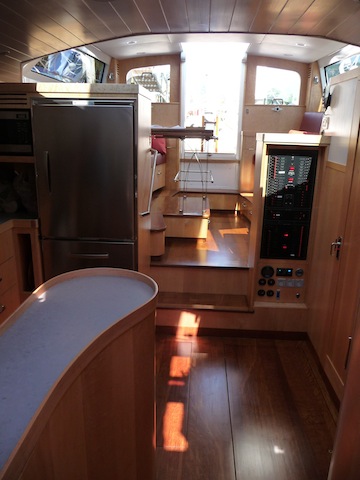 Isobel also has lots of buttons to press in the cockpit, though not nearly as many as Lionessa. Interestingly, only the mainsail shape controls (vang, outhaul, and cunningham) and the neat custom foot cleats at each helm station are hydraulically powered. All the really heavy workers–all the winches plus the headsail furler–are electric and are fed power from a lithium-ion battery pack. (Note there is no backstay. Note, too, both boats carry carbon-fiber rigs.) 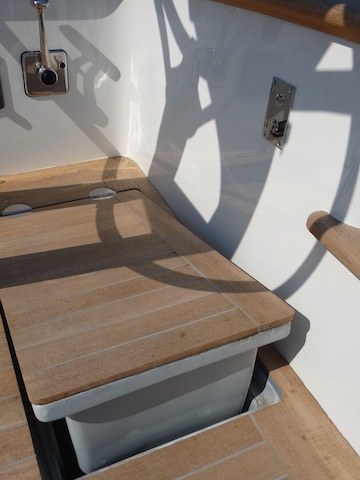 Primarily because we were racing (in the inaugural Penboscot Bay Rendezvous), working the deck on Isobel sometimes seemed a bit frantic. I earned my keep this time and actually helped out on the foredeck, which was great fun. In a more relaxed setting, however, as on Lionessa, I expect two or three people could work the boat quite efficiently.

The most interesting point of comparison is price. You’d think a one-off cold-molded wood boat would cost considerably more than a production glass boat of similar size, but not in this case. According to designer Bob Stephens, Isobel cost about $3 million to build. Meanwhile, Keith Yeoman quoted me a base price for a Swan 66 of 3.6 million euros (or about $5.17 million, at today’s exchange rate). Both prices, of course, are so far outside my ballpark that the difference is irrelevant, but to much more profligate spenders, no matter how heedless they are of the cost of things, it must seem significant.

Why such a big price variation? I point you to one particularly important specification not yet mentioned–displacement. Lionessa displaces 66,000 pounds, while Isobel weighs in at only 38,000 pounds. As my good friend Dave Gerr has often explained to me, heavier boats almost always cost more. Figure the cost of these two boats on a per-pound basis, and the numbers are very similar–$78.9 per pound for Isobel versus $78.3 per pound for Lionessa.

What does this mean in practical terms? In this case, it looks to me like the extra weight in Lionessa is due mostly to accommodations. She has two double berths, five single berths, and four heads. Isobel, meanwhile, has but one double berth, three singles, and two heads.

Which boat makes the most sense for all you tycoons out there? I’d say that depends entirely on how many people you want to share your wealth (and your boat) with.