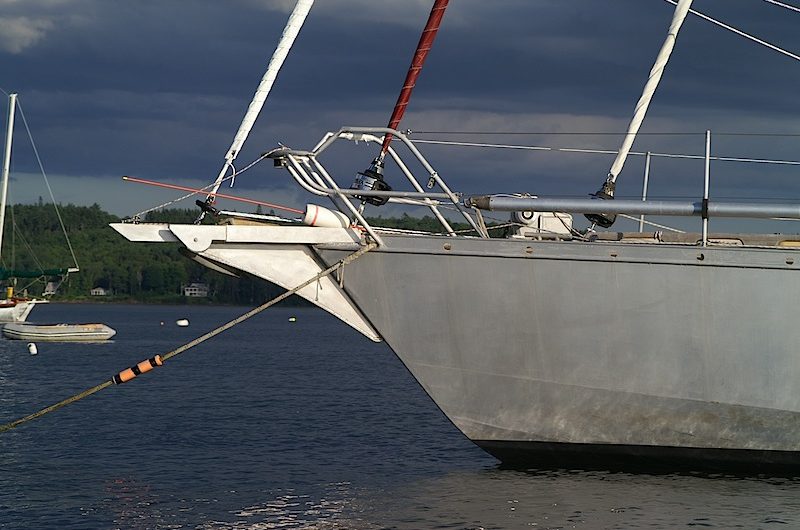 Operation Fetch and Test My New Sail (OFTMNS) officially began this past Sunday evening, when I hooked up with my old pal Loric Weymouth in Portland. He agreed at the last minute to join me as crew on Lunacy for an overnight sail to Rockland, taking the place of Scott Alexander, of Selden Mast, who had agreed several weeks ago to join me, but kicked me to the curb at the last minute in favor of some racing gig. Scott’s betrayal was prescient, as the ride to Rockland was no picnic. For the first few miles we did well enough, reaching along at 7 knots in a moderate southerly, but soon the wind died and we spent the rest of the night motoring through a fierce beam sea.

By sunrise we were just west of Monhegan Island. The highlight of the passage came soon after, when we saved two lobstermen from starving in Muscle Ridge Channel. Their boat had broken down, and th ey’d been anchored all night waiting for a tow. We passed them a garbage bag full of beer, bagels, fruit, and smoked fish in homage to the Pot Warp Gods, who had refrained from wrapping themselves round our propeller as we ran blind all through the night.

We arrived in Rockland about 0800 Monday morning, almost exactly 12 hours after leaving Portland. Though neither of us had slept much, we promptly lurched in action. After first marching inland to retrieve one of Loric’s interesting motor vehicles, we shuffled some propane bottles, then–finally–proceeded to Pope Sails to collect the new sail.

Stretched out on the loft floor it looked enormous, which I considered a good sign. All of Lunacy‘s other sails, particularly the mainsail, look disappointingly small when laid out flat. We next acquired some fancy hybrid high-modulus rope at Hamilton Marine to make sheets with, and Loric, a rigger by trade, insisted on sealing and whipping the ends for me.

By 1500 hours I was back aboard the boat, alone with all the bits and pieces I needed to fly my new sail. I was thoroughly exhausted, eyelids barely propped open, but my enthusiasm propelled me forward. Though too tired to actually go sailing, I could at least assemble the furling gear and hoist the sail and have it ready to go.

I found that the Selden Code-X continuous-line furler and double cam-cleat control I had purchased from Scott were very easy to put together. I had worried that leading yet another furling line to Lunacy‘s pitifully small cockpit would make things much too busy there, but in fact the cam-cleat unit is quite discrete. I clipped it to a shackle on the toerail right aft on the starboard side, where it was out of the way, but where the line itself was also easily at hand. 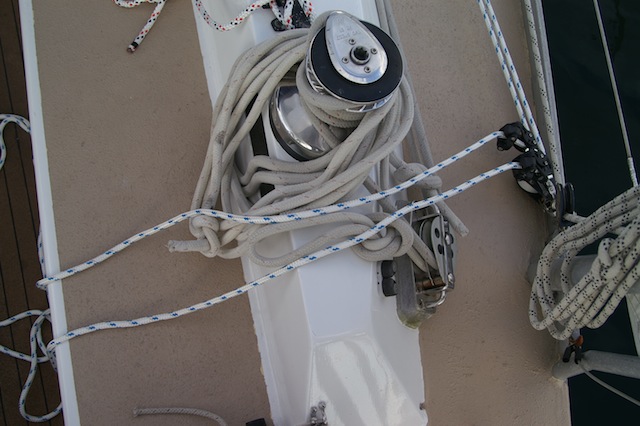 I’d also worried over how I might lead the furling line all the way forward to the furler on the bowsprit. With all the kit in hand, however, an obvious solution at once presented itself. Running the line forward from the cam-cleat, I simply passed it outside one of the stanchions, and so had a fair run with one slight turn in it right to the furler. I then hoisted the sail on my new high-modulus spinnaker halyard, dogged it down tight, and gave the furler a spin. It worked perfectly, and in a flash the sail was rolled up neatly on its torque-rope luff. 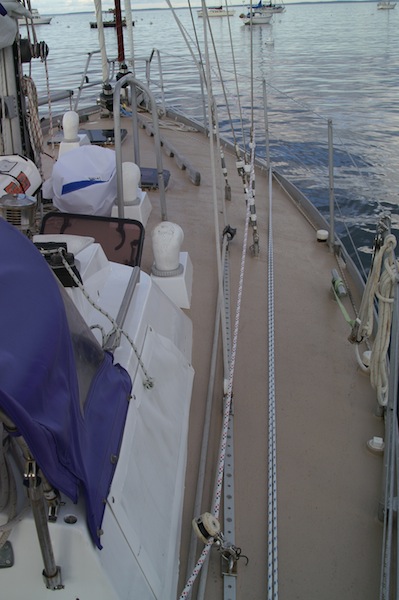 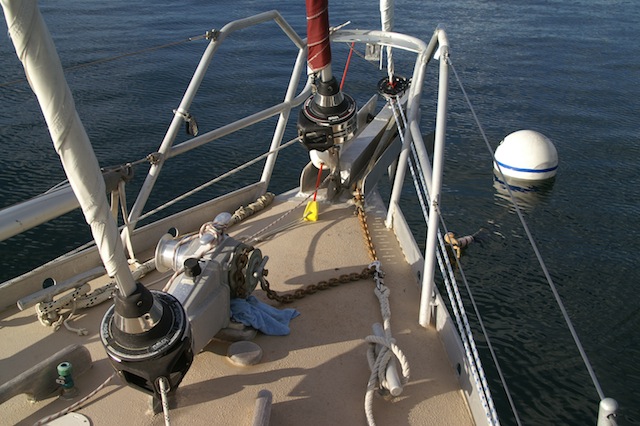 You’ll note there is one potential conflict up on the bow. The furler when rigged sits very close to the anchor. Though (as I later found) it would prove possible to sneak the anchor overboard without disturbing the furler, I expect when retrieving the anchor it may be necessary to first ease the spinnaker halyard and then unclip the furled sail to get it and the furler out of the way.

As for the sheets, I ran these aft outside the shrouds to snatch blocks on the aft end of the genoa track. The only fair lead, I found, was to my antique three-speed secondary winches, which in fact are much larger than my primaries. 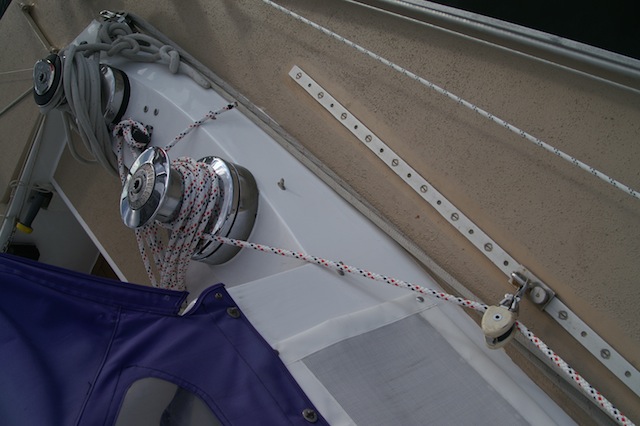 The following day conditions were perfect for a test flight, with the wind blowing from the southeast at 5 to 7 knots. Exactly the sort of a breeze that has always had me pining for a much larger headsail.

The test went very well. I found I could pinch a little higher than 35 degrees (AWA) before the screecher’s luff started folding in on itself and that off the wind I could carry it a little past 145 degrees. Its sweet spot is right where I wanted it–between 45 and 120 degrees. And, of course, it has a very positive effect on boatspeed. Sailing on a close reach I saw speeds up to 7 knots in just 9 knots of apparent wind. 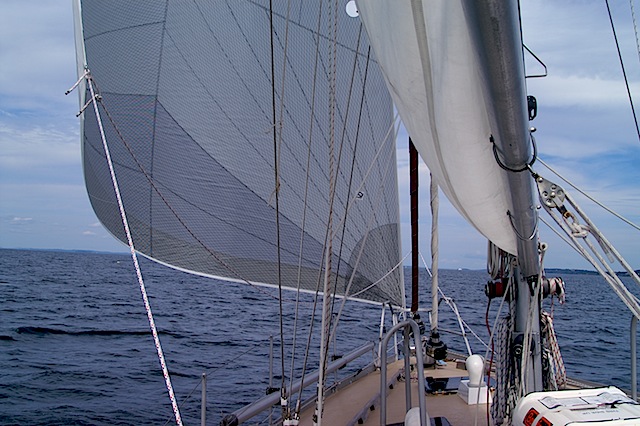 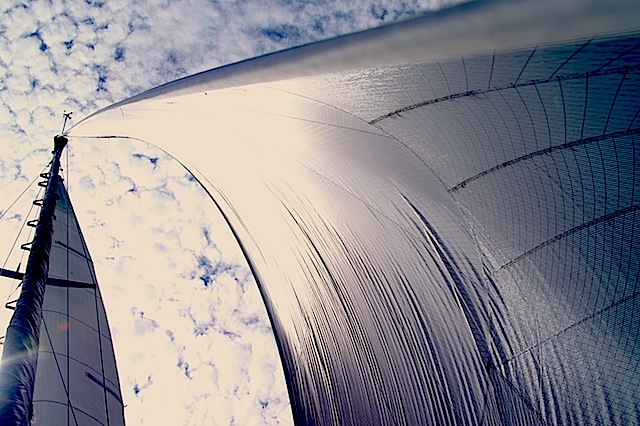 In organizing all this, the one thing I worried about most was clearance at the masthead. Hoisting the screecher on an offset spinnaker halyard, I was afraid it would foul the headstay when flying on the “wrong” tack (i.e., with the halyard crane to windward of the headstay). All spring I had tortured Brian Harris at Maine Yacht Center with various ideas on how to modify the masthead to prevent this. So I was very gratified (and I am sure Brian will be very relieved) to learn that the modification we finally settled on was perfectly effective. As you can see here, there is plenty of clearance between the screecher’s luff and the rolled-up jib on its headstay: 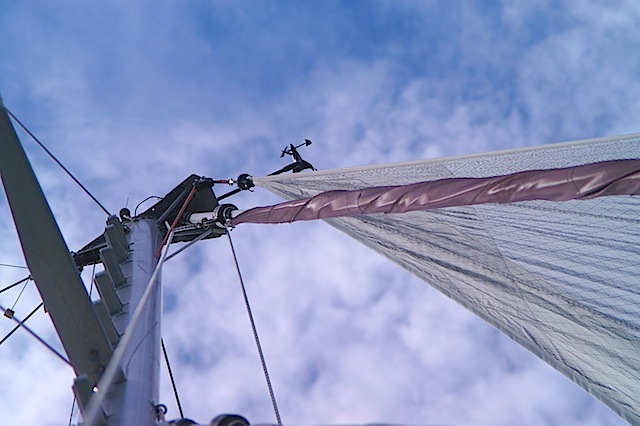 Another thing I fretted about was tacking the sail, especially when sailing singlehanded. I knew it would be necessary to furl and unfurl the screecher each time it was tacked or jibed, and I was afraid this would prove awkward. In practice, however, the furler works so smoothly and easily I found it is easier to tack the screecher than it is to tack the working jib, which must be horsed around the fixed staysail stay as it shifts from one side of the boat to the other. In lighter wind the boat carries enough way to turn smartly through a tack as the sail is first furled, then unfurled. Sailing in stronger wind, at the upper limit of the screecher’s range (about 12 knots), the furler still works easily enough that the sail can be rolled up quickly.

I learned all this while sailing from Rockland to the Barred Islands, which lie northeast of North Haven Island and west of Deer Isle, near the top of East Penobscot Bay. There is a gorgeous anchorage there I had never visited before. As I expected, it was indeed possible to sneak the anchor’s stock past the furler as I dropped the anchor overboard. Once settled, I ended my test by dropping and stowing the sail, as the forecast was for very strong wind that night. The rolled-up sail was easy to handle and fit easily in its bag after it was flaked into a bundle. 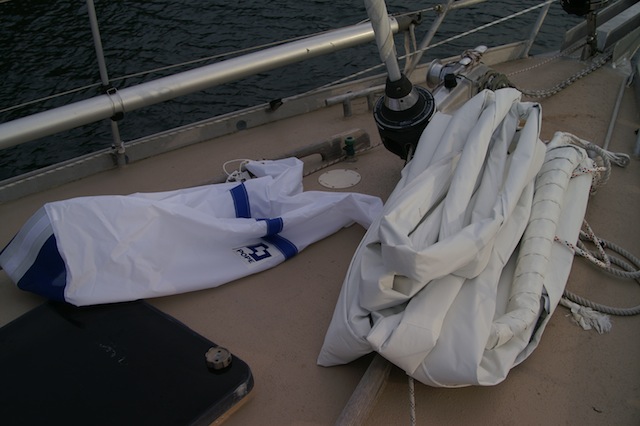 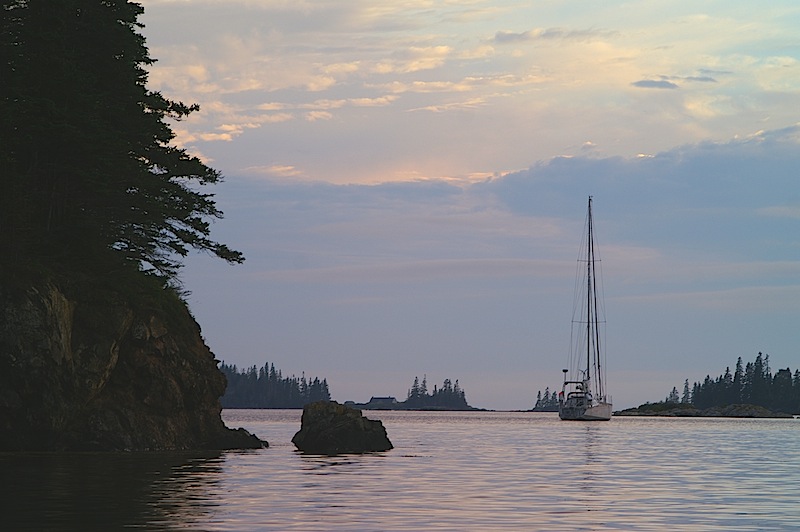 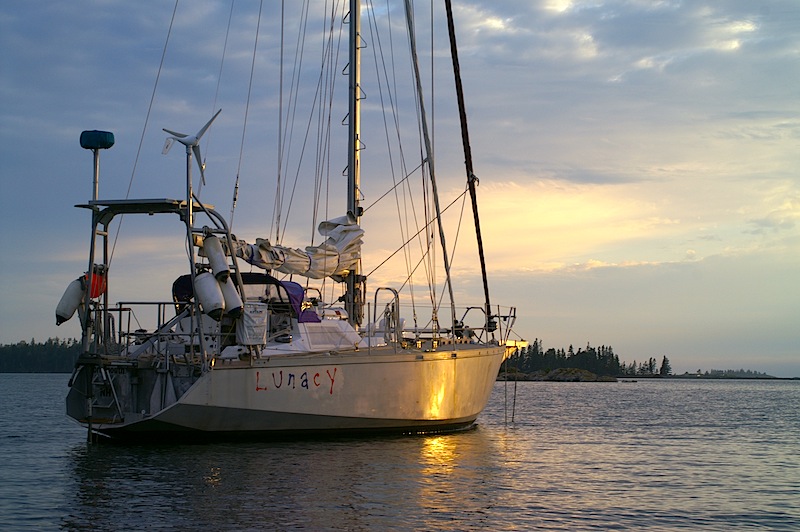 I spent the rest of the evening trolling about the tiny archipelago in my dinghy. And later, over some smoked mackerel and a salad, I hoisted a glass of cheap chardonnay to the successful completion of OFTMNS.