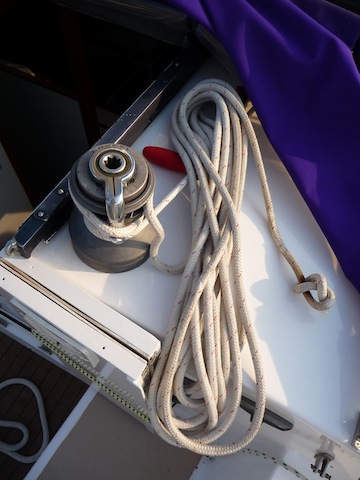 Perfect O-shaped coils of rope look mighty nice when done up properly, and in many instances this is a perfectly appropriate way to make up and stow an idle line on a sailboat. But rope needs to be trained to do this well, and in some instances the training will inhibit the rope’s ability to do its job properly when working.

This happens most often with lines that run through a multi-part tackle. If you take the tail of a line that runs through a tackle and coil it down in perfect ovals when stowing it, you’ll soon find the line starts twisting up in the tackle when you’re using it. Eventually you must unreeve the whole line from the tackle, untwist it so it runs fair again, then re-reeve it. To avoid this you should coil the line in a figure-eight pattern when stowing it.

To train a line to coil down in an oval, you give the body of the rope a full clockwise twist with your wrist as take up each coil. This is if you’re laying up coils from your left hand to your right; if you’re going the other way, the twist should be counter-clockwise. Over time the rope learns the bias and coils more easily, which is why it’s important on a boat with a large crew that everyone coil lines the same way. Otherwise the lines never learn which way they want to go and will hockle as they are stowed first one way, then the other, by different members of the crew.

A figure-eight coil, on the other hand, is a more neutral configuration. When stowing line this way you need little or no twist to get the coils to lay fair. At most you’ll have to give a little quarter-turn counter-clockwise (if coiling from your left hand to your right) as you take up a coil. The line learns no bias, hence will not hockle and twist when run under load through a tackle.

On most modern cruising boats the only line running through a tackle is the mainsheet, so it’s good idea to at least coil this one line in a figure-eight when stowing it. On race boats generally all lines are stowed this way, so there’s no confusion among the crew and lines are always likely to run fair. Also, this is often the only way you can get a hybrid line (with a low-stretch high-modulus core and a polyester cover) to coil neatly at all. Such lines are quite common on race boats, and are increasingly popular on cruising boats.

For example, Lunacy now has a high-modulus halyard for her new screecher, plus two new high-modulus sheets, and I’ve found these lines can only be coiled in a very loose figure-eight.

(I’m in Rockland aboard Lunacy as I write this, and the new sail just came aboard yesterday. Fist pump. Details to follow.)