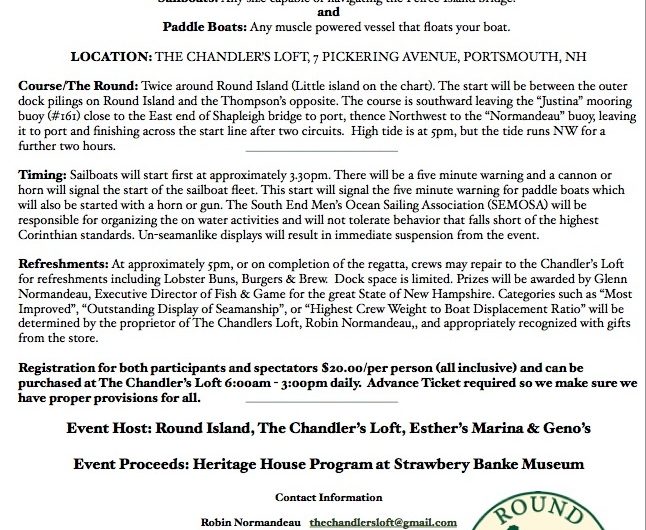 Chas. “May I Cast Off Now?” Lassen, last seen on a luxurious catamaran off the island of Grenada as he sought to evade questioning regarding an alleged attempt to murder his wife, has returned to the United States and is now engaged in wholesome non-profit work. Or so he would have us believe.

As part of an ongoing effort to aid the Strawberry Banke Museum in Portsmouth, NH, Lassen has taken command of the museum’s Heritage House Program. In addition to dunning friends and neighbors for cash donations to support said program (unmarked bills preferred), Lassen has also organized a regatta (see up top for details) in which a wide array of vessels (human and wind propelled) will race around his vast island estate.

Lassen only recently refurbished and rebuilt the manor on Round Island, which formerly is believed to have been operated as a brothel. Rumors that Lassen intends to reinstate it as such have not been confirmed.

In any event, Lassen’s success in revitalizing Round Island has eminently qualified him to take the lead in the Heritage House project, in which several under-utilized structures on the museum grounds will be refurbished and developed as residential and commercial properties so as to provide the museum with a reliable income stream.

The first annual Round Island Regatta (in case you can’t read the notice up top) is to be held Sunday, August 21, at 3:30 p.m. All human and sail-powered vessels capable of gaining access to the waters round Round Island (there is a convenient public boat ramp situated directly opposite on Pierce Island) are welcome to participate.

Tickets to view or participate in the race are currently on sale for $20 a pop at the Chandler’s Loft (7 Pickering Ave. in Portsmouth) daily from 6 a.m. to 3 p.m.