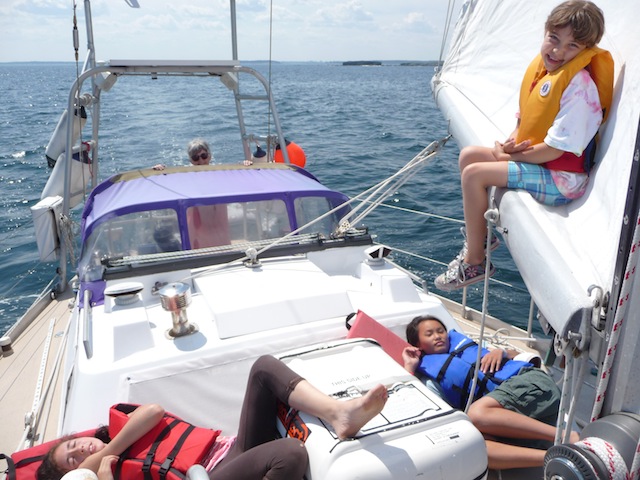 I thought I might simulate a mishap or two while out and about on Lunacy this past weekend, just to maintain the theme that has developed here of late, but I was enjoying myself too much to bother. The boat and its systems (thankfully) performed flawlessly, and the weather was fabulous. We enjoyed a nice light-air reach across the breadth of Casco Bay on Saturday afternoon, then pulled into Cundy’s Harbor and picked up a mooring for the night.

Cundy’s, like several other small villages on the Maine coast, has managed to cling to its identity as a fishing community, and its waterfront is still dominated by working boats. But the pressure of latter-day coastal real estate development is palpable. Many of the houses in the heart of the village, including several right on the shore, still seem to be in local hands. But a few of the over-the-top summer McMansions that are increasingly prevalent along the Maine coast have started sprouting up like weeds.

Thankfully, Holbrook’s Wharf, the working heart of the harbor, managed to recast itself a few years ago as the non-profit Holbrook Community Foundation and is now a successful mixed-use operation that blends a commercial fishing operation with a bona fide tourist trap/restaurant. Hawkes’ Lobster Pound, directly next door, has managed the same sort of trick. Buried deep inside its thick veneer of gimcrack trinkets and gifts, I found there is in fact a core of a commercial lobster business.

In terms of protection from the elements, Cundy’s is pretty much a harbor in name only. Nestled on the west bank of the New Meadows River, most of the mooring field and anchorage is wide open to the south and I am sure can be quite rolly when any sort of swell is coming in from offshore. Fortunately, we had a very calm night there and by morning the water’s surface was as smooth as plate glass. 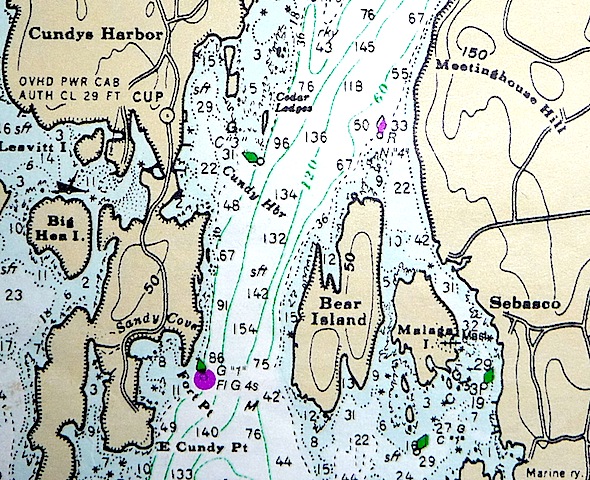 I fired up the diesel to roust the crew out of bed, then puttered directly across the river to Malaga Island, where we anchored and went ashore for a hike after having some Sunday breakfast. While we ate I gave the girls a short synopsis of the island’s tragic history. Then, on going ashore, we found a gaggle of kayakers with a tour guide/leader who was trying to tell the same tale. Unfortunately, his version of events, though certainly sympathetic to the former residents of the island (who were summarily evicted by the state in 1912), was seriously inaccurate in its details.

By the time we returned to the boat, the sea breeze was filling in nicely. We had a rollicking good sail back to Portland, and–at long last–I felt as though my summer season afloat was now properly underway.