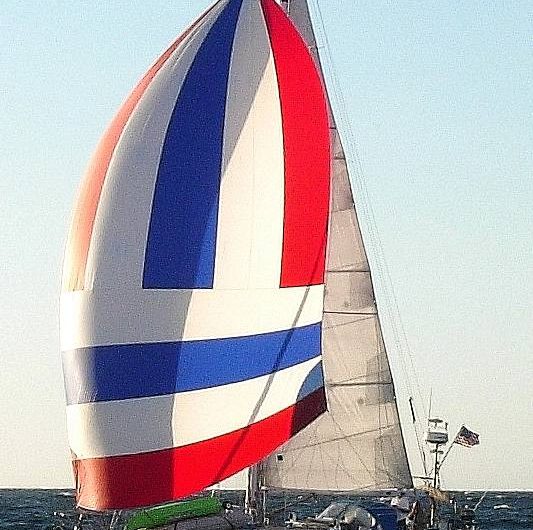 The Landfall 38 is one of a series of four Landfall models designed by Rob Ball and produced by C&C Yachts in Ontario, Canada, from the late 1970s into the mid 1980s. Unlike most C&C boats, which were designed as straight racers or racer-cruisers, the Landfalls were conceived and marketed as performance cruisers. They were a bit ahead of the curve and were not as commercially successful as they should have been, as many cruising sailors at the time still favored heavier more traditional designs.

The Landfall 38 was the most successful boat in the Landfall series–about 180 were built from 1979 to 1985–and today it makes an excellent choice for both coastal and bluewater cruisers looking for an older boat that is fast, comfortable, affordable, and well built.

C&C was a dominant player in the 1970s racing scene, yet managed to resist many of the design extremes inspired by the IOR rating system. The Landfall 38’s hull form, for example, is directly derived from an earlier C&C 38 racer-cruiser, and though very much a creature of the IOR–with a raked bow and fine entry, beamy midship section, and somewhat pinched stern–it is not extreme. Compared to the earlier 38, the Landfall has a longer shoal-draft keel and a much shallower spade rudder (draft is 5’ versus 6’1”), plus a nearly vertical transom (as opposed to an IOR-style reverse transom).

The Landfall is heavier and has slightly less sail area, but is said to sail nearly as well as its racing sister. The Landfall’s tall double-spreader rig (supported by rod rigging, no less) and narrow sheeting angles make it quite closewinded, even with its shoal keel. The boat also balances easily, has a light helm and a relatively smooth motion in a seaway, and is stiff in a breeze. It is generally fast and easily driven, as evidenced by the fact that the seemingly undersized standard 30 hp Yanmar diesel reportedly has no problem pushing the boat up to hull speed.

The Landfall also has a longer, fuller cabinhouse than its racing predecessor. The extra space inside is put to good use, and the accommodations are unique and well thought out. Most Landfall 38s feature a large athwartship aft cabin set off by a full bulkhead and door just forward of the companionway. In some cases there is an undersized double quarterberth to port and a single berth to starboard; in others the portside double is larger and there is a small nav station to starboard.

The space forward of the aft bulkhead, in the widest part of the boat, is dedicated to the head and galley, both of which are uncommonly spacious for a boat this size. The galley to port, laid out in either a U- or L-shape, has two deep centerline sinks and scads of storage space; the head to starboard on some boats even includes a separate shower stall. Forward of the galley and head is the saloon, with a fixed centerline drop-leaf table between the straight settees (a few boats have a fold-down bulkhead table instead), followed by a separate forward stateroom with a V-berth whose foot, alas, is a bit narrow for two large adults to share. 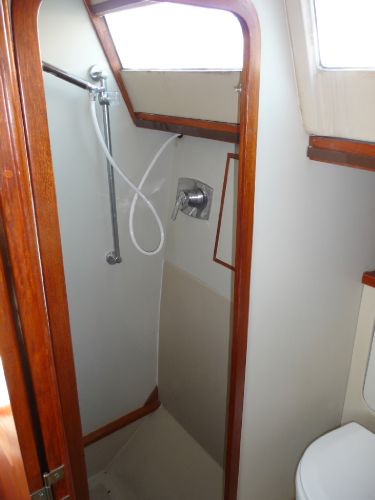 One significant drawback to the ambitious floor plan is that engine space has been short-changed to accommodate it. The engine is mounted backwards deep under the cockpit with a V-drive and is difficult, though not impossible, to get to. Access forward (to the back of the engine) is via a bureau assembly under the companionway that realistically can only be displaced after its drawers have first been emptied. Access aft (to the front of the engine) is via a small panel alongside the port quarterberth or through the starboard cockpit locker, which also must be emptied before the engine can be reached.

Unfortunately, funnels and hoses are normally needed to add fluids to the engine. The bottom line is that routine maintenance may seem too troublesome for some lazy owners to bother with. If buying one of these boats you should check the engine carefully; if you own one, you need to stay motivated about taking care of it. The engine space also lacks sound insulation, so the quarterberth (or berths) can be noisy when motoring.

Structurally the Landfall 38 is well put together and is certainly strong enough for offshore work. As on most C&Cs, the deck and most of the fiberglass hull are cored with balsa. This saves weight and stiffens the laminate, but the core is vulnerable to moisture intrusion over time. C&C pioneered balsa-sandwich construction in the mid-1960s and by the late ‘70s was very adept at it, and there have been few reports of major delamination problems on Landfall 38s. Evidently, however, fasteners for deck hardware may penetrate the core in some areas; prospective buyers should therefore make sure there is no significant core saturation on boats they are interested in. A new owner would be wise at some point to remount and rebed all hardware, making sure to seal off any exposed core with epoxy.

The deck joint, on an inward flange, is through-bolted and sealed with butyl tape, which is not adhesive and reportedly may leak eventually. The Landfall 38 rarely buries its rail while sailing so this should not be a huge problem. More bothersome are leaks around stanchion bases caused by uneven loads on backing plates that can’t seat flush on the narrow deck flange. To cure these it is necessary to build up a flush surface under the plate with some fairing compound and remount and rebed the bases. The ballast is external lead bolted to a strong keel stub. The mast is keel-stepped, and though the mast step is well designed to prevent mast-heel corrosion, the partners are prone to leak.

Other complaints about the Landfall 38 are relatively minor. Both the on-deck anchor locker and the anchor roller on the stem are a bit undersized (the former is impossible to cure, while the latter is not); the non-skid surface on deck is not very aggressive and eventually needs to be renewed; plus there is a fair bit of teak on deck that takes some work to keep up. Otherwise the fit and finish on the boat is very good and generally superior to that found on most production boats built around the same time. The Landfall 38 was an expensive boat to buy new in its day, but prices on the brokerage market are reasonable and the boat now represents an excellent value. With some patience and effort it is not too hard to find one in good condition. 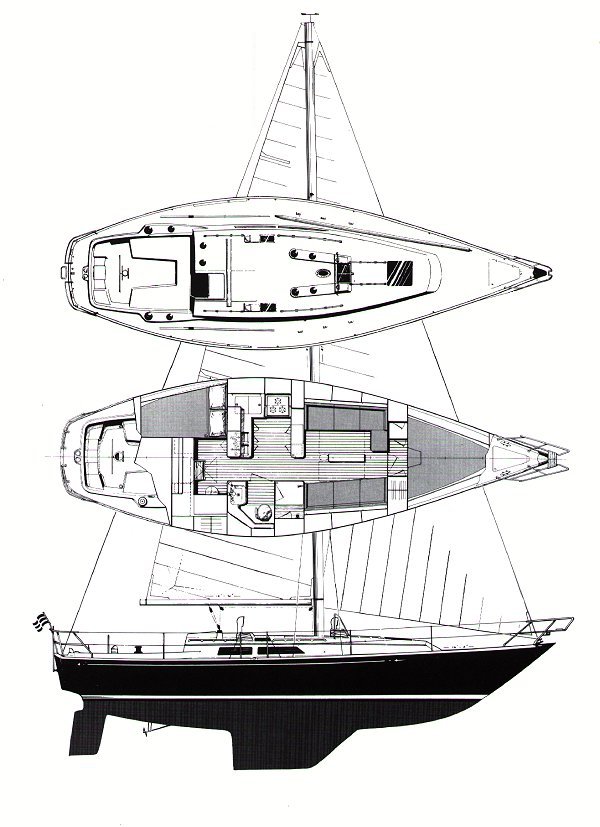