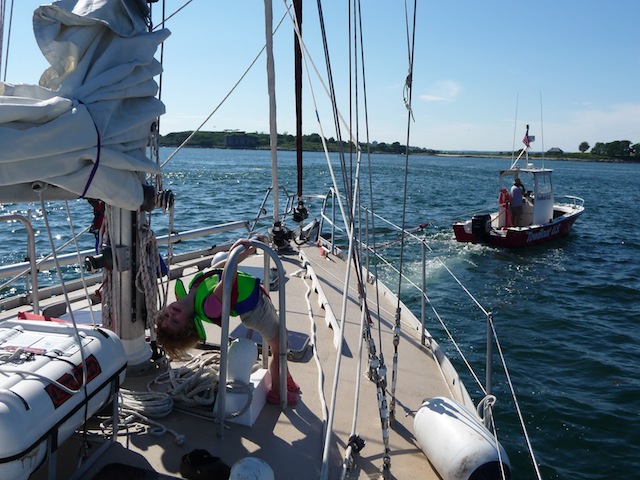 Judging from all the traffic enjoyed by my last mishaps post, it would seem you guys really enjoy reading stories about my incompetence. (Or at least my man Ben Ellison over at Panbo enjoys pointing them out to people.) This one, I’m afraid, may be more embarrassing than the last.

This was not an ambitious outing. Merely a Sunday afternoon daysail with myself, Clare, and Lucy aboard, along with our good friend and neighbor Guy Marshall and his young daughter, Eleanor. Lunacy had been lying in a slip in Portland at Maine Yacht Center, where she is being fitted with a new battery monitor (see previous Lunacy Report post, at the bottom, re electrical power). We departed said slip under power–without mishap–and were soon under sail west of Great Diamond Island, heading north up to Chandler Cove, where I proposed to anchor off Little Chebeague Island, so we could take the smalls ashore for a romp.

Once we sailed into Chandler Cove, however, I found the engine would not start. Turned the key, heard the squeal of the ignition alarm, pressed first the preheat button, then the starter button. And as soon as I touched the latter… splat, the ignition circuit went dead. Even worse, it was permanently dead. Turning the key off then on again did nothing, and it seemed clear there was now simply no electrical power at the ignition panel.

I figured this would be an easy fix. But I thought only briefly about just dropping the sails and anchoring right there in Chandler Cove to figure it out. The sea breeze by now was up and pumping nicely, right into the cove, which had lots of boat traffic moving through it. If I failed to make the fix (always a very real possibility), I knew it would be hard to raise anchor, make sail, and beat out of the cove. Far better to beat out now, as the sails were already up, and save the diagnosis and repair for later.

We had no trouble squeezing out of the cove’s eastern exit on starboard tack and were soon beating up Lucksee Sound into a 12-15 knot SW breeze. Perfect sailing conditions. And just enough motion to get the little girls, who had been romping around down below, to feeling a little queasy. In between throwing in a tack now and then, convincing the increasingly grumpy girls that they would be better off on deck, and having a bite of lunch to eat, we did manage to remove the back of the ignition panel. We studied the nest of wiring there, poked at it with a multimeter, and confirmed there was indeed no power. The ground was fine, but the positive lead was stone dead.

Guy urged there must be a breaker or a fuse for this circuit. One would think so, but damned if I knew where it was. There is no such switch on the main panel, and I couldn’t remember ever seeing one in another location.

The circuit for the autopilot, which just then was steering the boat, is immediately adjacent to the ignition panel, so Guy suggested we get a bit of wire and jump it to the ignition circuit. We tried this, and the circuit instantly came back to life, but when we pressed the starter button… splat. The same thing happened as before.

Now both the ignition and autopilot circuits were dead. Fortunately, the breaker for the autopilot is very easy to find (clearly labelled on the main distribution panel), and this circuit, at least, was soon revived.

By now we were in open water, with Eleanor and Lucy huddled on deck under blankets like refugees round the foot of the mast. I saw we could easily sail into Whitehead Passage, between Peaks and Cushing Island, where we could anchor and easily sail out again if we had to. As soon as we were in the lee of Cushing Island, the girls sprang back to life and were again roaming busily through the boat’s interior and all about the deck as we dropped both the sails and the anchor.

Guy now proposed that we use an extension cord to jump the ignition straight from the cranking battery. This sounded exciting, but made me nervous. I reckoned we needed to start ripping up floor boards, so we could trace the ignition wire and suss out all the connections between the ignition panel and the battery. But I really didn’t feel like doing this with the girls bouncing all around the boat like pinballs.

Then I remembered… that very morning I had inserted into my wallet my new membership card from BoatUS, which had just arrived in the mail, and on that card was printed the magic words–Water-Towing: Unlimited. 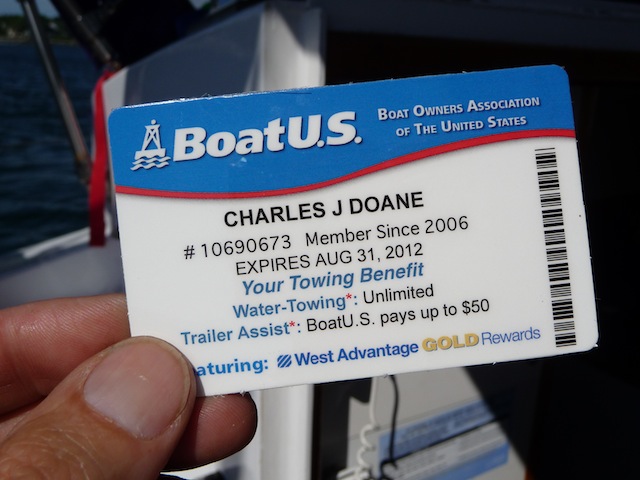 So I punted. TowBoatUS Portland came back instantly on the VHF radio, and within half an hour they had a line on us and were methodically dragging us back to the dock at MYC.

Next morning, while driving into the comic office in Boston, I punted again and called MYC to ask if they could take a look at the ignition circuit. A few hours later they e-mailed back:

We found that the resettable 20amp breaker on the engine was tripped. We reset it, checked some connections, started and stopped the engine several times, and could not repeat the problem.

I remembered it now, at the aft end of the valve cover on the engine’s starboard side, a mysterious little button marked “Push to Reset.”

I always wondered what that was for.

Meanwhile, over in the Sails & Rigging department: Doug Pope has drawn a picture of the new sail: 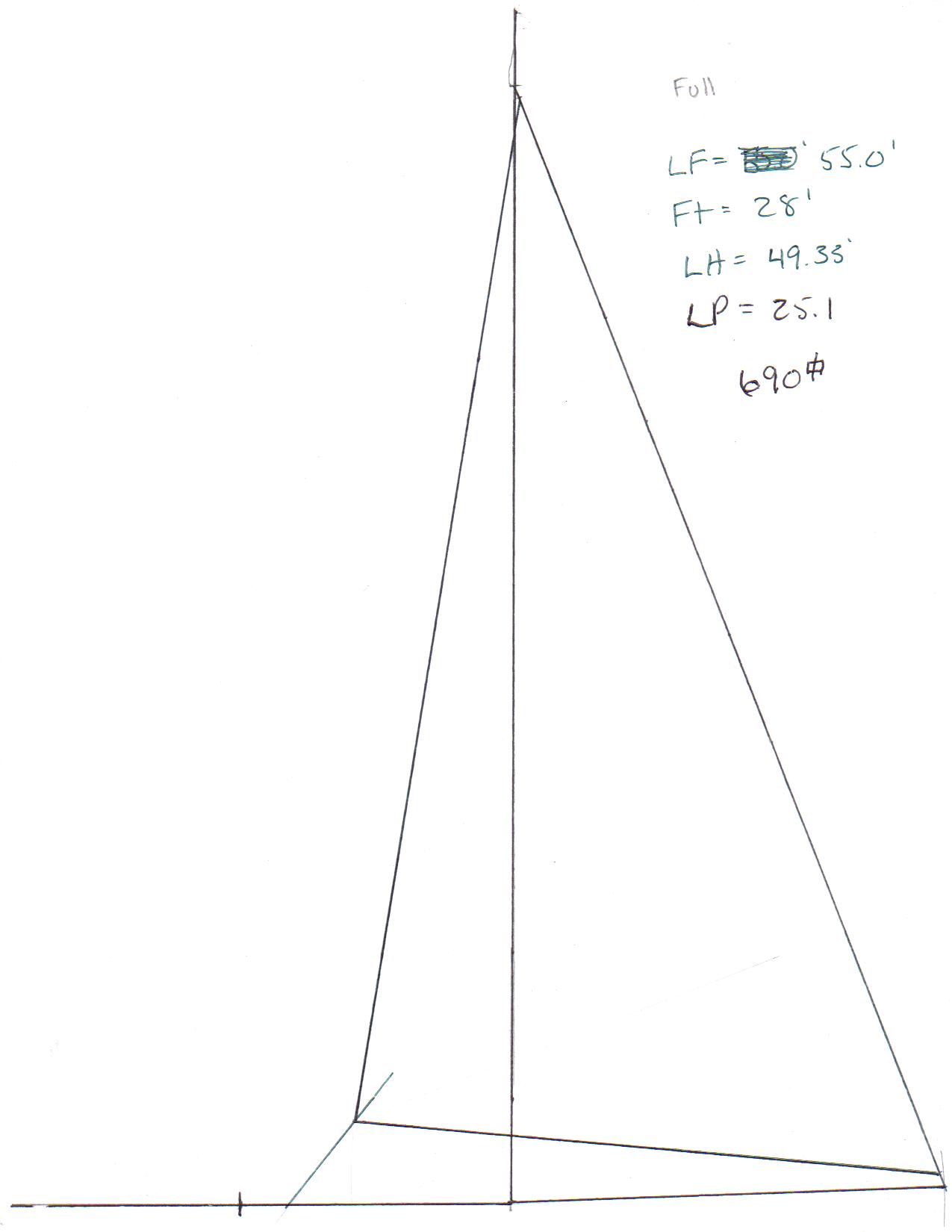 Looks like a screecher to me. I’m totally digging it. T’will be made out a special laminated aramid spinnaker fabric, CZ 60 HP by Dimension Polyant, that is intended for use in Code 0 sails. Here’s a shot of a sail made from the same sort of stuff: 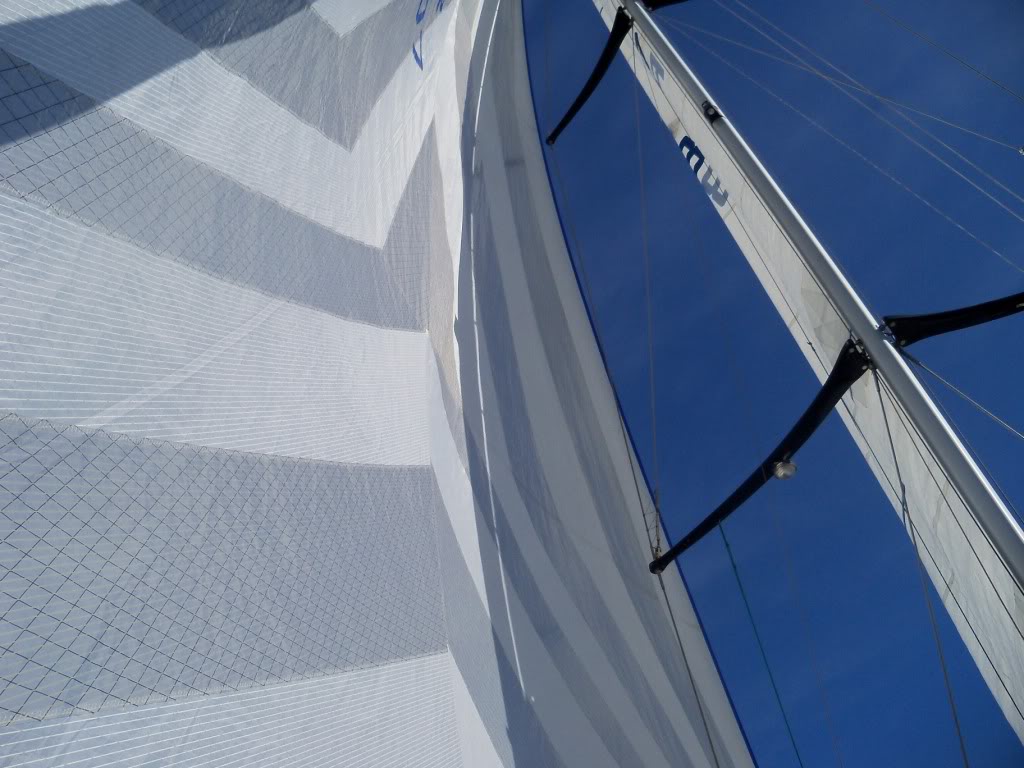 Three things I like about sails: No power required. No wiring. No reset buttons.